If YOU have been looking for a bike to get you over the line and into the world of, well, three wheels in this case, the Tricity could be your answer. 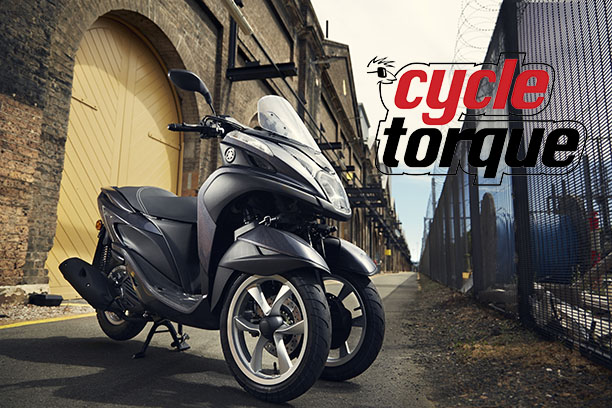 In 2006 Piaggio debuted the three wheeled MP3, but it was never really intended as an entry level machine.

Yamaha has taken the concept one step further, putting the parallelogram link suspension front end into a 125cc scooter. It’s best explained in a picture, but when the Tricity leans into a corner, the distance between the two 14 inch front wheels remains the same.

There is no lock-out system on the Tricity front end, meaning it can always lean.

Yamaha employ what they term a ‘Unified Braking System’, with twin 220mm discs on the front and a 230mm disc on the rear to provide ample stopping power. When both brake levers are activated, the UBS system distributes braking force to the front and rear.

The twin wheel setup at the front doesn’t compromise width. The handlebars are actually wider than the wheels and surprisingly, with a width of 735mm, the Tricity is 3mm narrower than the PXC125.

Under the seat there is decent storage, enough to take a full face helmet, while up front there is a hook for a grocery bag.

In what may seem like overkill, the Tricity project leader is none other than Kazuhisa Takano, who is better known for his role developing Yamaha’s MotoGP bikes – the YZR-M1 in particular. Takano injected MotoGP influence by keeping the weight distribution bias at 50-50 front to rear, resulting in an agile, easy to handle machine.

The powerplant is a relatively small 125cc 4-stroke liquid cooled unit with a CVT transmission. If you have owned or researched 125cc scooters you will know this means fantastic economy. 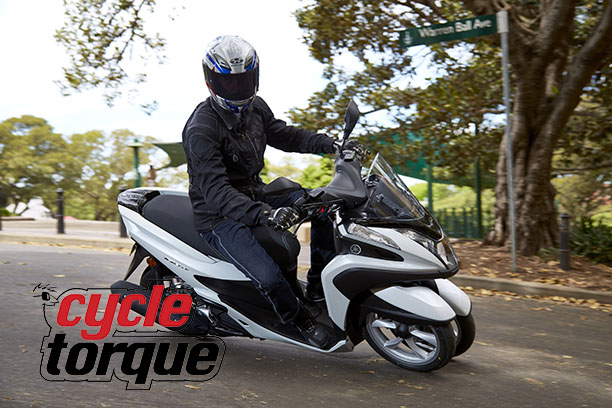 During the launch, Yamaha set up a nifty ‘gymkhana’ style course for the assembled media to highlight the differences in the Tricity to regular two wheeled scooters. There were all sorts of riders present from different magazines and walks of life, with the goal to show just how easy it is to jump on and ride the Tricity. 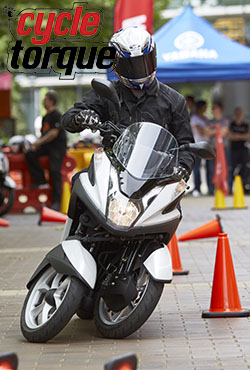 Tight, low speed corners, water and confined spaces were all very easy to navigate – overall it felt like a very forgiving little bike.

The first thing I noticed was, of course, the front end. With three wheels you can tip into corners at any speed with confidence, knowing the extra contact patch with the road will hold you up. You can climb up and down gutters and take slow corners with ease.

If you have ridden a small wheeled scooter before, you will be familiar with that light feeling in the front end. Small diameter wheels and light weight give basically all scooters that characteristic.

They handle well enough, but it can give you the odd anxious moment – especially in the wet. The advantage is that the steering is very direct, but it can feel light and airy underneath you.

With the three wheeled configuration of the Tricity, that feeling is removed.

In a nutshell, that is the biggest thing you will notice – a much more secure front end.

What it means in the real world is for people that have been a little unsure or hesitant about buying a scooter in the past, there is now one less barrier to starting out. The feeling around corners is one of security.

A lot of the other performance features are very similar to your typical 125cc scooter.

I think the 125cc 4-stroke engine is adequate to get around the city – it won’t quite do freeway speeds of course, but it is still rapid enough from the lights.

As other riders were demonstrating on the day, the Tricity can also take a pillion without any dramas. I have owned 125cc scooters in the past and find that engine size perfectly fine for two up commuting in the city.

The handling benefits of the Tricity make it that little bit easier to move between traffic, important if you live in a choked city like Sydney.

The bike was ridden through varying conditions on the day, ranging from tight inner city streets to a coastal ride out to Watson’s Bay. In all cases the Tricity handled very well – agile in the city and able to soak up the bumps when the streets opened up a little.

You can get a little bit of scraping around corners, but I think that is largely due to the increased confidence in the handling. Having dual discs up front on a machine that weighs in at 152kg wet is a bit of a luxury – and I found out you can even detach the linked braking system if you want, by disconnecting a cable on the right lever.

All the other elements are what you would expect of a modern commuter. Instruments are clear and easy to read and LED’s are used all around. 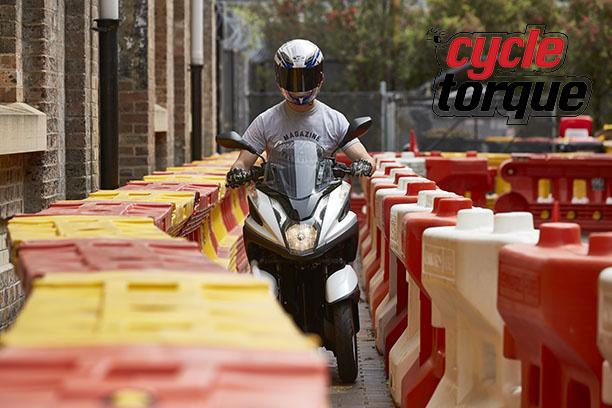 The Tricity was designed with beginner riders in mind, with an aim to deliver a more affordable and secure handling package while keeping all the regular benefits of two wheels.

Yamaha has delivered on this in good style and with a price of $4,999 (ride away), I think a lot of people may have finally lost their last excuse for not riding.