Please welcome a new nutter writing for Cycle Torque – Trip Henry. If you find the going tough, harden up and get to the end – it’s worth it.

Allow me, and forgive me for the waste of time you are about to endure if you proceed with reading this journal. I am no wordsmith, but more a simple man who enjoys the company and experiences of other like-minded twisted souls. They happen to ride motorcycles amongst other tantalizations. 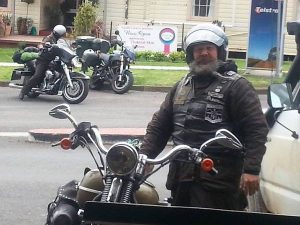 To set the scene fair and just, we were a long-suffering group of members of an organisation (a social motorcycle club) that simply would not progress into a fair and honest future, so, like many before us, we opted to start anew (yet another Social Motorcycle Club). A year is now upon our mighty group of swashbuckling riders, and to celebrate this momentous occasion we needed to find a den for soirée, where bonding and the telling of tales as true and greatly exaggerated deeds can occur, combined with the serious business of oenology, or simply put the study of wine (disappearing) and maybe a few ales as well. 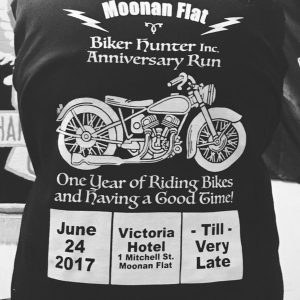 It’s April in the Year of Our Lord that does not matter, but not long ago, we assemble and headed off like rally virgins, full tanks and great wonderment of the pranks, joy and camaraderie of fellow confrère. As most overnighters develop into novels of their own with unforeseen twists and turns with every empty glass being replaced by a reborn cold entity that encourages more stories and more “truth’s” than one would, or should not, share with fellow connoisseurs present. The assemblage of riders discuss the destination at our first fuel replenishment, as the MV Agusta has a range close to 200km and we are more than half way to the Victoria Hotel at Moonan Flat, which is, as many riders know, a popular watering hole for motorcyclists. 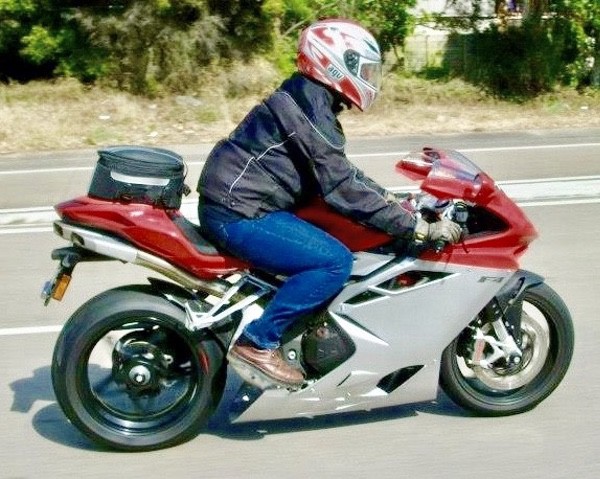 One of our intrepid party, Aunty, suggests an alternative route via some twisties with the caveat, “there may be some dirt however”. This remark when translated into realism meant “there may be some tar sections, though not many”, so with Aunty on his Buell Ulysses and myself following on my Springer Softail (with a tank shift and rocker foot clutch), we head off into the backwoods and wilds somewhere between Pages River and Gloucester Tops. A microsecond after turning off and waving adieu to the more intelligent members of our group, we had been consumed by the dirt. 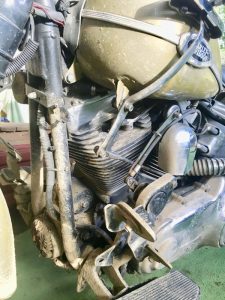 That’s when the rain started, a full second after that the tar ended, and the Goddess of Traction “Pirellus” also bid us a fond au revoir. The Uly and Springer were now on the slippery slope of much laughter and in the business of “loss of control” at nearly every point of the journey! Just before the fog fell upon us, the path narrowed to a wide goat track, festooned with pot-holes boulders and ravines that fell away into an abyss of white haze and grazing land. The cattle had two long legs and two short legs, for easier grazing on this slope! Oh! What is this? Yes, that’s right, hail, and Aunty said it “would be fun, and what could possibly go wrong?”

Adding to this little side adventure of near-death slides, slips and much closing of the eyes whilst performing all range of stunts, at the next tight corner what do I spy? Alas, a Range Rover, pulling a horse float! What sort of clown would be driving down this track towing a trailer doing these speeds? I don’t recall how we both passed the vehicle, as we were both travelling way too fast for the conditions, however, I do remember the look on the female drivers face, which was of great perturbation as we passed by, it was like something out of Swan Lake, the horror version, arms, legs, trailer, car, two grown men screaming and crying and then, just like that, the hail stopped, and all was well as both blood and courage returned to the riders.

You might think things didn’t quite go to plan however, but, it’s about the journey and not the destination, and it was more mostly more fun than putting your hand into a blender. We made it to the camp covered in mud, our brothers and sisters cheering, for we were a little late. Then began the earnest celebrations. The stories became bigger and better, we laughed, we drank and all was right with the world again. 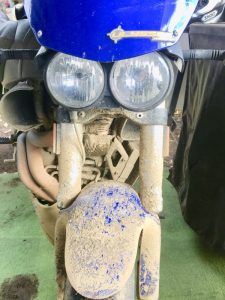 However, note to self: Never trust Aunty! Especially if he says “what could possibly go wrong?” Seriously it was a hoot of a ride, two impaired riders who, frankly, Should Know Better, soaking wet, lost in the back hills. The most fun you can have on a bike, and, without hurting ourselves. All in the company of a fellow lunatic motorcycle rider.

Thanks for the journey Aunty.

Italy. No tour bus. No stinking hire cars. No plans. Just cool bikes, like it should be. Thanks to HP Motorrad […]

Red Bull has released a fantastic documentary about Toby Price, who finished third in the Dakar this year after winning in 2016.