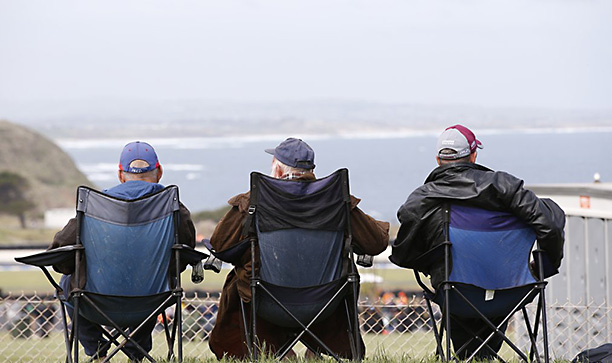 Phillip Island is known for tossing up some of the world’s greatest motorcycle racing.

There were five riders in contention for the MotoGP championship, but with the recent news of Valentino Rossi breaking his leg in a training accident, realistically we’re down to four.

Phillip Island is some eight weeks and 75 championship points away, which wouldn’t have seemed as far to Rossi (currently fourth, on 157pts) as it would to Dani Pedrosa (fifth, 148pts) before news of Rossi’s accident broke.

Anything can and will happen on the road to glory.

We know this because ‘anything’ has happened many times before.

Come October 20-22, there’s every chance the Phillip Island race will create talking points which will echo in motorcycling’s history books for the next 10 years.

Phillip Island was a scene of celebration in 2007 because Casey Stoner had just tied up his first MotoGP championship three weeks earlier in Motegi, Japan.

Stoner came sixth at a drying Motegi circuit, his worst result of the season, but the championship contenders faired far worse – Valentino Rossi led the race but suffered a front tyre issue, eventually finishing 13th and Dani Pedrosa did not finish the race after a highside crash on Lap 15.

Stoner celebrated in Australia by winning the race, and with that confidence, he would take another 45 out of 50 points in the last two races.

In 2011, Stoner went and one-upped himself, winning the race and tying up the championship at Phillip Island, on his birthday no-less.

The race weekend was not without drama, Jorge Lorenzo was forced to withdraw after the warm-up, crashing and losing part of his pinky-finger.

With Lorenzo ineligible to score points, Stoner had to win the race in order to celebrate with his home fans as World Champion.

He took the race by over two seconds from Marco Simoncelli, who tragically lost his life at the next round at Sepang, Malaysia. That race was sadly abandoned.

In 2012, the Phillip Island circuit was resurfaced which made for a chaotic spectacle the following year.

The circuit surface ended up providing so much traction it tore even the hardest tyres to pieces after a few laps.

Race control decided in order to have a decent race, it would shorten the race from 27 to 19 laps, and make riders pit for their second bike within 10 laps.

With a 19-lap race and riders permitted no more than 10 laps it meant a pit-stop had to occur at the end of lap nine or 10.

Marc Marquez, in his rookie MotoGP year, forgot and was promptly black flagged.

The 2013 championship ended up going down to the wire, with Lorenzo taking maximum points from Phillip Island onwards, but Marquez did enough to win his first championship with a second and a third in Sepang and Valencia, Spain.

Phillip Island has also played midwife to the birth of Rossi and Marquez’s animosity.

Marquez bowed out of the 2015 championship by crashing too much, leaving it a two-horse race between the Yamahas of Lorenzo and Rossi.

It overshadowed one of the best races ever held at the circuit, a ding-dong race between the top-four riders with more than 50 overtakes between them.

An unlucky seagull, named Gavin, got in the way of Andrea Iannone’s fairing, so he head-butted it, and put on one of the best double-overtakes in recent memory, slipping underneath Marquez and beating Rossi around the outside by a matter of inches.

After the race Rossi said he felt that Marquez was controlling his pace to give countryman, Lorenzo, a championship advantage.

This was something Marquez, the race winner, vehemently denied.

Marquez said winning was enough proof he did not, furthering that he would only consider helping a team-mate.

We all know how that turned out…

The boilover at Phillip Island lead to an incident at Sepang which nearly broke the Internet!

Rossi and Marquez were battling hard for third place, Rossi parked it in the middle of a right-hand turn, appearing to kick Marquez from his bike.

Rossi was forced to start the final race at Valencia, Spain, from the back of the grid and lost three championship points.

This made it all-but impossible for Rossi to take his 10th GP crown.

2016 was the first year of Michelin tyres and unified electrics, and it’s no coincidence the season threw up more race winners than ever before.

Crutchlow won the race around the Island, by over four seconds to Rossi, who made his way to the podium from 15th place.

It was also Suzuki’s first podium since 2006 at Phillip Island with Maverick Viñales.

Chris Vermeulen finished second on the GSV-R, a V4, some 11 years ago.

That’s a story for another day.

Pedrosa celebrates first win of the season at Jerez

Honda Repsol Team’s Dani Pedrosa claimed his second Jerez victory on Sunday afternoon. Team-mate Marc Marquez made it another one-two finish after he dived past Jorge Lorenzo for second place at the final corner. […]

Australia has retained the International Trophy for the teams’ event at the 2014 Australian Motorcycle News International Island Classic at Phillip Island over the Australia Day weekend. […]

A stellar line-up of current and former stars of Australian motorcycle racing, including four world champions, has been confirmed for the Baylisstic Scramble invitational flat- track event to be held alongside the 2015 Superbike World Championship opener at Phillip Island from February 20-22. […]