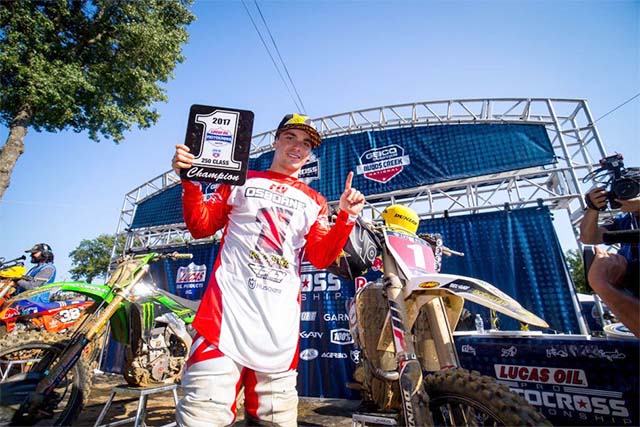 12 years after turning professional Zach Osborne has capped off an incredible year where he not only won his first AMA Supercross Championship in the 250 East class but he also convincingly won the AMA 250cc Motocross Championship with a round to spare. But the fact is that it hasn’t been plain sailing for the likeable Yank and here is his story.

Zach Osborne was born on the second of September, 1989 and by the time he was five years old the Virginia native was hooked on dirt bikes and it wasn’t long before he was a regular at the front of the pack going on to win the World Junior Motocross Championships at Latvia in 2004 and several Loretta Lynn Championships on KTM machinery.

Zach’s first professional race was at Daytona in March 2006 where he finished a credible 14th place after a first turn crash but from there the successes of his amateur days failed to carry over into his professional career and things became tough for Osborne with the industry insiders criticising his work ethic, or apparent lack of, but the fact was that Osborne was battling an energy sapping illness.

Top teams weren’t keen on signing the stocky Osborne and it was during the 2008 season while struggling with the Yamaha of Troy team Zach took off to Europe to contest the final few rounds of the World MX2 Championship and the British Motocross championship for the Bike-It Yamaha team where he picked up a moto win in both championships.

Season 2009 didn’t go to plan with several injuries putting pay to a good result but Osborne did win the Turkish GP but in 2010 Osborne finished the championship in fourth place behind Marvin Musquin, Ken Roczen and Steven Frossard and that was the year that Zach also won the British MX2 Motocross Championship.

In 2011 Zach finish the World MX Championship in 8th overall despite missing the final five rounds to injury then in 2012 Osborne competed in a handful of 250 West Coast Supercross races aboard his own Yamaha where took two podium finishes and earned the attention of Mike LaRocco and the Geico Honda team.

Zach returned to Europe for the 2012 GP season but suffered an injury during a preseason test and missed the first seven rounds. His immediate speed after his return put him in the top-five numerous times and he finished the MX2 GP season 15th overall.

Throughout the 2013 and 2014 AMA Supercross and Motocross seasons Osborne put the Geico Honda on the podium several times but a race and/or overall win eluded the speedster. A change to the Rockstar Husqvarna team in 2015 and 2016 saw similar results with one outdoor win and plenty of second and third places but no championships.

Then it happened! It was the second round of the 2017 AMA 250 East Supercross Championship in Atlanta where Osborne scored the main event win before backing that up with a win in Toronto the following weekend and to really put the cat among the pigeons, Zach won the penultimate round at East Rutherford leaving himself, Jordon Smith and Joey Savatgy separated by one point going into the final round in Las Vegas.

If that wasn’t drama enough all three title contenders crashed during the main event and with two corners to go Osborne had to pass Savatgy to win the title and that is exactly what he did with a bar-banging passing move that eventually ended with a fine by the AMA but Osborne had won the championship.

Move forward a couple of weeks and Zach is lining up at Hangtown for the opening round of the 2017 AMA 250cc Motocross Championship and you guessed it, he scored the win before also winning Glen Helen, Red Budd and Southwick then wrapped the title up at Budds Creek with a solid second place.

So what now for our hero? “I’m going to defend the supercross, and I want to ride the 450 outdoors,” he said. “It’s something I ride every week at home and I’m making good progress with. So, it’s an opportunity that I’m looking forward to. I’m 27, about to be 28 years old and it’s time to move up. I finally got my opportunity to do so. A lot of people think that those jobs and rides are easy to come by even when you’re a champion, and they’re not. It’s my turn and my time so I’ll be moving up for outdoors next season.”

From hero to zero to hero, that’s the Zach Osborne story.