SUZUKI’S smallest of the Boulevard Touring models, the C50T, is a machine for those not interested in all the latest technological bells and whistles, but someone – or maybe a couple – who’s after comfort, good looks, a low seat and ease of riding. 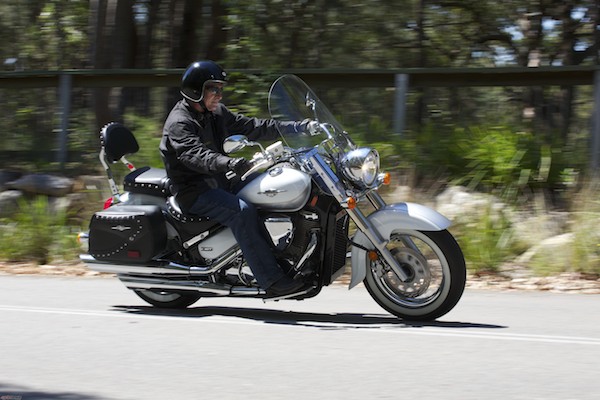 The style
Take a large capacity V-twin, an image of American-made motorcycles anywhere north of WWII, mix in a theme of “White is Nice”, add practicalities like a touring screen and panniers and Suzuki’s engineers and designers popped out the C50 Boulevard.

From its subtle two-tone paint to masses of chrome to the leather-look semi-rigid panniers, there’s not much to dislike about the styling. I especially liked the wire wheels, fat forks and embossed seat.
Taking that seat means your arse is low to the ground, which makes manoeuvring the big beast pretty easy, although sometimes I wonder why more cruisers don’t have reverse, for they’re all difficult to push backwards up driveways and the like.

The pull-back handlebars fall to hand pretty much where you’d expect and the footboards are placed out forward, not quite highway peg style, but certainly a long way forward. Heel-toe shifter is standard, and there’s a big automotive-style brake pedal.
Pillion passengers score a large, comfortable perch, but only footpegs, and they are just in front of the panniers.

The basic instrumentation includes an LCD odometer and dual trip meters, gear position indicator, some idiot lights and a speedo – there’s no tacho, heads-up display, launch control or ejector seat button. Some of those things aren’t even available as options.

Motive force 50 cubic inches is approximately 800cc, and that’s a big bike, although these days it could easily be described as a middleweight: indeed, while we had the C50 we also had the new 90 cubic inch Boulevard Tourer in the Cycle Torque studio, and that’s a seriously big bike.

The C50 will appeal to those not wanting something quite so big and heavy or expensive. And really, do you need the extra capacity? The C50 has gobs of torque right off the bottom of the rev range and the performance probably runs through to redline, but as there’s no tacho it’s a bit hard to tell – not that there’s any need to rev the motor hard anyway, short shift and enjoy the ride.

There’s a range of vibrations which shake the bits of your body in contact with the bike, and whether this bothers you or not may depend on many factors including your gender and disposition toward such things. I found a couple of annoying bands of vibrations through the footboards, but only at some isolated rev ranges.

On the whole the shimmy and shake from the C50 added to the enjoyment of the ride rather than detracted… The motor might be a big V-twin, but it’s definitely a 21st Century powerplant. The fuel injection is impeccable, the power delivery seamless but the vibrations make it feel like a Real Motorcycle. 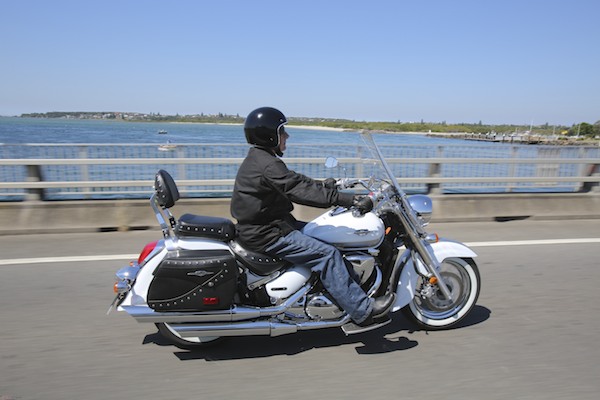 He may be a rookie and on his first visit to Phillip Island, but that hasn’t stopped Briton Alex Lowes setting the fastest time in practice ahead of the opening round of the 2014 Superbike World Championship this Sunday. […]