Tyco Suzuki’s Josh Brookes (above) returned to the podium at Oulton Park to claim second place in race two after suspension problems saw him relegated to third position in race one.

Brookes admits that some changes between the races gave him a better chance to fight for the victory. The Australian made an attempt to pass Shane Byrne (Rapid Solicitors Kawasaki) on the penultimate lap but was forced to settle for second.

Race 1
Alex Lowes (Samsung Honda) claimed the opening victory of the day, but James Ellison scored a determined second place after fighting his way through from tenth on the grid with Josh Brookes in third. Brookes was right up there with Lowes and Byrne when Byrne slid out of contention on lap 12. Brookes tried to hang on to second until grip issues towards the end of the race allowed Ellison through.

Brookes said: “I am happy enough with a podium finish as it is points, but I had a bit of a problem with grip in the race and mid-way through I dropped off Alex and Shakey. I thought they might have a similar issue as me but Alex had a really good pace and deserved that win. For me I knew James was closing but there wasn’t anything I could do about it, so I had to accept the situation and go for the points.”

Ellison was left disappointed following qualifying yesterday as he was unable to set a lap in Q3 as the team aired on the side of caution after suffering a technical issue but the Milwaukee Yamaha fought back in race one. He worked his way up the order and after a duel with Peter Hickman and Tommy Bridewell was able to score a strong second place and a front row start for race two.

Jon Kirkham again secured a top five finish for Buildbase BMW after holding off the challenges from Tommy Bridewell and Peter Hickman who had been battling hard in the opening laps of the race. PJ Jacobsen, Chris Walker and Tristan Palmer completed the top ten.

Race 2
Shane Byrne (below) returned to the top step of the podium in the second race as the Rapid Solicitors Kawasaki rider fought off Josh Brookes and Alex Lowes to claim the win and make amends for his race one crash. 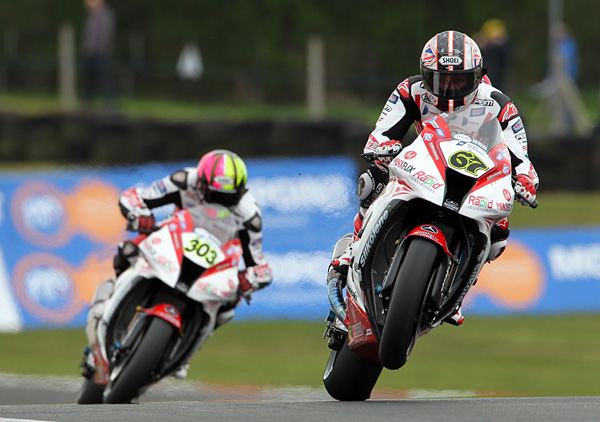 Byrne took the lead on the opening lap from Brookes and Lowes with James Ellison and Tommy Bridewell pushing hard, but behind them a crash between James Westmoreland and Peter Hickman saw their weekend end at Old Hall on the first lap.

Lowes took the lead on the seventh lap to move ahead of Byrne, but he fought straight back with a move at Cascades. The Samsung Honda rider was pushing hard to reclaim the position, which he did with a move at Island Bend. Two laps later and Byrne was able to hit the front of the pack again at Cascades as Lowes was pushed to second with Brookes still tucked in behind the pair in third.

On the eleventh lap Brookes saw his opportunity and moved ahead of Lowes; the race one winner then went slightly off line which allowed Ellison to take advantage and move into third at Cascades. Lowes made his comeback a lap later, passing the Milwaukee Yamaha rider and as the pair changed position three times within as many corners Lowes edged ahead.

Brookes had been closing on Byrne and looked set to make a move and on the penultimate lap he attempted to pass. The Tyco Suzuki rider lost ground and Byrne just had the slight edge then to claim his fourth win of the season.

Chris Walker held a consistent sixth place ahead of an impressive Howie Mainwaring on the MH Kawasaki at their home round of the Championship. Keith Farmer, Tristan Palmer and Josh Waters completed the top ten.