From tomorrow, Friday 1 March, motorcyclists will be allowed to lane filter for two months as part of an Australian-first trial in Sydney.

The trial will take place in the northern part of Sydney’s CBD until 30 April, and will measure potential safety benefits and reduced congestion.

“Lane filtering manoeuvres are against the law in NSW, however there will be an exemption for motorcyclists in the trial area for two months – allowing them to filter past stationary vehicles at intersections,” Centre for Road Safety General Manager Marg Prendergast said.

“The trial will include using video to monitor lane filtering behaviour at selected intersections with traffic lights in the trial area.”

Preparations for the trial began at the start of February, when video monitoring commenced at a number of intersections in the trial area, to allow comparison with traffic flows and road user behaviour during the trial.

Motorcyclists are not allowed to lane filter on the Cahill Expressway, Western Distributor and Bradfield Highway (Sydney Harbour Bridge).

Findings from the trial will be presented in late 2013.

The NSW Police Force CBD Motorcycle Response Team, recently funded by Transport for NSW, will police the trial area to ensure road rules are followed by all motorists.

“This trial will explore whether lane filtering improves traffic flow while not jeopardising road safety for all road users,” Ms Prendergast said. “There will be no change for all other motorists. All road users will need to follow the usual traffic rules which includes being mindful of motorcycles on the road.

“This means checking twice for motorcyclists when pulling out or changing lanes.” Electronic signs beside roads approaching the trial area will remind motorists of the trial.

Lane filtering for motorcyclists during the trial

Motorcycles moving between stationary vehicles at intersections.
Motorcycles travelling within the lane, on the lane line and/or into the adjacent lane when filtering.

When lane filtering, motorcycle riders must follow the below conditions:

Motorcyclists are not allowed to travel through moving traffic (lane splitting). Riders must not overtake to the left of a vehicle which is in the left-hand lane. When traffic is queued at intersections, riders must stop at the intersection behind the stop-line.

Riders must not filter in ‘bus only’ lanes. When lane filtering, riders should take extra care:

In turning lanes.
Near buses, trucks, cyclists and pedestrians. Adjacent to parked vehicles.
Moving from traffic lights.
Merging back into traffic.

Motorcycle riders will be exempt from the following road rules in order to allow them to filter within the trial area between 1 March 2013 and 30 April 2013:

Drivers/riders on a multi-lane road must not move from one marked lane into another marked lane by crossing a continuous line separating the lanes (rule 147). 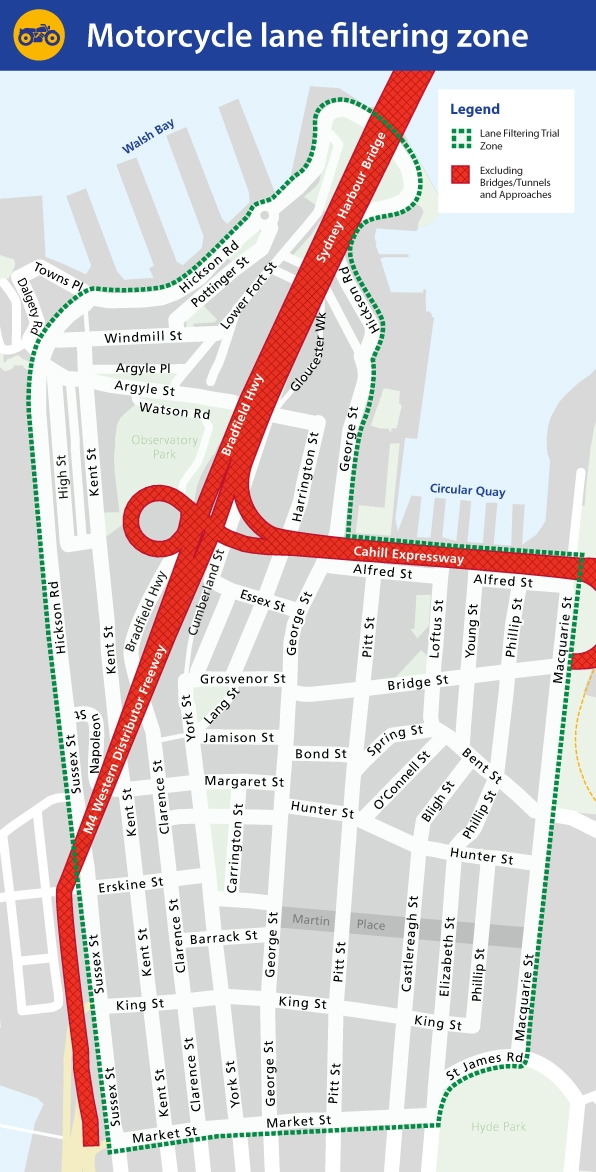