AFTER its groundbreaking release in 2010, with the backwards engine design and mass centralisation concept, the current generation YZ450F has had quite a controversial impact on the off-road motocross market.
Its reviews and success have been both up and down, with some riders adapting easily and feeling right at home, like we do, while others struggle to find confidence and comfort on the unique machine. 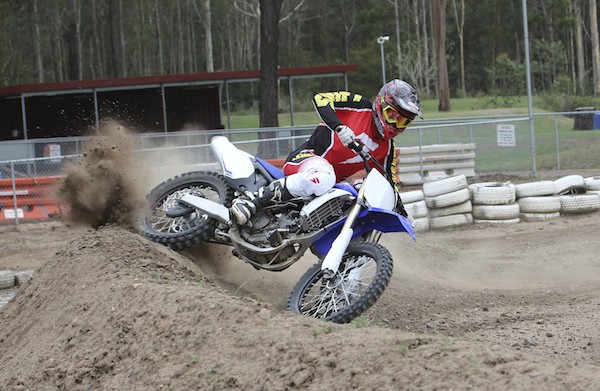 Yamaha enjoyed the success of claiming two straight Australian Motocross Championships in 2010 and 2011 in the capable hands of CDR Yamaha and Jay Marmont, yet battled through the epic failure that was James Stewart’s attempt at an AMA Supercross Championship in those very same seasons.

Yamaha has implemented minimal changes to the YZ450F since its 2010 overhaul and the 2013 model receives only minor cosmetic changes from MY12, with new graphics, a white rear fender and new Yamaha-branded black handlebars. The engine and all of its internals stay the same, with its rearward slanted DOHC titanium 4-Valve design.
Tucked away up front under the fuel tank, a Keihin EFI system takes care of the intake duties, while the tornado style exhaust exits the rear of the cylinder, twists around under the seat and exits out the rear like a traditional exhaust.
Kayaba do an amazing job on the suspension on the YZ450F, with the KYB units renowned for their quality, performance and durability. Dunlop recently released an updated front tyre in their Geomax Series, the MX51FA, which is standard equipment on the Yamaha and matches the MX51 rear tyre. 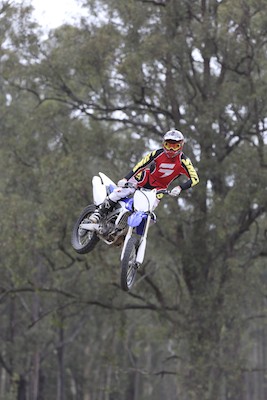 There is absolutely no shortage of power on the YZ450F. Almost immediately after hitting the track, you notice that the YZ has plenty of power and if you’re game enough to twist the throttle fast enough, it comes on with quite an aggressive hit. The responsive engine has plenty of power right off the bottom and stays strong right through the mid-range and high into the rev-range.
Once you get the big YZ revving, the power isn’t as strong as some of its opposition and seems to sign off a little bit early.

This isn’t really much of a problem though, as much as we all think we’re pretty quick on a dirt bike, there are very few riders out there, including us, who can hold a 450cc motocross bike wide open for any more than a few seconds. For our test we were lucky enough to have Yamaha’s ace tuner and race mechanic Darren Thompson along to make sure we were happy with all of the bike’s settings.
Darren brought his GYTR Power Tuner for us to try out some of the different power mapping settings that he has developed over the past few seasons working with some of the most experienced riders in the business.

We were offered settings from mild to wild and it was very interesting to see how a few small changes on fuel mapping affected the entire behaviour of the engine. We settled on a map which was slightly de-tuned from standard and it was simply down to personal preference and track conditions which determined our choice.
We also enjoyed the standard map, and a more aggressive map which is one of the race team settings, however on the hard-packed blue groove test track, we were constantly looking for traction and the more power we gave the bike the harder it was to keep the rear wheel under control.

The GYTR tuner also offers an hour meter feature which enables the rider, or their mechanic to keep a close eye on the time being put on the bike to better control servicing and maintenance schedules. Setting up the suspension correctly is a must on any modern-day motocross bike, we began by setting the rider sag at 100mm and winding the clickers to the middle setting on both the front and rear of the bike.
After a few short sessions we made some small adjustments, we went down further on the rider sag to 103mm and slightly stiffened up the suspension both front and rear.

After that we were very comfortable with the feeling of the bike and happily went lap after lap on the YZ450 for the rest of our test day.
As usual, the controls are all top class products and felt comfortable right from the get go. It’s as easy as setting your lever heights and bar positions with a few spanners and the big YZ feels as good as any in the cockpit.

The YZ450F may get a bad rap from some, but from us here at Cycle Torque we think the Yamaha is a fantastic bike.
The YZ offers unmatched durability and more power than you can poke a stick at, it handles great once it is set up right and with additional features available like the GYTR power tuner a catalogue full of GYTR hop-up parts it becomes very hard to look past the YZ.