Although I like slipper clutches I’m not reliant on them when riding at the track. By that I mean I don’t really care if the bike has one or not.
I still reckon the best slipper clutch I’ve ever used was on the Ducati Desmosedici.
While I can’t confirm if the DB8 slipper clutch was 100 per cent as good, it was still impressive.

Hard under brakes into Turn Two at EC you could go down three gears and let the clutch out with no wheel hopping or any other shenanigans.
The only time I didn’t like the way it worked was going down a gear for Turn One. It almost feels as if you’ve hit neutral for an instant and it’s a bit disconcerting when you first experience it.

Now, having said that, I think every other slipper I’ve sampled at EC feels the same going into Turn One. Anyway, overall I like the DB8’s slipper clutch.

And don’t those Brembo four piston calipers stop you in a hurry. There is some serious initial bite, and the power is amazing. Some of the best brakes I’ve ever used.
But to be honest I can’t remember the last sportsbike I rode with lacklustre front brakes.

On road It’s uncomfortable and uncompromising but you already guessed that didn’t you? The same ‘wallow’ I felt from the front forks on the track was evident on the road but less pronounced.
Still, if I had the bike for more time I would have played around with the forks to make it better.

The rear shock was faultless on the road ride. 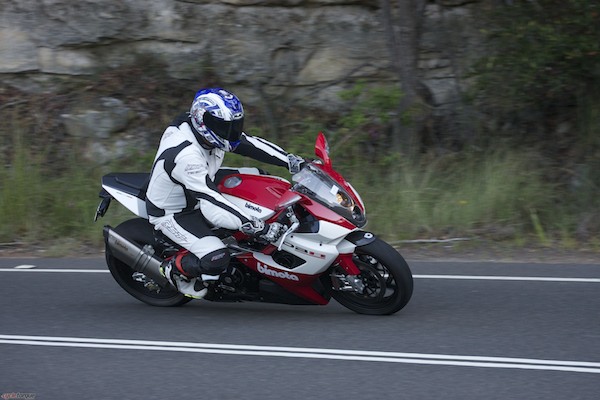 Wrap up
I’d love to own a DB8 SP but not for regular road riding, and I suspect this would be the case for most people contemplating the purchase of such a special machine.

On the right roads the bike is glorious to ride, and when used in this context the comfort level is almost irrelevant. I should clarify that. It is reasonably comfortable to ride on good roads but it’s when you venture on to our crap regional roads that comfort with this type of machine becomes an issue.

I wish I could have got into the minds of all those track day punters who were drooling over the bike. I probably would have heard everything from wanker to lucky bastard. I’d like to think I was a lucky bastard.