It does have fully adjustable Marzocchi forks and, exclusive to Bimota, an Extreme Tech shock, or traction and compression unit in Bimota speak. I’ve never even heard of Extreme Tech but the company has done a good job of the shock.

Brembo brakes are fitted – it would be odd if they weren’t – and it weighs a scant 164 kilos. I can’t tell you off the top of my head how this compares to an 1198 Ducati, or an Aprilia RSV4 for example, but I can tell you it’s very bloody light. 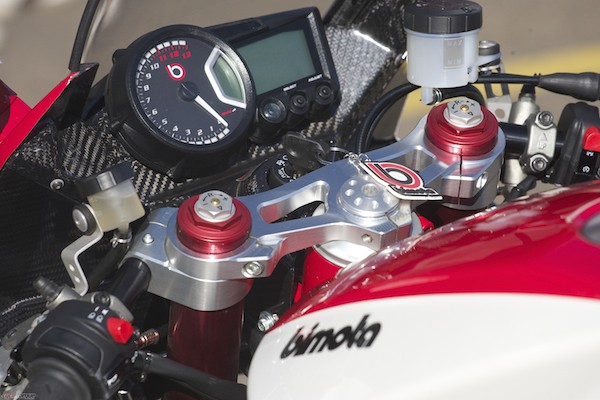 Now to the engine. It’s an 1198cc V-twin engine from the Ducati 1198. It has four valves which are operated by Desmodromic principles. It’s got 170 horsepower and it goes very fast.

The engine needs no explanation in my opinion, and if you need any more info then Google it. On track Two of us rode the bike at Eastern Creek, and between us there’s 20 odd kilos variance.
‘Biggles’ Newton softened the fork compression but didn’t toughen the shock for his two sessions.

He was happy with those settings but when I rode the bike I found the forks ‘wallowed’ slightly during the transition from braking to entering the corner. Not enough for me to bother about changing them though. The rear shock was fine.

Gearing as tested was for the road so it wasn’t pulling wheelstands and such out of corners like it would if set up for track days or racing.
I would have liked one tooth off the front sprocket but then again it depends how you like your bike to be – wild and woolly or more predictable.

It starts and sounds just like an 1198 but does feel different to ride. It’s very hard to explain, just a feeling I had on the day. I think this is due somewhat to the chassis set up.

For example, I found the front end wiggled at full noise down the main straight but ‘Biggles’ never expe rienced it. I guess it was down to my extra weight compressing the rear end which took weight off the front. It never felt like getting out of control.

One thing we both agreed on was the bike would lean over so far and then want to suddenly tip in again. As the bike was fitted with road tyres rather than race tyres we didn’t want to explore this part of the bike’s personality so only rode it so hard.
The last thing I wanted was to crash this bike, no insurance on the track and all that.
I gave the bike a fair workout but I wasn’t out to do a Personal Best time if you know what I mean.