I RECKON if you looked at riders of sports bikes say 30 years ago, you’ll find many of those same riders now riding adventure bikes, or adventure styled bikes.

The fact is they are versatile, comfortable and very bloody capable. In the real world of Australian riding you tend to see more and more of these types of bikes, especially in country areas where all the good riding is. 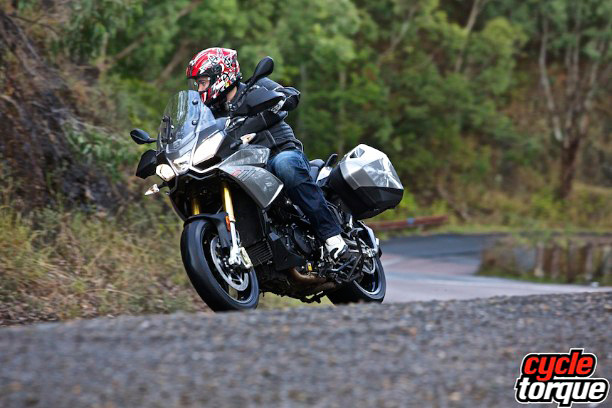 Aprilia isn’t new to the adventure scene, as its previous Caponord versions show, but this is by far the best the company has produced, and it’s one of the most technically adventurous machines in its market segment, and indeed the market as a whole.

Avant-garde Active or Semi-Active suspension is the all the rage at the moment, but it’s only seen on high end models. In the adventure market scene almost every mainstream maker produces a bike with traction control and optional electronic suspension, but not many have suspension which thinks for itself on the fly.

BMW’s new R 1200 GS has it, and so does Ducati’s Multistrada 1200 with the Skyhook suspension. And, the all-new Caponord has it too (Aprilia Dynamic Damping), and it’s not optional here in Australia. You can only buy the full spec model which also has luggage and a centre stand.

The suspension is pretty advanced, it will automatically adjust the pre-load on the rear shock if you throw a pillion on, or put gear in the panniers. Believe it or not it will even adjust the rear shock as your fuel load dissipates, and it does this on the fly. 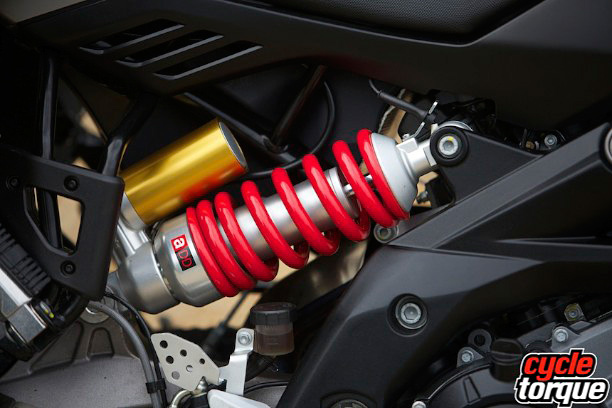 It adjusts the compression and rebound damping on the fly too. If you are in cruise mode the Caponord’s brain will realise that’s the case and tailor the damping to suit, and if you are in thrash mode then it caters for that too.

As you ask more and more of the engine, the bike’s suspension will firm up just enough to suit. Impressive. But the automatic pre-load adjuster only works on the rear shock, you have to adjust the pre-load on the 43mm USD Sachs forks manually.

Riding position
Like any big bore adventure bike it’s a comfy bugger to sit on and ride. And it’s not just down to the softer suspension. The actual seat/footpegs/handlebars position is very, very similar to the Ducati Multistrada. I know this because I just sold Cycle Torque’s 1200 Multi which had covered over 15,000 kilometres. 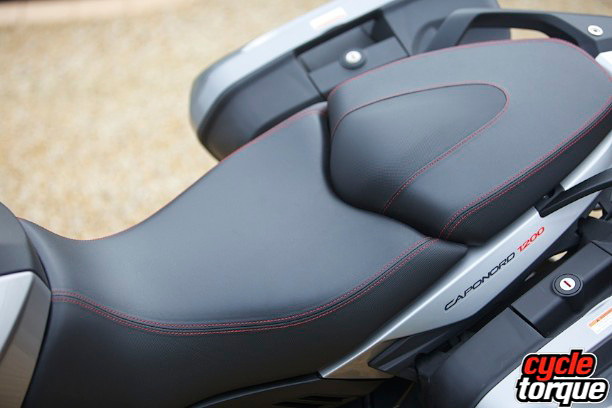 The ’bars feel the same, and the stepped seat is much the same too. I know some riders don’t like separate/stepped pillion seats as they tend to lock you in place, but I found the riding position quite good, and I’m a shade over six foot

Keeping the wind at bay is a manually adjustable windscreen which can be adjusted on the move if you are agile enough, but it’s best off done while stationary.
Some may poo poo the idea of a manually adjustable screen in this day and age but to be honest it’s one less thing to go wrong and you’d quickly work out where you want it anyway.
Yes, I like electric screens but the fact the Caponard doesn’t have one wouldn’t stop me buying it. 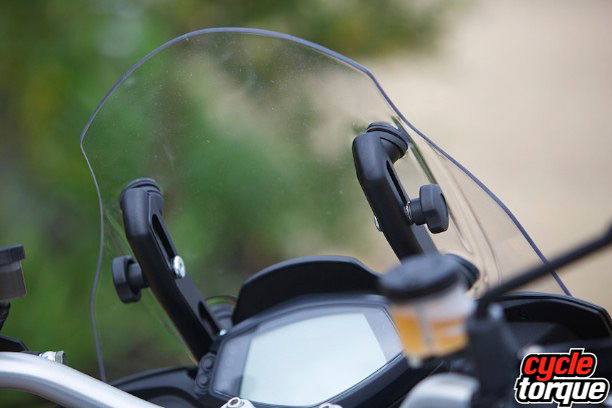 This bike is made to cover long distances over often questionable surfaces. The riding position should be tailored to suit that role, and Aprilia, in my opinion, has pretty much nailed it for the vast majority of riders.

Running gear
With a 1200cc V-twin lurking under the bonnet you would expect the Caponord to have more than enough mumbo for most situations, and it does.

It has the usual modern fare of four-valves per cylinder and a DOHC, and although it’s a potent engine, and essentially the same spec as the engine shared with the Dorsoduro, it’s a reasonably friendly beast.

Like any big twin there can be some chain snatch if you lug it in too high a gear, but once you are used to that you ride around it anyway. Aprilia quote 125 horsepower and that would feel about right. Sixth gear really is an overdrive, and unless you are sitting over the national speed limit you would be better off in 5th or lower as it suits. 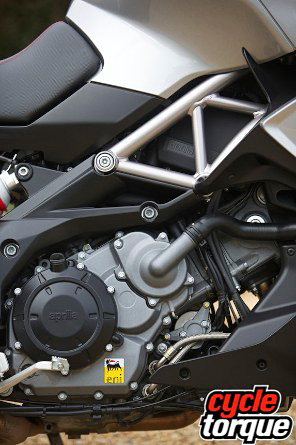 I’ve read reports you need to be in 1st gear around town. That’s crap, the bike is quite happy tootling along in 3rd gear in town. Can you imagine having to ride a bike at 60 km/h in first gear? If you read that anywhere discount it.

The engine and gearbox as a unit are awesome, but I wish the exhaust sounded somewhere near as good as the note from the Aprilia RSV4. I can’t get my head around how good they sound, legally.

I asked myself the question why the Caponord sounded a little strangled and the RSV4 so good. Yes the engines are a different configuration but I hope you get my drift. That was while I was riding the bike, but when I was taking pictures of someone else on the bike I realised how good the big twin sounded as it went past. Go figure.

Anyway, if you want some more ‘soul’ in the exhaust note, you could always go an Aprilia accessory slip on muffler or aftermarket job. 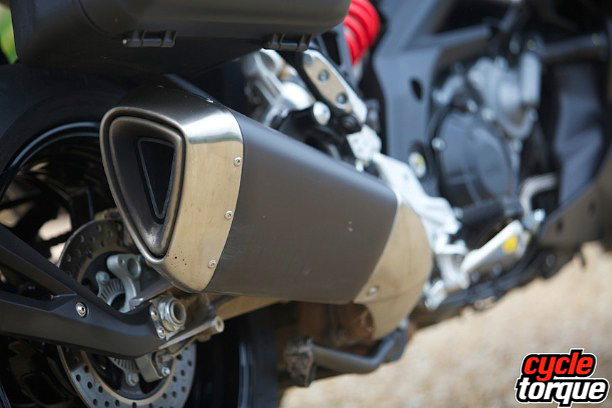 There are three power modes to choose from: Sport, Touring, Rain. They are self explanatory, and can be changed via the start button while on the move. I know for many riders this will seem odd but a number of manufacturers do this now. It will not re-engage your starter motor and wreck the little gears so don’t worry.

Sport is full power, with Touring a softer power delivery, and Rain limits the engine to 100 horsepower. I think you could happily ride the bike all the time in any of the power modes, such is the engine’s flexibility.

Combining with the power modes is the three stage traction control, which unlike the power can’t be changed while moving. You can turn it off if you like, and the system’s memory retains your last choice, so once you’ve enjoyed your coffee and get back on the bike it will be in the mode you last left it in.

Mode three of the traction control is the most intrusive, and you do notice Mode One cutting in when the roads are dry and the throttle turned hard. Riders wanting lots of throttle fun will most likely turn it off.

ABS comes standard and can be turned off as well. Like all modern ABS systems it’s hard to fault, and I think most riders will leave it on, even if they are on dirt roads. 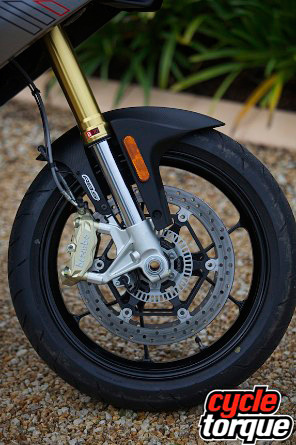 17-inch wheels are front and back, and this more than anything limits where you can ride the Caponord. If you were keen and took it slow you could be quite adventurous where you took the bike, if the conditions are dry, but try to ride quickly in off-road conditions and the tyres will conspire against you.

You have to put this into perspective though, and when I say off-road I mean fire trails and worse. If you are riding along dirt roads the bike behaves very well. Back roads roads is where this bike excels, but not many tyre makers cater seriously for adventure bikes shod with 17 inch wheels.

Pirelli made their 17-inch Scorpions for the Ducati Multistrada 1200, so they would work a treat. Having said all that, most owners would just fit regular sporting road tyres and have fun sticking to the tar.

It depends on what you want to do with the Caponord. As an all-round every road tourer it’s a fantastic machine to ride. And if you stick to sticky rubber and the tar you can ride this bike very, very quickly. It has lots of ground clearance, handles superbly and has the grunt to back it up.

There is really two parts to the adventure tourer market, one where bikes shod with 19inch or bigger front wheels are designed with higher percentages of dirt riding in mind, and those with 17-inch fronts designed for fast and comfortable tar riding over a variety of road conditions, which is where the Caponord sits.

Like a Range Rover, the Caponord is a quick all round luxury machine with off-road capabilities. You’re just not likely to go bush bashing with it.

Ancillaries
Once you get the hang of how to navigate the dash and so on it will be a snack. If you wait and buy one of these second hand make sure you get the owner’s manual otherwise it takes some nutting out. As modern bikes get more and more exotic they have more and more buttons to negotiate.

Winding over the trip meter went out years ago. I forgot that you had to use the starter button to get access to the power modes and after half an hour of frustration I called an Aprilia dealer who put me straight. Easy when you know how.

I like the styling although I’m aware it could polarise opinions. The thing is, I’m not sure how you could make a bike designed to cut a swathe over crap roads look beautiful, but I like the fact it’s not beautiful. If you want beautiful then try an RSV4. 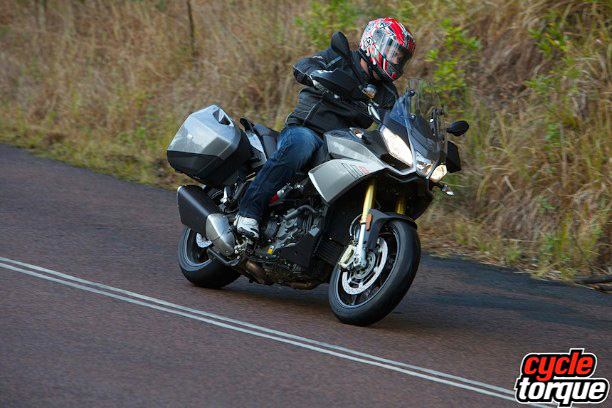 Function is the whole point of this bike and I believe lots of thought has gone into exactly that. The panniers look nice but more importantly they hold loads of gear and are easy to get on and off, and that’s a big plus right there.

Hand guards come standard, and they work a treat. I love them in fact, because with heated hand grips and hand guards you can wear summer type gloves in winter.

Verdict
I was mightily impressed with this bike, and think it will be a good seller for Aprilia. This is a massive market sector in Australia and it’s good to see Aprilia has taken it seriously. I think the competition for the new Caponord is the Ducati Multistrada, the Triumph Tiger Sports, Kawasaki’s Versys 1000, Honda Cross Tourer, Moto Guzzi’s Stelvio, and even the base model R 1200 GS BMW.

There are some crossover customers who may look at harder edged bikes too, but the models listed are very typical of the dirt capable touring machines on offer. They all encompass a number of the old market segments, so I like to call them Sports/Adventure Tourers.

The Caponord is an exciting and capable bike which will take you to places you never really contemplated on a road bike.

The retail price for the Caponard is $21,990 + ORC which I think is great value.