SERIOUS adventure tourers will usually go for a wire option over cast alloy wheels every day of the week. 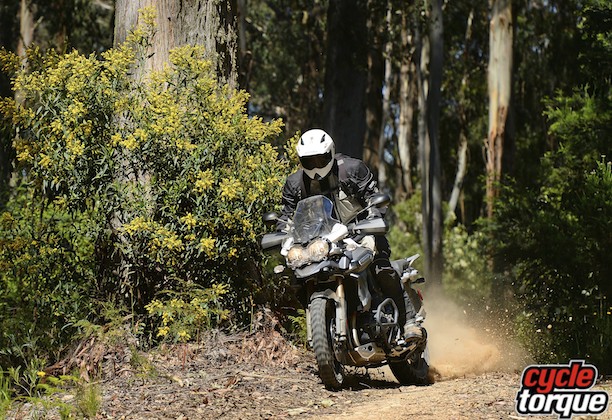 The reason is the wire wheels are usually tougher, and manufacturers usually grace such models with larger diameter front wheels, thus giving said serious adventure riders more off-road oriented tyre options.
When first released you could only get the Explorer with cast wheels, 19 inch front and 17 inch rear wheels with 110 and 150 series tyres respectively. I rode that first release Explorer from Uluru to Adelaide over four days, down the Oodnadatta Track and loved the bike.

There were a couple of dented rims from some big hits on the trip and I did wonder at the time if a wire wheel version would eventually come. That said, there were no deflated tyres from the dents, and for most adventure riders it’s part of the territory.

While the first Explorer launch was about the desert, the spoked wheel version was all about the mountains, and the five day ride took us from Melbourne, through Dargo, Thredbo, Mansfield, and back. Some of the best adventure riding country you’ll get. Two days of mostly dirt and the rest mostly tar. The ride through the high country got me back into the groove with a bike I rate as one of the best I’ve ever ridden. I know that’s a big statement, but as a bike for Australian conditions I believe it is.

There are other fantastic bikes on the market too, especially in the direct competition to the Explorer, and you need to be honest with yourself with regards to what you want out of the bike, and your ability, before making a choice. 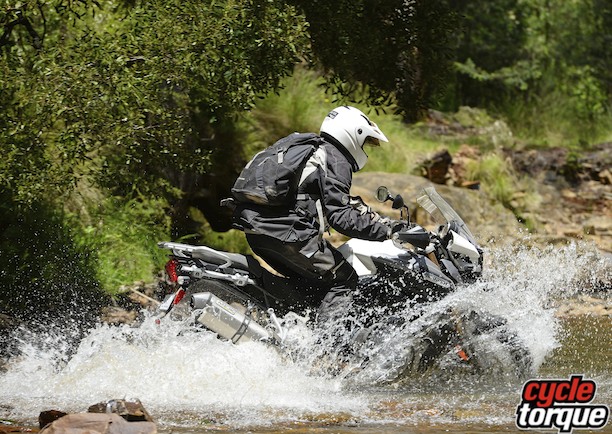 What really makes me love the Triumph so much is the flexible engine and the comfort. The 1215cc three cylinder engine was purpose built for the Explorer, it’s got around 130ps and torque is ‘ample’. Very few engines I’ve ever sampled will let you ride at as ridiculously slow speeds in top gear as the Explorer can.

Part of the reason, besides the torque, is the top three gear ratios seem close, so I often found myself in either 4th, 5th or 6th gear, without realising which one I was in. There were times I even used 6th gear on fire trails. You can rev it hard if you like but there never seems any point, power is there all the time. A neat thing about the engine design is the fact there are no external oil lines.
Designers even put the oil and water pumps into one unit, which is housed in the sump.

That’s something you don’t see every day, and if you are sceptical about the long-term issues with this set up you’ll be pleased to know Triumph has had no warranty claims with the design. Service intervals are car-like too, with oil change services required every 16000 kilometres, and valve clearances checked around double that. Now that is an unstressed engine, and it’s something you can feel when you ride it. 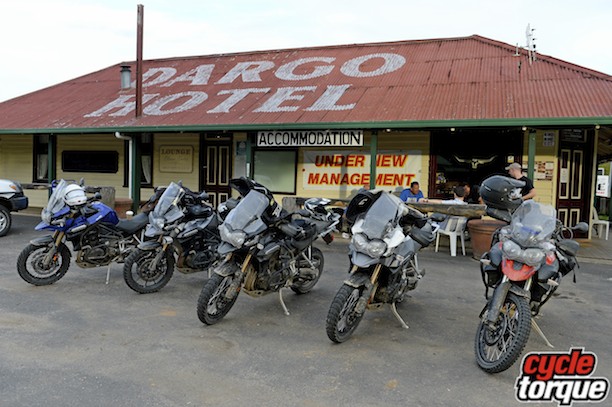 Ride-by-wire technology is used, and this allows the use of traction control, which can be turned off. Levels one and two are available, with one being the most intrusive. ABS is standard too, and can be turned off as well. While on the subject of the dash, there’s loads of information available from the trip computers and the like, and just below it is an accessory power outlet, handy for the GPS unit.
Cruise control is standard also, and works much like a modern car system, easy to initiate and is cancelled by the usual touching of the brakes, clutch lever etc.

The shaft drive is perhaps the best I’ve ever sampled too, in smoothness terms. If you didn’t know you’d think there was a chain driving the back wheel. The main reason is the design incorporates a metalastic shaft, which reduces vibes while still being strong, helped along by the torsional damper, which reduces loading in the transmission. Yes it sounds technical but it works in the real world. And for those out there who want to run everything off their Explorer, including a flat screen tele, there is a massive 950w generator to run all things electrical.
You’d be working hard to overload that.

Ever since I first rode the Tiger 800 I have believed it’s the best seat I’ve ever sat on, and the Explorer is no different.
Yes, it will eventually be a pain in the backside but it just takes longer to do so. There are two seat positions, 840-860mm but you can get a bigger range from accessory seats, 810-895mm. The standard screen is manually adjustable and gives quite a varied range, and the handlebars are too.

Besides the rolling forward of the ’bars you can also turn around the mounts which move the ’bars forward or rearwards. Footpegs have removable rubber inserts, and the riding position as a whole is absolutely spot on for me, at six foot. Sitting down or standing up, the transition is easy, and once on the dirt I found no need to even think about ’bars risers, the bike just ‘worked’ for me in all planes of riding. Kayaba suspension is fitted either end, with the 46mm forks having adjustment for preload only, while the rear shock has adjustment for preload and rebound damping. In most situations I found the suspension almost faultless. 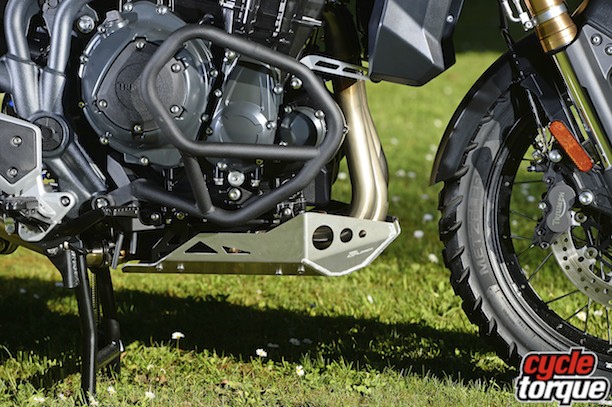 On rough tar roads it just seems to soak things up, and the rear shock preload can be wound off simply with the remote hand adjuster. One of the harder riding testers on the launch had more preload put into his forks but I left mine alone. If you hit a decent bump off road while under brakes the suspension would blow through the stroke quickly, pretty much bottoming out.
This happened to me a couple of times if I got caught out but generally getting off the brakes before the ‘hit’ gave the forks, and me, an easier time. Depending on how serious an adventure rider you are, you could get the valving changed.

My opinion is most Explorer riders will be well happy with the standard setup. Same goes for the shock, I had no issues with it whatsoever, and we took the bikes places most Explorer owners would not venture. In the case of the Explorer it’s designed as an all roads adventure tourer rather than a big trail but you can take any adventure bike some pretty rough places – no, not a Kings Cross pub – depending on your ability.

It’s got some pretty serious travel for a bike like this too. 190mm up front and 194mm at the rear.

Triumph has got a cracking deal at the moment, where for free, that’s right, free, you get panniers, bash plate, engine guards, tank protector, and headlight protector. The accessory range doesn’t stop there though, you can buy lots of stuff, including a top box and an Arrow muffler which my test bike was fitted with. The Arrow does sound great and isn’t too loud. It’s fully legal and your ECU will adapt the fuelling to suit. The centrestand comes standard as well. What’s not to like?

I’ve owned numerous adventure tourers over the years, and the big Explorer is burned into my subconscious as a bike I could have in my garage in a heartbeat, mainly because of the engine and the comfort level. I would use this bike for everything. There are a couple of things I didn’t like, and it hasn’t changed from the first time I rode the model.
Firstly the bike’s brain goes back to standard ABS and Traction Control settings every time you turn the bike off. In the dirt I preferred ABS on and TC off, as I found TC 1 far too intrusive, and even TC2 a bit too intrusive for me. I know lots of adventure riders hate ABS in the dirt but the Explorer’s works well, so after an incident with a slippery corner, me daydreaming, and the ABS off I decided to leave it on for the duration. But the system requires you to go through the settings to your preferred ones every time you restart the bike.

On the road it wasn’t an issue but in the dirt I needed to change it every time. There is an argument that it’s a safety issue and I accept that but I found it a bit of a pain. The other thing I found is the rear brake is too touchy, especially with off-road boots on, which limit the ‘feel’ you have. Adjusting the rear pedal’s height and freeplay will help here, so you don’t have to be as mindful of the pressure you are applying. 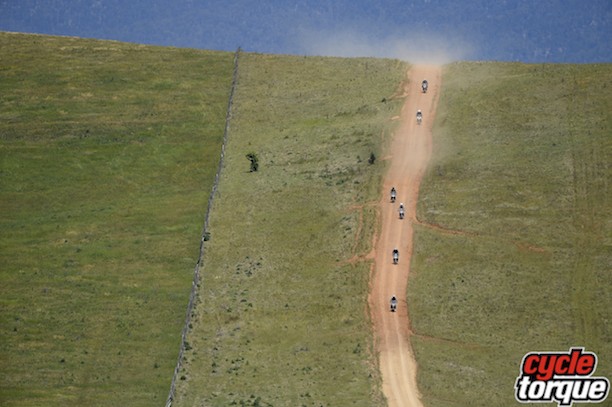 I had so much fun on this bike, and as I’ve spent nearly two weeks riding this bike on two launches I feel I have a good knowledge of how capable it is. I like the idea of the wire wheels, especially the design, which has the spokes nearly vertical, as you’ll see from the pictures, making them look trick but more importantly making them bloody strong.
During the launch I never saw or heard of one dent. The design is for tubeless tyres too, and the fact the sizes are the same 19/17 inch as the cast alloys allows you to go with either decent road tyres or more aggressive ones.

Sure you won’t be fitting knobbies but you’ll still have good choices. My bike was fitted with Metzeler Karoo 3 which I found to be good all rounders. Grip on the road is good unless you are going mental, and they are good in the dirt as well, unless you are going mental.
They should last around 3-4,000 kilometres but you can wear them out much quicker if you are an aggressive rider.
I would buy the wire wheel version over the cast alloy model, because I would want to use the bike off road as much as possible, plus they look great.

Triumph Motorcycles and Indian company Bajaj Auto have announced the beginning of a global partnership, which could mean we could see small-capacity Triumph-badged motorcycles in the not-too-distant future. The companies state the objective of their […]

The Scout Bobber is our most raw and mean machine to date, and the ultimate in the celebration of what motorcycling is about – a powerful engine, two wheels, and no plans of where to go,” said Peter Harvey, Country Manager – Indian Motorcycle. […]

YOU could use one word to describe Triumph’s 2013 Street Triple R, and that word would be effortless.
Well, maybe that doesn’t give you the complete idea of how fun it is to ride, so maybe we’ll throw in exhilarating as well. […]