I WATCHED a show on TV the other day called The Unrideables. It was basically about the 500cc World Motorcycle Championship from 1987 – 1989. Those in the know would remember it was a time when brave riders shined, and these bikes were monsters, hence the title of the program.

In 1987 I was 21 and riding a GSX1100 Suzuki, followed by a Ducati Darmah and so on. I’ve had so many bikes I’ve lost count, but I was an impressionable youngster. Those were the days when I lived for riding my bike. To me these guys were superheroes.
I would stay up late and watch on SBS as Wayne Gardner took on the world’s best riders. Wayne Rainey, Eddie Lawson, Kevin Schwantz, Ron Haslam, Christian Sarron, Niall Mackenzie and even Freddie Spencer when he came out of retirement. 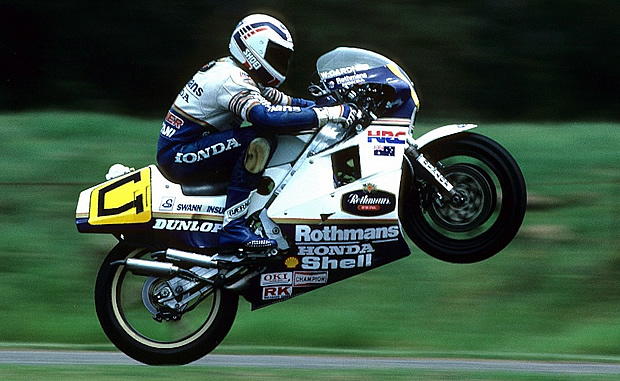 The Unrideables was a fantastic show, and had interviews with most of the riders I just mentioned. In 1989 when Gardner won the Australian GP at Phillip Island I was watching it with my mate Paul Barrowcliff at his place. When Gardner crossed the line we looked at each other and we had tears in our eyes. And he was a tough bastard, that’s how pumped we were about racing in those days.
Wayne Gardner summed it up beautifully when he said you only had to wind on the throttle the tiniest bit more than you did before and you could well find yourself flying through the air on the way to pain city.

It was the same for me when the World Superbikes first came of age. Those who remember watching Aaron Slight and John Kocinski on the Honda RC45 beasts, and Carl Fogarty, Troy Corser and Frankie Chili on the Ducati 916/996/998s will know what amazing racing they gave us. And who’d forget the battle between Troy Bayliss and Colin Edwards for the title in the last round in 2002 at Imola. Guys like Chili would be OK during the year but when he was racing on home soil in Italy he would ride out of his skin.

Some of those races have stayed in my memory banks all these years. I have often been accused of looking through rose tinted glasses when it comes to bike racing but it was certainly a fantastic time for bike racing fans. Try and watch The Unrideables, it’s top viewing. I aim to get a DVD of some of the years I mentioned and see if the racing was better or not. I do find much of the racing processional these days, the very reason why I can’t stand watching V8 Supercars.

I received a letter recently which talked about enduro bikes having their warranty voided if they are ridden on tar roads for any length of time. How the manufacturers actually define what any length of time actually is I’m not sure but my reply was that they are essentially race bikes and would be okay for short distances between the dirt.
I then spoke to Bob of Highway Performance Bikes, a Sydney based KTM dealer. Bob was able to give me a bit more information on exactly why this is the case. 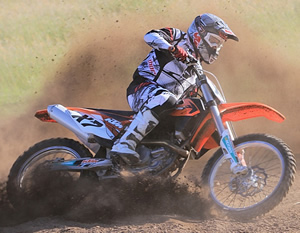 He said that engines in 450cc endruo/MX bikes are designed to cope with slippage. By that he means the engine is happier revving hard with the back tyre sliding and churning up the dirt, that’s why you see them stay together in desert races and the like. Riding them on tar where there is no slippage under normal riding is harder on the engine because the torque is transferred directly into the engine parts, rather than finding an outlet if the back wheel is spinning. Makes sense to me.

In 2009 I built a 250cc road racer out of a Yamaha YZ250F, with motard wheels on it, GP race body work and the like. We did about six race meetings on it plus practice days, and the bike never missed a beat.
The bike was standard except for some tuning with a Power Commander and the exhaust, but many of the other engines in this class were highly modified and faster, and much more prone to blowing up as it turned out.

I guess these types of engines are getting more towards the stressed end of development rather than understressed, which is why they are so fast straight out of the box. We never got that much more horsepower out of the little YZ250F with our mods but at least it was ultra reliable. At the end of the season it got new rings and the valve clearances checked and it was right to go.

At the end of the day if you want all that extra performance a modern off-road bike gives you then you must accept the fact it requires more frequent maintenance.

I GUESS I’ve known most of my life that I have the tinkerer bug inside me. Ever since I was in my teens I’ve struggled to leave mechanical things alone. […]