The flick of movement was imperceptible and I reached out to grab the fob mid-flight.

Your mission, should you choose to accept it, the boss was saying, is to take this beast for a ride over the holiday break.

And here I was stupidly thinking we’ve had a great year and the boss has lashed out on an expensive Christmas prezzie for me – no such luck.

And that was my introduction to the 2016 Harley-Davidson Softail Slim S, in the all new military-inspired Olive Gold Denim.

First things first. Check out the styling touches. Just about everything is blacked-out – the engine cases, forks, exhaust, frame, airbox, footboards, brake levers, mirrors – even the headlight ring has gone to the dark side.

There are hardly any shiny bits – but they all stand out. Look at the engine fins, oil lines, the chrome spokes, fuel and oil caps, the control arms and the ring around the speedo.

Every little piece of chrome has its place. Looking at these minimalist details on the Softail Slim S is like watching Eric Clapton play guitar, it looks like not much is happening on the surface, but boy have you just been sucked in. Layla, you got me on my knees Layla.

Your average sized, six-foot, 85kg bronzed Aussie is going to find the footboard to seat position a bit awkward because the low-slung solo seat tells you where to sit. If it doesn’t feel right, moving your butt will only make it worse.

Despite its military inspired theme, it’s not gonna drop and give you twenty just to spite you. It’s a flannel wearing, Bruce Springsteen listening, middle finger raising piece of American-made iron.

Having said that, not everyone who rides one of these babies is a big boofy solid person.

At just over five foot and under 70kg I definitely do not fit into that body mould.

So my impression of the seat is a far cry from that of my colleagues. By no means am I suggesting that my colleague Ryan has a fat arse. No, no, no, that wouldn’t be polite. But I loved the sitting position and the solo seat. It was snug and comfortable and that was after a nice long ride in the countryside, but more on that later.

It’s not until further admiration of the air-cooled 45° V-Twin engine, you find out it’s not all bar fights, knuckledusters and court-martials. The Softail Slim S features an air-cooled, high output 110-cubic inch engine (1801cc) which Harley designers have named the ‘Screamin’ Eagle Twin Cam 110b’. Screamin’ Eagle is a more appropriate name for a sex position than an engine, but it’s bigger and more powerful than its 103-cubic inch (1690cc) counterpart. They say motion is more important than size, well guess what? The new Softail Slim S has both. Way to blur the lines H-D.

Both engines rely on counterbalancing technology first used in the Twin Cam 88b engine developed for the Softail released over 15 years ago and has continued all the way into today’s Softail range. By using counterbalancing shafts, the engine can be mounted to the frame without the need for rubber mounts Harley-Davidson use in the Dyna and Touring ranges. Counterbalanced engines smooth out vibrations across the rev range but leave you with a satisfying amount of tingle. You still know you’re riding a H-D and anyone within four city blocks will know it at full noise.

So how did a lightweight like me feel about blatting through the countryside on the big Slim’s 321kg platform?

Bloody good actually. In more than 40 years of motorcycling and 10 years in motorcycle publishing testing a virtual smorgasbord of bikes I have ridden my fair share of Harleys.

With such a low-slung seat the weight of the bike is not really something that comes into the equation. Anytime you need to get your feet planted on the ground, even a vertically challenged soul like myself, is not going to have a problem.

During the Christmas-New Year break my colleague Ryan and I went for a jaunt through the Hunter Valley, ending up at one of my favourite ride haunts, Wollombi pub, because that’s where I go to execute my “pub test.”

Now that’s a venue that attracts riders of all kinds of machinery from all over the place. 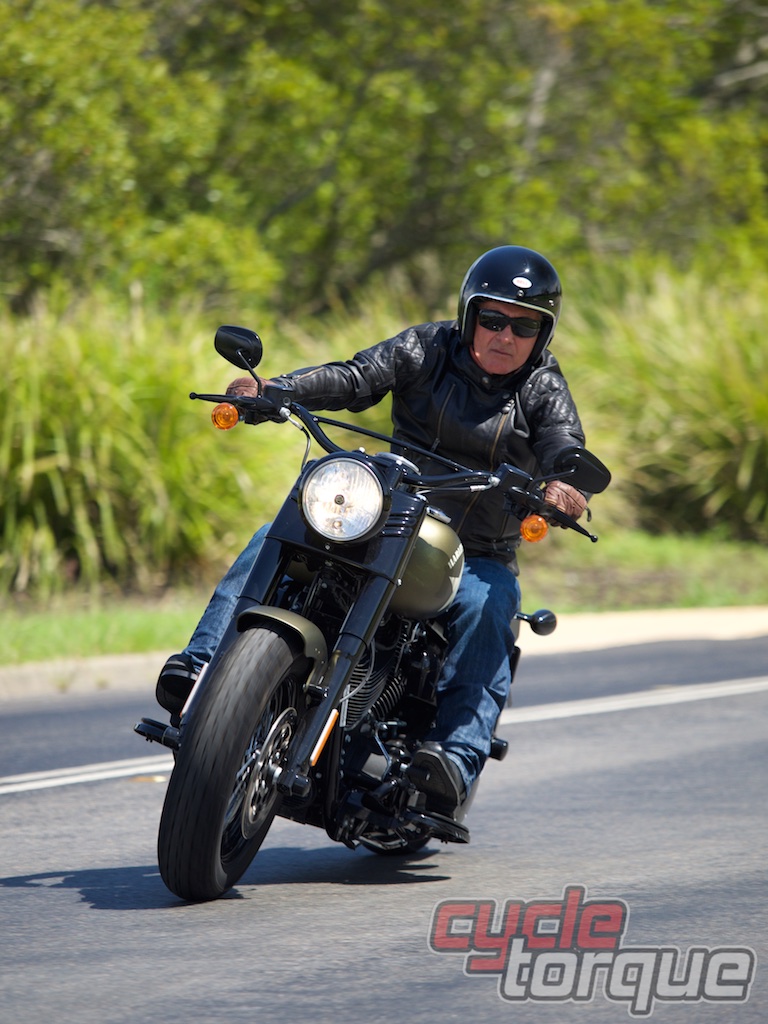 And from my home the route covers everything from motorway links to the utter crap that most Hunter Valley riders recognise as our road system as well as a nice variety of fast, open sweeping bends and nice tight country twisties.

So the first test was how the bike handled the road conditions. The Slim was definitely in its element on the motorway and was also largely untroubled by the Hunter Valley’s country roads.

The suspension is robust enough to tackle pretty well anything. The engine has gobs of low down grunt and quite good acceleration – it’s actually quite a crisp and responsive ride. And all this countered by a set of brakes that you know will pull you up quickly if you need them to. The front brake on the new model deliver a 40 percent reduction in the amount of lever force required at peak braking.

The new electronic throttle control is smooth and adds to the minimalist dimensions of this machine.

I’ve ridden plenty of Harleys with, and without, footboards. I don’t really have a preference either way. My feet are generally too small to use a heel-toe shift the way it was intended, but that doesn’t create any dramas for me.

But that’s not what this style of bike in general is about, is it? Having said that, you will be surprised at how nimbly you can skip through corners and crank around some pretty tight bends without even a hint of scraping.

Arriving at Wollombi the next real test was leaving it parked outside the pub and observing the reactions.

The military colour scheme attracted a lot of comment, all of it good. Some suggesting that the paint scheme even had that old WLA look about it. A few souls recognised the model instantly as the 110cubic inch version, others had to look a little closer.

And speaking of that olde worlde impression the big Slim exudes, I also liked that horseshoe shaped oil tank. In my age group that styling cue speaks of bobbers and panheads and that 60s kind of feel. Very cool.

Back to the pub, as I said earlier, that venue attracts a lot of different bikes and people, and for one machine parked in a line-up alongside a myriad of others to attract the attention that it did was quite informative.

There was no shortage of people looking around for the rider and wanting to ask questions and sound out ride impressions, so it certainly passed my Wollombi Pub test. Now, I wonder if the boss will pay for the beers if I submit the receipts?

Your Slim also comes with the factory installed next-generation security system featuring the hands-free fob that automatically arms and disarms the bike’s electronic security functions as you approach and walk away from it.

But then Harley-Davidson has made an art form out of building new models based on the heritage of their past.

Your new Harley-Davidson Slim is going to set you back $28,995 for the base model.