WE NEED to get a couple of things squared away before we go into the test of the pretty amazing EBR 1190RX.

– Buell no longer exists, Harley-Davidson sold it a few years ago.

– EBR is owned by Eric Buell.

– 49 per cent of EBR is owned by Indian based company Hero Group. 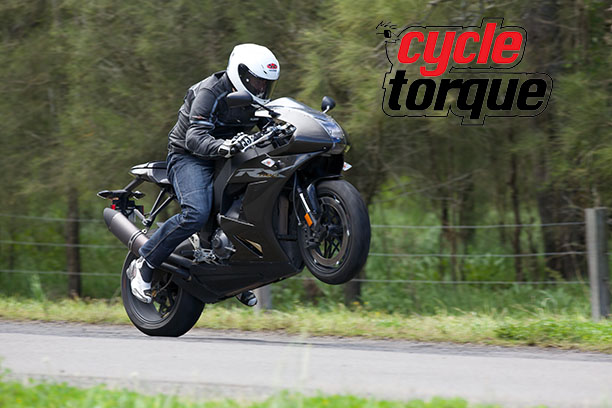 While not being privy to the deal between H-D and Eric Buell when the bust up occurred, Eric must have been given access to parts, technology etc etc for the EBR to be given life in the form it has been.

I guess the daddy of the 1190RX is the 1125R Buell. I actually quite liked the bike, although I think one of the reasons it didn’t sell as well as hoped by Buell was the styling, which to be honest did miss the mark somewhat. It was too bulbous I think, for buyers for whom styling plays a big part in purchase decisions. Whatever I guess, but the fact there’s quite a bit of 1125R DNA in the new EBR 1190RX shows how good that first bike was.

A couple of years ago Eric Buell’s new company Eric Buell Racing, produced the EBR 1190RS, a bike which used an overbored 1125R engine toget 1191cc. While lots of parts were similar to that of the 1125R the bike looked so different it was hard to believe the bike even used the same Rotax designed V-twin engine. It was pretty special and built in very limited numbers, I guess to sample the waters to see if larger scale production was viable.

Luckily it must have been, spawning the 1190RX you see here.

The fact the Hero Group injected $25million probably helped oil the production wheels somewhat, and the resulting machine uses essentially the same engine and fuel-in-frame chassis as the RS.

The first time I’d seen an EBR in the flesh was at this year’s Isle of Man TT. I was able to chat with American TT racer Mark Miller who was riding an EBR 1190 for UK based racing outfit Splitlath. They also ran fellow yank rider Brandon Cretu, an All-American dream team you might say. Now while the dream never really came off, the bikes having a variety of issues, which kept lap times and laps completed down, I was impressed with how the bikes looked. Carbon fibre everywhere, those bikes looked special. The team was pitted in the Parc Ferme area next to the DP Coldplaning/TCR Honda team my son Alex rode for, so I was able to get some sneaky looks at them during the fortnight, plus the not too revealing chats with Miller. They weren’t the fastest but boy did they sound the best. Nothing came close, not even the Aprilia powered Norton, in my opinion. So, I was a fan from afar and keen to see how they stacked up in reality.

The bike is wonderfully small but it’s surprisingly roomy for taller riders. You don’t feel too cramped but then again it will bash you about a bit on rough roads and long distances. But that’s to be expected. If you want the same sort of machine but more comfort you could always buy the naked version of this machine.

It’s packed full of technology too, maybe not as much as some of its competition but still, it has plenty. One thing it doesn’t have is ABS, and there’s no option either. Not sure why, but…

There’s a 21 level traction control, vacuum operated slipper clutch, very comprehensive instrument package which even allows you to access the system diagnostics. Are you a track junkie? If so, the 1190RX’s instruments cater for that too.

Weight is 190kg wet, no doubt helped by the fact the frame is also the fuel tank, and the rear subframe is magnesium too.

Showa BPF Big Piston Forks and the rear Showa shock are fully adjustable, there’s an eight piston single caliper doing the business with a massive single outside rim disc, hubless wheels, 185 horsepower, 137Nm of torque, the list goes on. On paper what’s not to like?

General fit and finish is good but there are a couple of things here and there which could be better, things like the odd bolt or two which looked cheap and the plastic air scoop for the front brake which looked a little flimsy. Overall, minor in the scheme of things though.

It boasts a power output somewhere in the middle of the Ducati 1198R and a Ducati 1199 Panigale, and the power delivery feels somewhere in the middle too, not having the ‘grunty’ feeling of the 1198 engine nor the franticness of the Panigale’s engine. It’s certainly more aimed at top end power than bottom end wheelstanding grunt but don’t worry, you are under no illusions, this thing has some mumbo.

One pretty cool feature the bike has is an automatic chain adjuster, which gives the bike a fearsome sound on deceleration. I initially though it was some sort of gear driven primary drive within the engine, it sounds almost like a supercharger, and intrusive too. But, it’s a very nice intrusive in my opinion. It adds to the aural pleasure of the bike.

I especially liked the traction control, and it’s very easy to dial in as you get to know the layout of the instruments. I never received a class in mode navigation for the EBR but it was easy to work out for myself. I set it at level three or four out of the 21 and I was still able to do power wheelies under hard acceleration and over humps in the road and so on, but I could also feel ‘controlling’ things out of corners when on the gas hard. The traction control goes about its business without being overt, taking the softly softly approach rather than the smash it down and crush your genitalia like some other traction control systems can. Nice.

By this stage I was pretty impressed by the bike but the best was yet to come. Looking at the suspension I was to be honest a little disappointed with the ‘look’. I was expecting some slick and shiny big name European kit but what was fitted were the aforementioned Showa stuff. It wasn’t even a nice colour. Boy was I in for a rude shock. 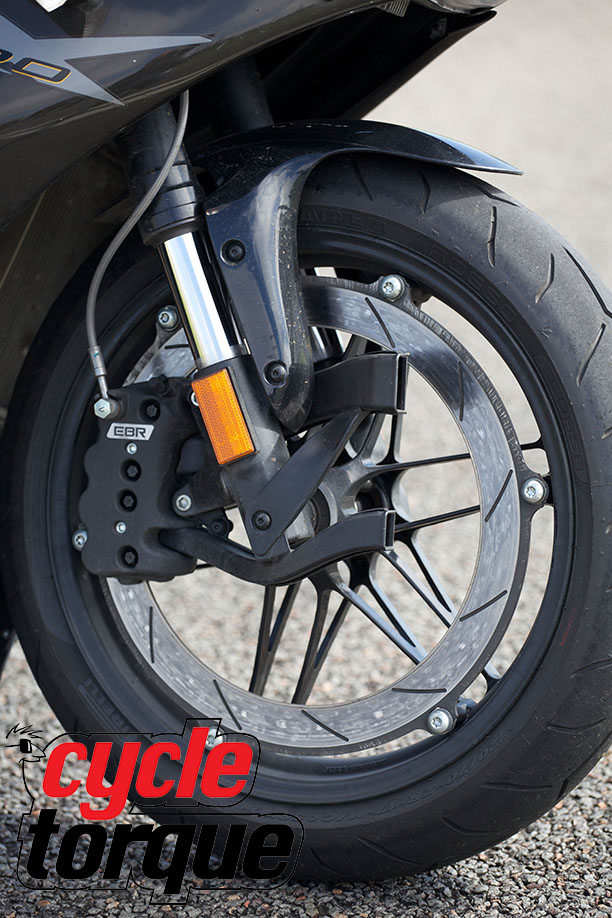 The first part of the road test was on good roads and the suspension worked well, no complaints. As I aimed the EBR 1190RX to the back roads I was expecting to be smacked around a bit but the hits never really came. The suspension was firm, sure, but plush enough on the initial stroke that I was taken aback by how good it was. This gave me enough confidence to really let loose on a section of road which reminds me of some of the IOM TT course from Ginger Hall through to Ramsey. Through the trees, bumpy, jumps, just plain rough. I rode through there as hard as I dared and the bike just lapped it up. To be honest I could not believe it. I thought to myself, ‘I could race this bike as is on the Isle of Man.’ I then managed a very fast run through deserted country roads, and can only say I was in love with the bike’s capabilities.

To add further credence to this, Cycle Torque’s own TT racer Alex Pickett spent a day on the bike too, and came away saying he’d like to race the bike as well, although he’d tweak it here and there first. Well, he is a hell of a lot faster than me.

Alex even liked the distinctive front brake, which has been around on Buells for years. I’ve always thought they were a bit of a gimmick, no better than conventional four-piston calipers. I still think this but at the same time could find no fault with them in power or feel. Different, yes. Better, no.

Is it worth the 27K? Yes, I think it is. There are some fit and finish issues as I said earlier, and this might put off some buyers more interested in bling rather than substance but those who want a ‘rider’s’ bike will overlook those bits, they will know the bike’s ability, and they will want their own American Flyer.

Urban Moto Imports has announced North Star Motorcycles as the new home for EBR and Benelli motorcycles in Brisbane, Queensland. […]