DUCATI has done the difficult, if not the impossible – at its first attempt at building an adventure bike, built a machine which really takes it up to the established brands and models.

Of course it’s not perfect and it won’t be the right choice for everyone, but it does most things better than I expected and is a capable and highly desirable motorcycle. 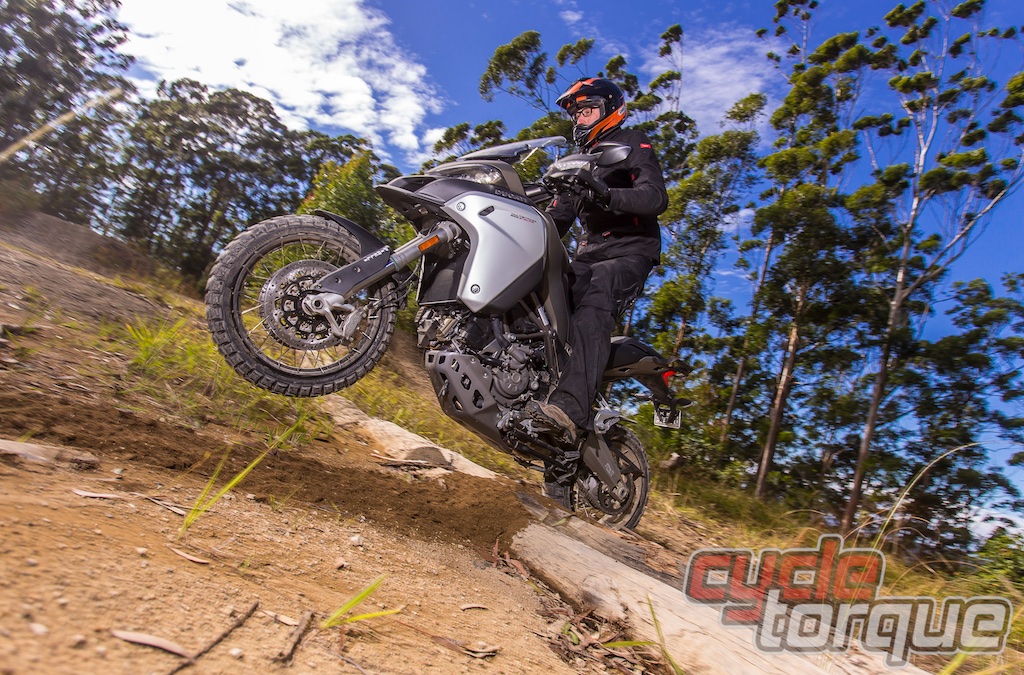 Nearly all the major European brands and some of the Japanese brands now have truly off-road capable adventure bikes. Ducati, once considered a sportsbike manufacturer until it released the incredibly successful Monster range in the early 1990s, is late to the adventure party, but the Italians from Bologna have arrived in style – and while no adventure bike can be described as gorgeous, the Ducati Multistrada 1200 Enduro isn’t as ungainly or angular as some. She might have one of the longest names in motorcycling, but her legs are long, too…

Ducati has gone straight for the open class, using the latest 1200cc DVT motor to power the Enduro, giving the rider 160 ponies to tear up trails, tarmac and tyres.

Those sorts of power figures put the Ducati at the top-end of high performance adventure bikes, too.

Controlling 160hp, especially off-road, isn’t a task to be approached lightly, so Ducati isn’t offering this machine without the latest in its rider aids, so the computer-controlled electronics package is extensive – there’s the expected ABS and traction control, but there’s also a hillstart function, cornering ABS, cornering lights, cruise control and lots, lots more, which I will go into detail when we have fully tested the bike.

At last Ducati has agreed, building the 1200 Enduro.”

Ducati’s Australian distributor asked Adventure Rider magazine’s Tom Foster to plan a route for the press launch, one which would allow the journos to experience the bike in its natural environment, dirt roads.

Tom took us into the hills inland from Coffs Harbour on the NSW North Coast, from fast open trails – and even some winding bitumen – to some fire trails and slightly more challenging terrain.

The Multistrada ate it all up.

My first impression of the bike when I got the wheels rolling was how it felt more like a trail bike than most adventure bikes – steeper steering to give lots of steering lock and low-speed manoeuvrability. Ducati’s added a steering damper so things don’t get ugly at higher speeds.

Ducati had also fitted the optional ‘knobby’ Pirelli Scorpion Rally II tyres for the launch, accepting that a dirt-focussed launch needed more serious off-road rubber. Do we need this high performance rubber? Probably not, the conditions were dry and firm, which if fine for rubber like the standard Pirelli Scorpions, but it sure was nice to know maximum grip was there if it was required. The downside is tyre wear was apparent after just one day of off-road riding, so don’t expect great wear out of these tyres, especially if used on the road in sports mode.

Strada is Italian for street, but in terminology, we would use the word road rather than street. So, multi-road – everything from tracks to the countryside to urban use to dirt roads.

In 2010 Ducati introduced the Multistrada 1200 with four riding modes to cover those four areas: Sport, Touring, Urban and Enduro, and we loved it.

“This time Ducati’s engineers have used some amazing technology to put together this wonderfully powerful and versatile machine to deliver excitement on and off the bitumen,” wrote Cycle Torque tester Ray Macarthur of the first 1200 model, a man who now owns the 2015 DVT Cycle Torque project bike from last year.

However, he also went on to say, “Fitted with 17-inch alloy wheels front and back and comparatively limited ground clearance due to the under-engine mounted exhaust and fitted with Pirelli Scorpion dual sport tyres at high air pressure, its off road capability isn’t up for much more than dirt roads and good fire trails.”

We coped a bit of flack for those comments, with no end of Ducati fans telling us to fit the right tyres and get it dirty, that the bike would cope, but we still stand by what Ray wrote, and nothing really changed in the later models in this regard: the standard Ducati Multistrada is fine on a good dirt road, but cast 17-inch wheels severely limit off-road tyre choices and the bike’s steering geometry and handling characteristics mean it’s not suitable for challenging off-road conditions.

At last Ducati has agreed, building the 1200 Enduro.

Click on the image below to watch the latest episode. This episode features Kawasaki’s versatile small bike, the Versys-X 300, a twin-cylinder LAMS-approved adventure style road bike which is just as at home on a […]

The August 2016 issue is full of Adventure with tests of some hot new Adventure bike and lots, lots, more. Download, read online or grab a printed copy now. […]