IT’S safe to say Yamaha is killing it with its current Massive Torque (MT) line up and the MT-03 is set to continue the trend.

Since-after the release of the MT-09 in 2013, Australia received a slightly restricted, Learner-Approved MT-07 in 2014, and it was so good (almost too good) Yamaha thought, ‘lets sell the higher-output model too’, and its been hotcakes ever since – both MTs topped the list of naked bike sales last year.

Late in 2015, Yamaha announced it would follow in the footsteps of its YZF-R3 machine by producing an entry-level bike to the Massive Torque range for the current model year using the same platform, but giving it more of an upright riding position and also making it look just as good without the fairing. 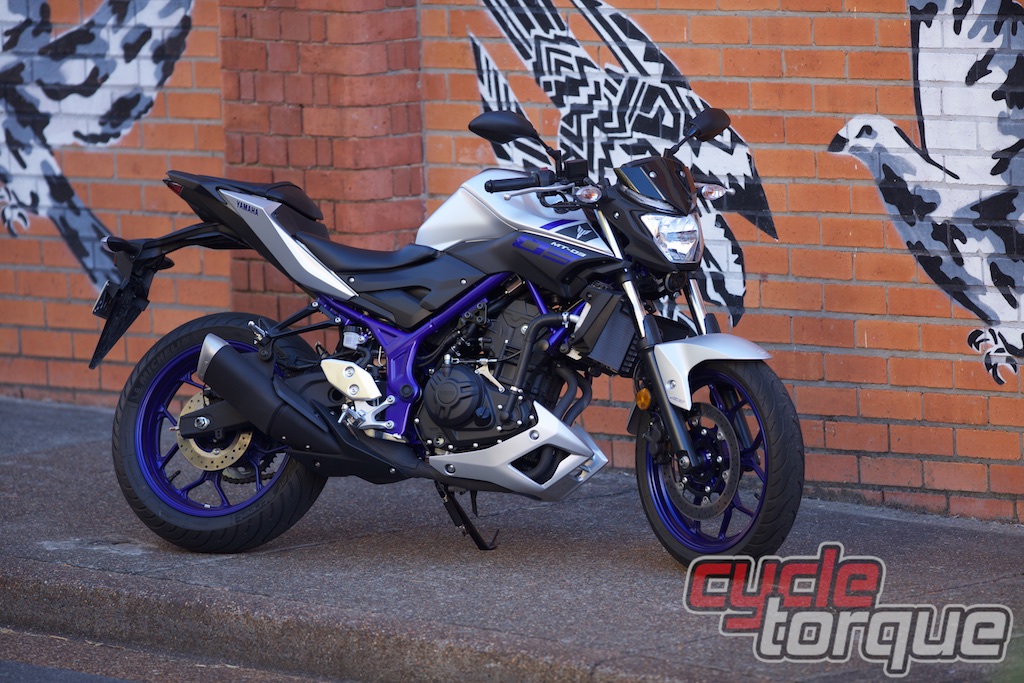 The MT-03 is based on Yamaha’s ‘Doctor Vale Approved’ YZF-R3 and it shares the same engine, frame, suspension and wheels – although being a naked bike, the bike feels more similar to the MT-07 than it does the R3 when throwing a leg over. It is a combination of subtle things – the MT-03’s upright seating position and higher ’bars, along with what seems to be a slightly different shaped tank and the lack of fairing – which are the main contributions to why a fundamentally naked version of the same bike feels so different to sit on.

The specs sheet obviously show the dimensions are very similar as the R3, but surprisingly it is also comparable to its ‘bigger’ MT-07 brother,  which feels similar in size. The MT-03 has a 20mm shorter wheelbase, the seat height is 25mm lower and the overall height is 55mm lower than the MT-07. 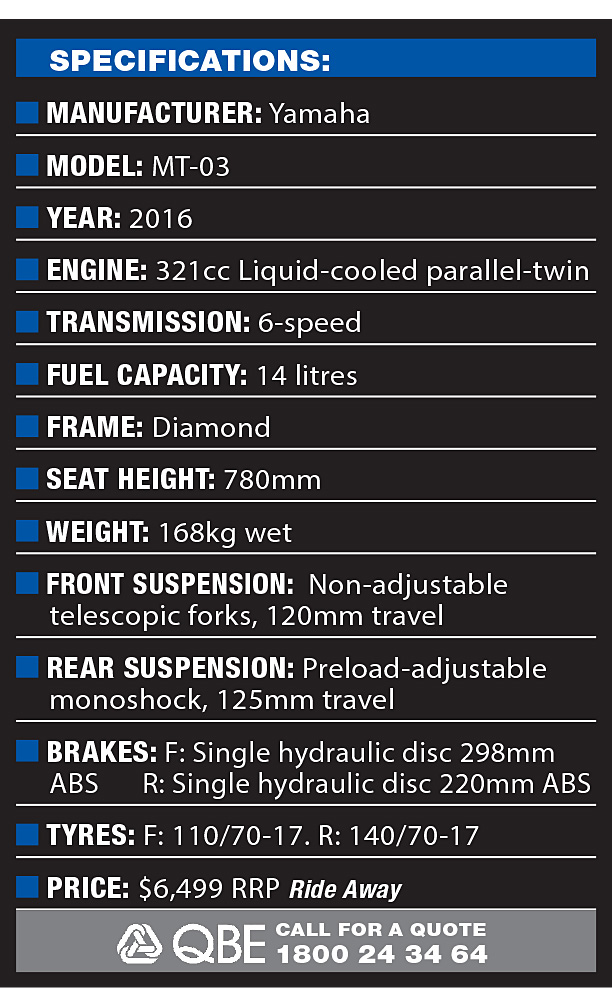 The seating position is quite comfy and well-suited to first-time riders and those returning to the superior, two-wheeled mode of transport.

Riders of all shapes and sizes can call this bike home and it rides great for its intended application – which is to help a new rider get acquainted with things, and learning how fun and rewarding riding a motorcycle can be when you start out with the right one. Being taller, I tend to prefer the seating position of the MT-03 over its sportier brethren. I find it is a bit more practical for the road and I can enjoy myself a bit more – especially in traffic and city situations.

On the backroads, I can ride longer.

The 321cc parallel-twin engine likes to rev, but it is user-friendly and produces enough power to get out in front of traffic when you let your right wrist do enough of the talking. The engine is capable of quite high speeds (Yamaha is racing this engine in a one-make YZF-R3 Cup), well beyond the freeway limit. Things feel quite linear until peak torque is generated at 9,000rpm and power is produced at 10,750rpm, which provides a small surge in performance between. This means the MT-03’s engine performs best when it is kept on the boil to maintain its speed and acceleration, but continually riding the bike in its upper-echelon you will find other things start to find their limit, which I will get to soon.

Hope you enjoy the first episode of our new series. Remember, supporters can watch the show as soon as it’s ready, days before it goes onto TV.