Rapid Solicitors Kawasaki Shane ‘Shakey’ Byrne got his title defence off to a flying start in the opening race of the MCE Insurance British Superbike Championship season at Brands Hatch as he held off Alex Lowes and Josh Brookes to claim victory at his home circuit.

Byrne fired off the pole position into the lead on the opening lap from Brookes, with the Australian rider diving ahead on the Tyco Suzuki on the fifth lap at Paddock Hill Bend. He held the advantage at the front of the field despite the pressure from Byrne, but the defending champion made a repeat move on his rival to reclaim the lead. Brookes tried to defend and take the inside line into Druids but Byrne held the position and in the closing laps upped the ante to edge a gap. 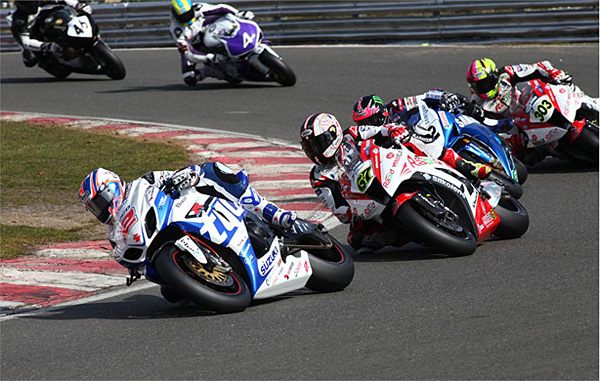 Brookes was then coming under pressure from Lowes and the Samsung Honda rider forced his way ahead with just over 10 laps remaining on the brakes into Paddock Hill Bend. Lowes was able to claim his first podium finish for Samsung Honda with Brookes having to settle for third.

Josh Brookes
“I’m fairly happy with the weekend and I don’t want to use not having track time as an excuse, as no one really has coming into this round. We worked through with a new set-up on suspension and it wasn’t perfect straight away, but by the time we got to race day we were in a good range and the tyre lasted pretty well for us in both races. My GSX-R1000 Superbike was running clean and crisp and I don’t think we could have got much more out of it. Unfortunately it wasn’t enough to secure the results we wanted this weekend, but we will move onto the next round at Thruxton and see how it goes – it’s a long season ahead.”

James Ellison powered the Milwaukee Yamaha to the second MCE Insurance British Superbike Championship race win of the day at Brands Hatch as he held off the challenge from Byrne and Lowes in the closing stages. Samsung Honda’s Ryuichi Kiyonari finished fourth ahead of Josh Brookes in fifth place.