COMING in hot for 2013 is the release of the all new 300cc two-stroke enduro racer from Beta Motorcycles.
The fully ADR approved 300 is readily available to the public and the Italian machine has been gaining strength as player in the offroad enduro market.

We were able to track down an all new 300 and give it a test to see what all the fuss is about. We can tell you that in the bush it handles well and has plenty of power without being a peaky and unfriendly bike to ride. 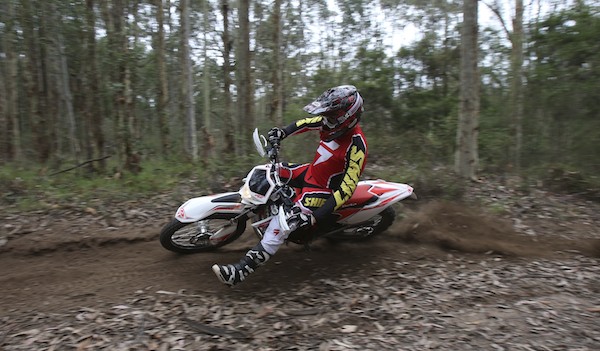 Specifically developed for the offroad enduro market the 300cc two-stroke engine is a legit contender amongst the growing list of big bore two-strokes on the market. Technically speaking, there’s nothing too far out of the ordinary underneath the hood of the Beta, it’s a two stroke 300cc water cooled, case reed intake, carburettored two-stoke engine.
However once you look a bit further into the engine department, you will quickly begin to notice that Beta has taken special care of some of the most important elements that control power output from the specialist enduro machine.

In what are a few strokes of genius, Beta enlisted American aftermarket exhaust giant FMF to develop the 300’s exhaust system, and Beta also handed over the intake duties to another American icon, Moto Tassanari, who designed its world renowned V-Force reed valve system to suit the Beta engine. Both the FMF and V-force reeds make an excellent combination to ensure the Beta 300 comes with plenty of power rig ht from the showroom floor.
Finally, Beta engineers developed an adjustable power valve system which enables the rider to adjust the power of the bike to suit their style or to suit various track conditions.

Comfort and easy to use power are two things that first came to mind when we hit the trails.

The steel chassis design was first taken from its four-stroke brothers of the Beta range, then modified and tweaked to suit the two-stroke engine and handling characteristics.

The frame is a very high quality manufactured piece of work and looks to be a very strong unit. The aluminium swingarm is designed using technology that is new to Beta which allowed the Italian brand to reduce the overall weight, reduce the thickness yet still allow for great rigidity and improved weight distribution. Sachs suspension holds up the Beta 300, with new internal settings and springs customised to suit.

Completely redesigned wheels are also a feature on the Beta, with a focus on weight and strength. Beta engineers designed new hubs laced together with new spokes, nipples and rims and also new disc brakes.
A total weight reduction of 1.5kg was gained in the new design as well and improved strength and rigidity.