After 799 laps, over 3500km of racing, 900 litres of fuel, 30 pit stops and an average speed of over 146km per hour Broc and the Yamaha Racing Austria Team (YART) finished on the podium in 2nd position behind the full factory effort from Kawasaki.

The first time at the Bol D’Or for Broc, accompanied by double world endurance champion Igor Jerman and last minute replacement Sheridan Morais, the team qualified in 9th position. Broc started the race with the famous dash across the track to leave the grid with a big handful of throttle.
After 6 hours and 161 laps Broc and YART were in 6th place behind the BMW and Honda TT LegendsTeam. By 12 hours Broc and the team had completed 395 laps and were up to 3rd having passed the Honda TT Legends team and BMW had gone missing. After a long night with temperatures dropping to only 5 degrees centigrade Broc was 598 laps in and up to 3rd position behind the Yamaha GMT team.
The last few hours saw a huge battle with Suzuki who were in 4th place. Broc rode his usual 50 minute session but as the fastest rider in the team his services were called upon for another session to keep the Suzuki behind.

Great efforts by Igor and Sheridan consolidated the position at 2.5 laps ahead. This saw a change in rider order meaning Broc was again on the bike for the final stage of the race and crossed the finish line to take 2nd place. A great start to Broc’s world endurance career which will go to Suzuka, Oschersleben and onto Le Mans in September for the final 24 hours race of the year.

Australian sensation Darcy Ward admits he was pleased to get Bydgoszcz behind him, despite storming up to second in the World Championship last night.

The 20-year-old finished joint top of the heat scorechart along with local legend Tomasz Gollob and British hotshot Tai Woffinden on a ZKS Polonia Stadium track Ward admits isn’t one of his favourites.

Eventual Motorsportwash.com European SGP winner Emil Sayfutdinov and the flying Woffinden just had the legs on Ward in a fiercely contested semi-final.

But the Poole No.1 still banked a stunning 13 points to add to the 12 he accrued in Auckland on March 23, putting him just six behind World Championship leader Tomasz Gollob.

The Queenslander admits he is still learning in his debut season on the world stage, but he would love to reach his first final since he bagged third spot on his SGP bow as a wild card at Torun in August 2011.

He said: “I just couldn’t quite get there in the semi. I’m not too bummed. For me to get to the semis here is really good.  I was still struggling for a setup in that race. Emil and Tai were just too quick.

“I just knew there was nothing I could do. We had some good battles out there and some tough moves. But that’s racing and I look forward to the next one.

“Bydgoszcz is not my favourite track, so it was good to get this one out of the way. I think I only made one gate all night, so 13 points is pretty good. I thought it was a great meeting.

“We’ve got some Grand Prix rounds coming up on tracks I’ve never been to before. It’s going to be interesting, it’s going to be hard, but that’s what we’re here for.

“It’s my first year and I haven’t experienced a lot. Two semis from two meetings – that’s where I want to be, but making the final is another goal. We’ll see what I can do in Gothenburg.” 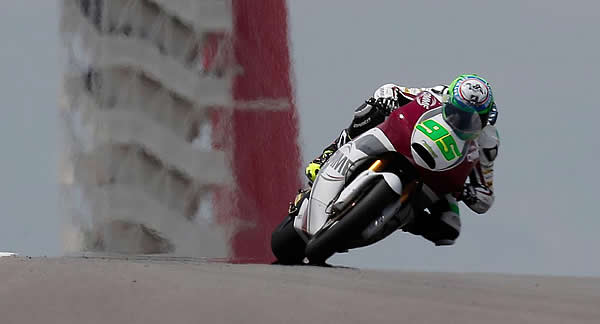 QMMF Racing Team rider Anthony West scored his first top result of the season, storming to seventh place at the Grand Prix of the Americas.

Tenth after the opening lap, the 31-year-old Australian quickly moved up to fifth behind eventual winner Terol, Kallio, Aegerter and Redding, but couldn’t keep his position due to some problems with chattering and a lack of front end grip. He still managed to defend sixth place until the last lap, when Frenchman Johann Zarco took advantage of West’s increasing problems with tyre grip.

Ant’s comments: “My start was good and the first laps went quite okay. I was not amazingly fast, but I felt comfortable where I was. I passed a few people, they fought back, but I passed them again and made a bit of a gap. I really felt like I could have caught the front group once I got passed those guys that were holding me up, but there was enough of a gap that I couldn’t catch them. One problem that I had was front end chatter, the other was that in return for improving the rear tyre grip, we lost some grip in the front and I was losing the front a lot. I was at the limit with how far I could push it and I was borderline to crashing. I still felt I had the speed to catch Redding in the end, because he dropped of a little bit, but my bike wasn’t allowing me to do it. I am also bit upset that Zarco passed me on the last lap. But overall, it is a good result for us, good for the championship to get points and good in terms of the information we got for the continuation of the season. We are getting closer and closer to the front group, we just need to sort a few set-up issues. But the guys are doing a really good job and I am sure we can fix these issues for the next races!”. 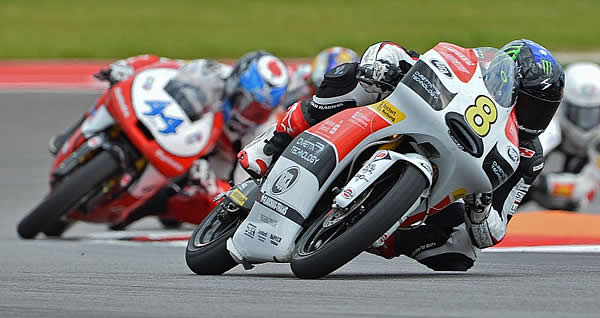 The Moto3 race was stopped and restarted after Jasper Iwema (KTM) crashed heavily and was knocked unconscious.
The Dutch rider was concussed and bruised in the accident, but is otherwise okay.

The five-lap restart was won by Alex Rins who had dominated the original race. He came out on top of a final-corner duel with Luis Salom, who was passed on the run to the line by Maverick Vinales. All three rode KTMs.

Arthur Sissis was riding with an injured wrist but had dropped to seventeenth in the first half of the race, obviously in pain. He went on to finish 12th.

Jack Miller (Caretta Technology – RTG FTR Honda – pictured above) rode a brilliant race to finish sixth and top Honda, just a few tenths off fifth place. The young Australian made up in the corners what he lost on the straights to finish 8.6 seconds behind the winner.

Jack’s comments: “Oliveira came past me on the back straight on the last lap and then I had to close the throttle when someone crashed in front of me. It was a good race, though we were struggling with top speed. The bike handled so well, that’s where I was making up all my time.” 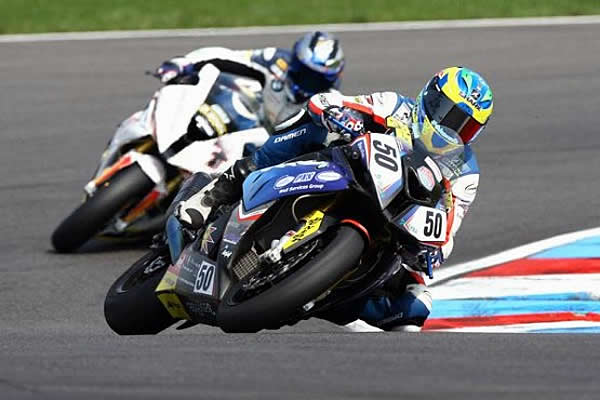 Aussie Damian Cudlin has justified his decision to race in the IDM Superbike round instead of competing in the Bol D’Or 24hr by taking a perfect result over the weekend at Lausitz Ring.

This quote is roughly translated from German – Damian Cudlin (1st / 1st): “That was a perfect weekend. In the first race I saved my tires until the eighth lap, then I went to the limit. It was a big surprise that the Dunlop race tyre functioned better than the qualifier. When I had Matej Smrz overtaken in the second race, I thought that he would counter sometime. I had to dig deep, but came home with the win. “

In eighth overall was Dean Ferris who gave himself a handicap after a crash on Saturday meant he had to take to the start line with the twentieth choice of slots. The Aussie launched well in the first moto but went from fifth to the depths of the top ten with a small slip on the opening lap. He crossed the line in eleventh and then backed up a solid day with sixth place in the second moto.

Dean’s comments: “In the first moto it was unfortunate I crashed but all day, all weekend, I didn’t really feel comfortable on this circuit. It is obviously not my favourite. We went better in the second one considering I got a really bad start. I clicked away the laps and caught up. I’m disappointed I couldn’t run with the leaders but the bike was fast…I got more points than I did last weekend in Italy but oddly I feel more satisfied with last Sunday! All-in-all I’m healthy now so at least I can go home and practice!”

Got any Aussies you want us to follow? Let us know

THE final Phillip Island Grand Prix for Casey Stoner was always going to be interesting, with anticipation building from the time the Australian announced his forthcoming retirement months earlier. […]

Maverick Vinales claimed victory and Moto 3 World Championship at the Valencia Grand Prix on Sunday ahead of Jonas Folger and Alex Rins. […]