NORTON’s Isle of Man TT Aussie duo, David Johnson and Josh Brookes both finished inside the top-10 in both the Superbike and Senior TT races, June 4-9.

Suzuki’s Michael Dunlop has won a shortened Senior TT after the race was red-flagged due to an incident involving Ian Hutchinson at the 27th Milestone.

The Tyco BMW rider suffered a fractured femur and had to be taken to hosptal by helicopter.

The Senior had a lot to live up to and was off to a cracking start with just under two tenths separating Hickman and Hutchinson, with Harrison just over a second behind in third.

Hutchy’s crash on the second lap meant the race had to be restarted.

From there it was Dunlop who lead from go to whoa, with one and a half seconds on Bruce Anstey (Padgett’s Honda) after one lap.

Dunlop increased his lead to nearly 10 seconds coming into the pits with Hickman in second and Harrison in third.

Josh Brookes had moved from 12th to eighth after the first lap, then to seventh by the time he got to the pitstop.

The Aussie Norton team duked it out until the finish with Brookes, who lapped at 130.883mph fourth time around edging out Johnson.

This year’s TT racing has been interesting to say the least, with the weather limiting the amount of practice.

After the Superbike race, Johnson said on Twitter, “Six laps practice on the Norton SG6 and straight into the race.

“Finished seventh! Mega-happy with that!

Finally have some data!”

After a two-year’s away from the Isle, Brookes said he “had the most fun of the people who didn’t make the podium.”

The first of the drawcard races was described as a thriller – during the last lap Hickman reduced the gap to less than two seconds, but Hutchinson’s final run over the Mountain on the Tyco BMW saw him edge clear from Hickman, claiming his maiden TT podium.

There were a few lead changes throughout the six-lap race.

James Hillier (JG Speedfit Kawasaki) led at Glen Helen on the opening lap by 0.8s from Harrison with Hutchinson and Michael Dunlop tied for third but on the run to Ramsey Hairpin, Harrison was 1.3s quicker to turn his deficit into a lead of 0.5s.

Dunlop was now in third, 0.7s behind Hillier, with Hutchinson, Hickman and Conor Cummins completing the top six.

The returning crowd favourite Guy Martin on the Honda Racing machine was out having crashed, fortunately without injury, at Doran’s Bend.

Martin did not take part in the Senior TT.

Norton was awarded the Motul team award for technical excellence at the 2017 Isle of Man TT Races fuelled by Monster Energy. 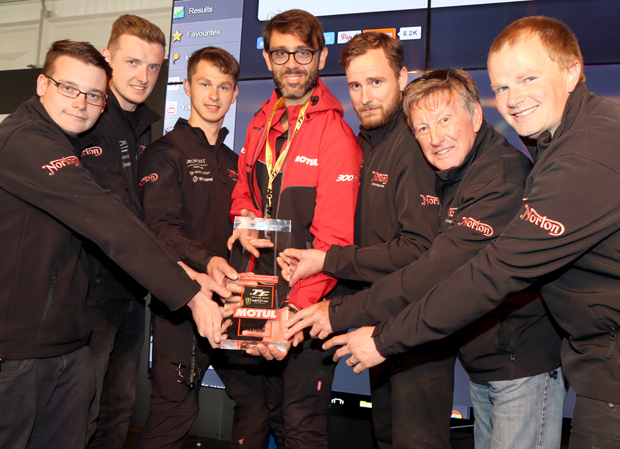 The award, which was created by Motul, is decided by the TT Race Management Team, which includes Clerk of the Course Gary Thompson, Rider Liaison Officers Richard Quayle and John Barton and TT Business Development Manager Paul Phillips from the Isle of Man Government Department of Economic Development Motorsport team.

The award was given in recognition of Norton Motorcycles being the only team to have achieved two top ten finishers in both the RST Superbike and PokerStars Senior TT Races.

Brookes also lifted the fastest Mountain Course lap by a Norton to 130.883 with Johnson also adding another 130mph lap to his record during the PokerStars Senior TT.

This 46-minute feature produced by Adam Riemann for KTM Australia is a real treat for any adventure rider. […]