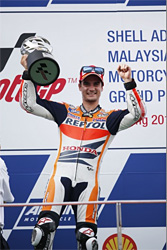 Pedrosa – who also won here last year – finished the race 2.7 seconds ahead of Marquez to record his third victory of the season where he sits just 11 points behind Lorenzo. Without the Aragon crash – which wasn’t his fault – he would still be very much in contention for the World Championship.

Dani Pedrosa: “I am very happy with this win, as it is very special. My level of riding today was very good and the victory comes after a difficult week in which I was laid up in bed and could hardly move. To come here and win is fantastic, so thanks to all my team! It is a pity about what happened in Aragon, because we had the pace and the same chance of the win as we did here. However, we can’t keep looking back; we need to continue on and try to carry our form into the final races.”

Starting from the second row of the grid, Pedrosa grabbed the lead from Lorenzo on lap five and was soon clear of the battle that raged behind him, with Lorenzo and pole-sitter Marquez swapping positions time and again before half distance.

At one point the Yamaha rider made contact with Marquez – who had set a new lap record on lap two – but their fight continued unabated until Marquez went inside his rival at Turn 14 on the ninth lap.

From that moment on, Marquez only had Pedrosa ahead, but he had lost too much time fighting back and forth with Lorenzo and soon realised that chasing his team-mate would entail taking too many risks, knowing full well that all he really needed to do was increase his points advantage over the reigning champ, which he duly did.

The result means all three of the rostrum finishers retain mathematical possibilities of clinching the World Championship, although Marquez is the only rider who could claim the title at Phillip Island next weekend. Should he do so, the 20-year-old Catalan would become the first rookie premier class title winner for 35 years.

Marc Marquez: “These twenty points are very important and I’m really happy with how the race went today. I had a nice, fun battle with Lorenzo, but at the same time I could see that Dani was opening up a gap. When I finally managed to overtake Jorge and make the pass stick, I tried to reduce the distance that Dani had put between us. However, I saw that it was too risky to do so. From that moment on, I decided to focus on keeping Lorenzo at bay, because the goal here was to finish the race ahead of him. We did what we came here to do, so we are very happy!”

Jorge Lorenzo: We were much slower than the others today, especially after three or four laps. I tried to open a gap at the beginning like always but there was +0 on the board after a couple of laps. When Dani passed I tried to stay with him and also then again when Marc passed me. I tried to pass him some more times to make him nervous but it was impossible, he was much stronger today so we couldn’t do much more. To win the championship is almost impossible but I would like to finish second in the championship and win as many races as possible.”

Valentino Rossi: “Today was half and half for me, for sure we improved and made another step, improving the setting of the bike and I was able to be very close to Jorge. It looks like today our competitors had an advantage here; they were able to keep a better rhythm than us. Starting from second I hoped to arrive on the podium but I knew the top three guys were very strong. At the beginning of the race I lost some time as I had a problem with the front brakes.”

Alvaro Bautista: “I made a good start and that allowed me to get away with the front group for a few laps but then I had a moment when I couldn’t get the front brake lever fully on and I ran wide. It took me a couple of laps to get confident with the brakes again and I lost touch. Maybe in the battle with Valentino I overheated the brakes. It was a shame but I fought my way back to Crutchlow and then gritted my teeth to beat him in a fight to the end.”

Bautista now moves up to sixth place in the Riders’ Championship, ahead of LCR Honda MotoGP’s Stefan Bradl who was forced to miss the race because of a broken ankle.

A total of five riders failed to finish, including 2006 World Champion Nicky Hayden who parked his Ducati Team machine on the start/finish straight after suffering technical problems.

With four races to go in 2013, Sepang marked the first event of a triple-header which next weekend takes the MotoGP fraternity to Phillip Island, for the Tissot Australian Grand Prix.

Moto3
Aussie, Jack Miller (Caretta Technology – RTG FTR Honda) rode a heroic Moto3 race, fighting his way into the lead pack to cross the line just one second behind race winner and series leader Luis Salom (KTM). Miller spent the last few laps in the thick of the lead group of six riders and passed two of them on the final lap, but he didn’t quite have the speed to hold them off and so finished the race in sixth spot. It was another impressive display from the teenager who now travels to Phillip Island for his home race.

Jack Miller: “It was good, but a shame about the end, after I’d passed a couple of them on that last lap. It’s been good this weekend. We had the suspension dialled in great – after 18 laps in this heat the bike was still working well, so the team have done a fantastic job. We were sixth but we should be proud because we were only one second off the win – that’s our best-ever gap to the winner. And it’s great to get this result leading into Australia.”

Jack Miller takes second victory of the season in Moto3

The Red Bull Grand Prix of the Americas brought victory in the Moto3 race for Jack Miller, with the Red Bull KTM Ajo rider being joined on the podium by Romano Fenati and Efren Vazquez. […]