Saturday had seen Dani Pedrosa smashing Casey Stoner’s 2008 lap record en route to an impressive pole position for the Repsol Honda Team rider’s 200th Grand Prix weekend. He would ultimately lose his lead on the drag to the first corner, after a scorching start from third on the grid saw the local hero pass pole man Pedrosa almost immediately for the hole shot into turn one.

A classic Lorenzo master class followed with the reigning world champion maintaining a metronome precision over race distance to keep the two following Hondas of Pedrosa and Marc Marquez behind.

Jorge Lorenzo
A perfect day, to be honest I didn’t expect to win, I knew I had some chance but not like in Mugello where I was more convinced we could get the victory. It was really difficult physically as it was the hottest race of the year. I kept pushing 100% all race because any mistake would have been a disaster. I was surprised at the start as I expected to just pass Cal but I passed Dani also. I took profit from it and tried to open the gap but it was not enough to go away, Dani was there and we played some games, I was 0.5 ahead then 0.2; I was going then he was recovering me. Finally because I was tough mentally and never gave up I could open in the last five laps a little gap that was enough to win. The girl who designed my helmet, Anna Vives, is famous in Spain; she is a symbol that people with Down syndrome are capable of a lot more than some people think. I think it was very original and colourful so I was very proud and happy to have her on the podium to share the win with me.”

Two weeks ago, Lorenzo had sealed his second victory of the campaign in Italy. He now becomes the first rider to win three times in 2013, in the process moving to within seven points of championship-leading Pedrosa. This afternoon, the Mallorcan made the most of the battling Hondas to pull out a lead of over one second with four laps to go.

Repsol Honda’s Dani Pedrosa and Marc Marquez  chased Lorenzo throughout, spending most of the 25 laps less than half a second behind the reigning World Champion, who stretched his advantage in the final few laps to win by just 1.7 seconds. Pedrosa’s second successive runner-up result – following wins at Jerez and Le Mans – means he retains the World Championship lead, with a seven-point advantage over Lorenzo.

Dani Pedrosa
“Today was a bit of a strange race. We could not get maximum performance and physically it was very hard, because of the heat of the bike and the tyres. When I tried to open the throttle the bike wobbled in the front and I had to be very careful. We three frontrunners were battling the track conditions today. It was a bit disappointing not to be able to push more, since the differences between us all was minimal. We rode practically the entire race without any overtaking. It was very easy to make a mistake and, in fact, in the closing laps, Marc made one and I had a slide, but in the end we were able to take a very important second place. We expected to do better after yesterday, but we now have an extra twenty points and we continue to lead the standings.”

Marc Marquez
“It was a difficult race. We expected it to be tough, but we never imagined that we would be fighting for the podium with Jorge and Dani and I’m very happy with this result! It gives us confidence after a slightly tricky weekend, as in the end we found the ideal set-up. During the race I learned a lot from riding behind Dani, trying to figure out how to ride a MotoGP bike at this track, and in the end we did quite well. We knew it would be difficult to finish in the top five, but we managed to get on the podium. I can only say I’m thrilled with the result. Now we look to Assen and we’ll see if we can improve anything for that race during the test at Aragon.” 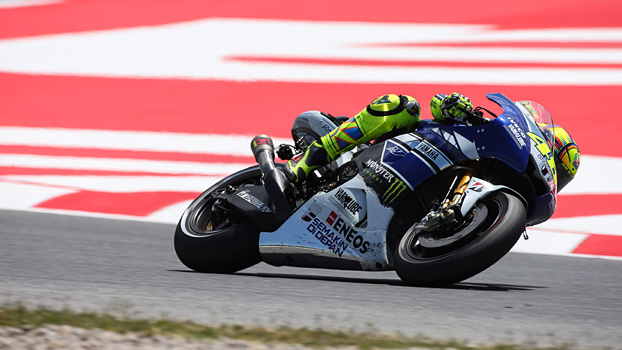 Valentino Rossi (pictured above) rode a lonely race to fourth position while as many as eight riders retired, including Cal Crutchlow who crashed out on the sixth lap.

Valentino Rossi
We wanted to try and arrive on the podium, but anyway it was quite a good race. Race by race, apart form the unlucky times, especially like Mugello, we grow up and I am able to ride the bike in a better way. We still have some challenges, especially in the first part of the race where I still don’t have the right setting to push to the maximum. After some laps my pace was not so bad and we were not so far from the top guys. We did a good job and we will now go for two days of testing where we will try to improve further. We don’t give up, we will make another step and we will not be so far from the front.”

As Yamaha Factory Racing’s Lorenzo moved to seventh in the all-time rankings for premier class race wins, with his 26th victory putting him one ahead of 1993 World Champion Kevin Schwantz, Pedrosa was forced to fight a rear-guard action even though Marquez had almost removed himself from the race on the penultimate lap.

Heading into Turn 4 on the 24th of the 25 tours, Marquez suffered a significant scare and came perilously close to losing the front end of his bike. He would go on to reduce a six-tenth of a second margin to finish the race just six hundredths behind Pedrosa, although the key to his day had been a strong getaway from sixth on the grid.

The leading CRT rider for the sixth time in as many Grands Prix this season, Power Electronics Aspar’s Aleix Espargaro finished eighth for the second race in a row, while GO&FUN Honda Gresini’s Alvaro Bautista was upset to have crashed on the opening lap following a near-miss with Valentino Rossi’s Yamaha. Also in the gravel at the La Caixa corner were PBM’s Michael Laverty and Ignite Pramac Racing’s Michele Pirro, although the Italian went on to finish tenth.

The high attrition allowed an assortment of riders to enjoy their best races of the season, including Australian newcomer Bryan Staring (pictured below) who finished 14th to score the first points for the Gresini CRT bike. Scoring on his debut was Avintia Blusens’ Javier del Amor, substituting for Hiroshi Aoyama who had injured a finger on Saturday. 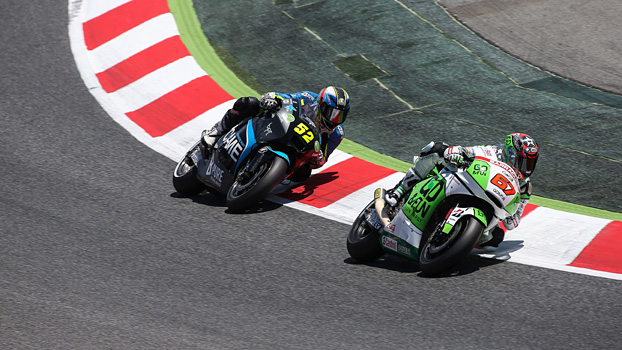 Brian Staring
“I scored my first World Championship points today but I am still not particularly happy because I would have liked to do it more on the front foot. It wasn’t an easy race because of the conditions and I was able to improve my pace from qualifying so that’s good but I’m still not happy to be honest.”

Six races into the 2013 MotoGP campaign, Dani Pedrosa leads Jorge Lorenzo by the further reduced margin of seven points. In the Constructors’ Championship, Yamaha has moved to within four points of the leading Honda. The battle will continue in The Netherlands, with the historic Iveco TT Assen on Saturday 29th June.

MOTO2
Pol Espargaro has claimed his second victory of the Moto2 campaign, after fending off teammate Esteve Rabat. In third place, Tom Luthi returned to the podium for the first time since Brno 2012.

It was a race of high attrition in which 11 of the 34 starters failed to make the finish on another warm afternoon in Catalunya. On Saturday, Espargaro had taken pole position and was only headed this afternoon when he allowed Tuenti HP 40 teammate Rabat through, only to retake the lead on Lap 17. Rabat mounted a strong attack on the final lap and would be less than one tenth of a second behind at the finish line.

Several riders ran into trouble, not least Blusens Avintia’s Toni Elias who was caught up in drama at the first corner. It was also a disappointing conclusion for reigning Moto3™ World Champion Sandro Cortese (Dynavolt Intact GP), who pitted after going off at Turn 10, and Jordi Torres who crashed his Aspar Team Moto2 bike out of the race in the middle of the first chicane on the 18th of the 23 laps.

MOTO3 – Top 10 finish for Miller and Sissis
Luis Salom has won Moto3 to take the lead in the World Championship. The Red Bull KTM Ajo rider carried out a well-judged race, saving tyres before hitting the front in the closing stages. Alex Rins and Maverick Viñales completed the podium as the top five places were filled by Spaniards.

The race featured several leaders early on, including Estrella Galicia duo Rins and Alex Marquez as well as Team Calvo’s Viñales, although Salom had already provided the clues by sealing pole position on Saturday. Heading into the final two laps, Marquez and Mahindra Racing’s returning Efren Vazquez fell back which ensured a three-rider fight at the front; despite the best efforts of Viñales in the stadium section at the end of the lap, Salom had pulled out enough of a cushion on the back straight.

Behind what was the leading group for much of the afternoon, Miguel Oliveira rode the second Mahindra to sixth place as Jack Miller (Caretta Technology – RTG) finished seventh after running as high as third. The top ten was completed by Alexis Masbou (Ongetta-Rivacold) and Salom’s Red Bull KTM Ajo teammates Zulfahmi Khairuddin and Arthur Sissis. In 15th place, San Carlo Team Italia’s Romano Fenati finished in the points for the third time this year.

If you’re gonna have a tilt at setting a land speed record, take a filmmaker with you – American Honda Dealer Al Lamb did exactly that and Zach Seottewongse’s resulting 15-minute story of the attempt […]