Reigning Australian Superbike champion Wayne Maxwell (above) has been thrown a racing lifeline by Honda, and will mount his first attack of the new season against established rivals Glenn Allerton, Josh Hook and Jamie Stauffer in the opening round of the inaugural Phillip Island Championship at Phillip Island next weekend, February 21-23.

The Phillip Island Grand Prix Circuit has joined forces with the Australian Grand Prix Corporation to launch the championship. Catering for national-level superbike, prostock and supersport classes, the title chase will kick off at next weekend’s world superbike round and conclude at the MotoGP round from October 17-19 – a total of four races for each category across the two meetings. 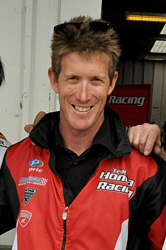 For Maxwell, he’s just relieved to be on the grid after the recent demise of his 2013 employer, Team Suzuki, because of a lack of sponsorship, which left him precious time to scramble a new deal for 2014.

He has now reunited with the marque where he has spent most of his professional career and arrives at the island today with Team Honda Racing to conduct a two day test on the new CBR1000 RR SP.

“I’m really happy to have found a home at Honda again, so I’d like to thank them as well as my other sponsors Motul and Pirelli,” said Maxwell, who has been a dominant force at Phillip Island in recent years.

“There has been plenty of uncertainty about my future but it’s all settling down, and as well as the Phillip Island Championship I’ll also be competing in the 2014 Australasian Superbike Championship.”

Maxwell’s Honda CBR1000RR will be prepared by Motologic, the Melbourne-based tuning house which also runs the official Team Honda outfit of Hook and Stauffer. 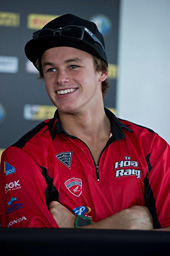 The superbike field at Phillip Island will combine with 15 Prostock riders to produce a 35-strong grid to compete in the two 12-lap races, while Australian Supersport competitors will contest two 10-lap battles.

For Hook (pictured right), Stauffer and Allerton (BMW), the Phillip Island Championship will mark a welcome return to the national support fold after competing as wildcards in the international classes at Phillip Island in 2013.

Hook is still searching for his maiden superbike victory at the circuit and is looking forward to debuting the new souped-up CB R1000RR SP at Phillip Island .

“Every time I get on the Honda superbike I find something extra and take another step forward, which is the most pleasing thing for me,” said Hook.

“And the new SP looks like an unreal bike, so that’s going to make things even more interesting. I should have a great battle with Jamie, Wayne and Glenn, but it doesn’t really matter who I’m up against – I just love pumping out the laps at Phillip Island, which is my favourite track in the world. I’m stoked that Honda has committed to the Phillip Island Championship.”

Walters is on a serious career trajectory, and gave riders like Broc Parkes and Kevin Curtain a torrid time in the 2013 FX-Superbike Championship.

In superport, the field is a cracker, with six of the top eight in the 2013 Australian title –Daniel Falzon, Aaron Morris, Michael Blair, Callum Spriggs, Aiden Wagner and Mason Coote – joined by Matt Davies, who was a world supersport rider in 2013. The winner could come down to a lottery, but Yamaha’s in the box seat for its own accolades: all the riders are on the Japanese equipment.

Team Suzuki’s Wayne Maxwell will start from pole position for the QBE Australian Superbike Championship races, after setting a new best lap of 1.06.997 in today’s Superpole at Hidden Valley Raceway. […]