Marc Marquez has made it an unbelievable nine wins from nine races this season with a perfect weekend in Germany, clinching pole position, fastest race lap (lap 21/30 1’22.037) and the race victory ahead of team-mate Dani Pedrosa and Jorge Lorenzo.

A crowd of almost 90,000 saw the start of the eni Motorrad Grand Prix Deutschland MotoGP contest which was disrupted by pre-race rain, with race winner Marquez, Pedrosa and Lorenzo all getting away from pit lane. 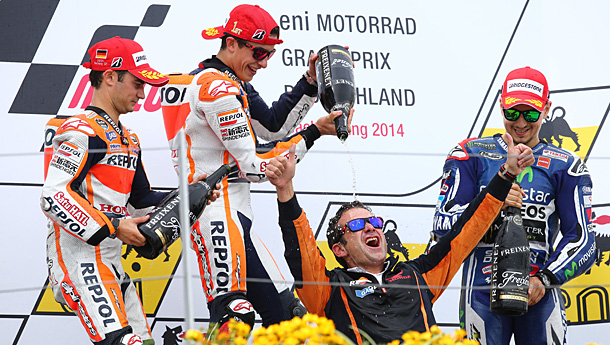 From third on the grid Stefan Bradl (LCR Honda MotoGP) started alone towards the front on slick tyres and led the early laps after rain in the race build up caused confusion as to which tyres would work best. With the track drying quickly 14 of the 23 riders changed from wet set-up to dry after the final Warm Up lap, meaning they had to start from pit lane.

Bradl’s bike set-up appeared to let him down with slicks hurriedly fitted to a previously wet set-up bike on the grid. He eventually dropped to 16th place in his home race.

Marquez (Repsol Honda Team) was in imperious form once again to make it nine wins from nine, cutting through the pack in a chaotic first few laps and eventually pulling clear at the front with team-mate Pedrosa, who would ultimately cross the line 1.5s behind him. A further nine seconds back Lorenzo (Movistar Yamaha MotoGP) made a welcome return to the podium before the summer break.

Marc Marquez: “Before going out on track I thought it would be a similar race to Assen, but in the end the surface dried out very quickly. I saw on the grid that Bradl had gone with the slick tyre option and I really had my doubts, because the area around the back of the track was still wet. I finally decided to see what Dani and Valentino were going to do, as they are my main rivals in the Championship and if you get it wrong in these races, you can lose a lot of points. That’s why I decided to copy their strategy. The race was nice, especially the first part which was when I enjoyed it the most!”

Dani Pedrosa: The start of the race today was a bit like Assen. Rainfall before the race meant that half the track was wet, and in the time we took to set up on the grid and do the warm up lap it had been drying out; there was only one wet corner, but it was very wet. We had to change to the bike with slicks and almost all of the riders started from pit lane. We couldn’t fight for victory but we were very close, Marc was very fast today, too. Now we have the test at Brno and will try to find a few tenths somewhere, so that we can go faster and be even stronger at Indy.”

Jorge lorenzo: “I’m satisfied because finally we got another podium. At the last two races I couldn’t do it for some reason. In the practice sessions I went fast on both tracks. I hoped to race in a dry race but in the last moment it started spitting so we went with wet tyres and after that we went into the pitlane for slicks. When I started the race and touched the front carbon brake it wasn’t warm enough to work, so to not touch the other riders I had to go onto the track. I let them pass again because it’s not allowed to make progress this way. The leaders were very strong at the beginning with the intermediate track. They had a gap of six, seven or eight seconds. I just needed one or two tenths to stay with them. Anyway, I had a good race and I did my best.”

A difficult weekend for Bradley Smith (Monster Yamaha Tech3) ended with a 19th place finish after an early crash – his fifth of the visit to Germany. Meanwhile on lap 19 Michael Laverty (Paul Bird Motorsport) crashed out, fortunately avoiding any serious injury.

Jack Miller, Red Bull KTM AJO factory rider was in determined form on the Sachsenring circuit on Sunday to take victory in Moto3 GP with a pole to finish win. South African Brad Binder challenged the Australian rider hard throughout the second half of the race and went on to finish second.

Miller got away cleanly from the start, was first into the first corner and settled down to hold the lead throughout the 27-lap race on what is the shortest circuit on the World Championship calendar.

Jack Miller: “Brad (Binder) was very strong. From the first lap I could see he was going all out, braking like an animal and getting very close to me. It was very stressful and I had to push hard on the last two laps to try to pass me. It was very important to get these 25 points. Now we have to ride intelligently at the next few tracks.”

Miller eventually crossed the finish line 0.180s ahead of Binder, as Miller extended his championship lead to 19 points and Binder earned a first ever podium. Lightweight class veteran Masbou was third for just the second podium of his decade long career.

A mistake by Marquez late in the race meant he could only eventually finish fourth, whilst a much improved showing from Kent took him to fifth.

Substitute Gabriel Rodrigo (Avant Tecno Husqvarna Ajo) crashed on the first lap and was able to remount, with Livio Loi (Marc VDS Racing Team) doing brilliantly to stay upright as Rodrigo touched his bike – only for Loi to later retire due to a mechanical fault.

Enea Bastianini (Junior Team Go&FUN Moto3) went down early but was able to remount and score a point in 15th.

Towards the end of the race Miguel Oliveira (Mahindra Racing) and Karel Hanika (Red Bull KTM Ajo) both went down together as Hanika lost the front, with Niccolo Antonelli (Junior Team GO&FUN) also crashing in the final stages.