The rare one-day event showcases racers from all areas of two-wheeled motorcycle competitions from Australia and the world: coming together for a full day of racing on one of the few oil-circuit flat tracks in Australia.

“There are very few brands, American brands in particular, Indian and of course Harley-Davidson are the only two that you can really name that have credibility.

“Anywhere you go in the world you can hear someone say ‘I love owning an Indian’ or ‘I want to own an Indian’.

“It has become an aspirational brand all over the world,” Mr Harvey said.

Mr Harvey believes good representation at events like The Troy Bayliss Classic is important for Indian: getting people to know who these guys are and what Indian bring to the table and the sponsorship is a good match.

Indian Motorcycle’s support is not necessarily about Ricky winning the races but about representing the dealership and brand.

“Ricky brings with him a wealth of experience in both Australian and International Road Racing whilst Kevin’s skills and expertise were developed from a long career in Australian road racing and speedway racing.

“But really it is a nice position for the store and for the customers to know there are real high quality people working in the dealership.

“To be invited amongst that group of riders is an honour in and shows the esteem that Ricky is held in” Harvey said.

The bikes in the U.S aren’t available to the public, they’re one off specials at the moment.

Also racing at The Motul Pirelli Troy Bayliss Classic will be Jared Mees who will form part of the Official Indian Motorcycle Wrecking Crew in the US this year.

Jared and his teammates will compete in the AMA Pro American Flat Track series riding the purpose-built Indian Scout FTR750. 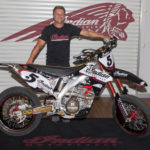 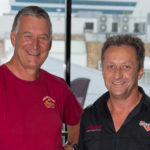 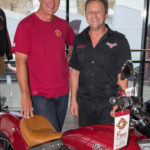 Check out the unveiling of the new Indian motorcycles.

Well doesn’t this thing – the FTR1200 and FTR1200S from Indian – look cool! It’s a cross between the Scout and the flat-track race bike Indian’s been producing for a while, so it’s no real […]