On first sight the Indian Chief Vintage looks like you just stepped back in time with the styling reminding you of yesteryear. The bike is fitted with an array of old style equipment like the front screen, tank mounted speedo, desert tan coloured leather seat and traditional style leather saddlebags also in desert tan. Add to the mix a classic low stance, full covered guards, white wall tyres and lots of chrome and you have all the ingredients which I feel gives the bike the look and the right to the vintage tag. To me this motorcycle is a thing of beauty but it is also a little intimidating due to its sheer size and imposing visage.

The Chief Vintage has an upright riding position with forward mounted brake and shift leavers set above a running board. Start is by keyless fob which is becoming more common on a lot of bikes these days. As mentioned the Speedo is mounted in the tank and includes an LCD display giving you all the relevant information including revs, fuel and gear indicator etc. The bike is also fitted with twin 300mm anti-lock brakes on the front and a single 300mm anti-lock brake on the rear so despite its bulk it has the ability to pull up without hassles. It has single rear shock and twin chrome exhaust which I think adds to the bike’s classic good looks and the bike is also fitted with a quick release front screen and cruise control. 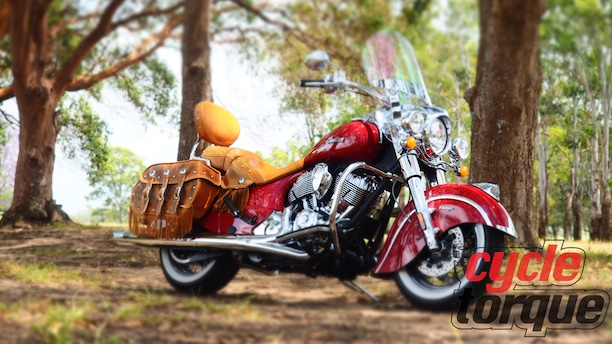 I mentioned earlier how imposing the bike looks just sitting there on the stand, but like many big capacity cruisers with a low seat height, you don’t really notice the weight – in this case 364kg – once you are underway. The Chief Vintage is fitted with a six speed transmission and on changing into first gear you noticed a distinct ‘clunk’, once again a big capacity cruiser ‘trait’ but after that the gear changes were smooth and the bike’s torque allowed you to motor along with very few gear changes required. I found the bike to be well balanced and surprisingly nimble having no issues with clearance even on tighter sections. Don’t get me wrong, I’m not saying you won’t scrape if you are going ridiculously hard but if you ride sensibly it will surprise you just how well the bike can corner. I found the power delivery was more than adequate but this really didn’t surprise me as the motor fitted is what they call the Thunder Stroke 111, which is just over 1800cc and with 139 Nm of torque chiming in at a low 3000 rpm.

During the time I had the Indian Chief Vintage I took it on a variety of different road types and conditions, finding it was more comfortable and handled better than I expected, and more than capable of taking the worst out of the ride. I also had a chance on some of the highway sections to try out the cruise control and found that it worked great being able to hold the selected speed and allowing you to just relax and enjoy cruising along, which in reality is exactly what this bike is designed to do. Overtaking was always a breeze as the engine has more than enough power to hustle along and with the torque on tap I never needed to rev the engine or even to change gears. 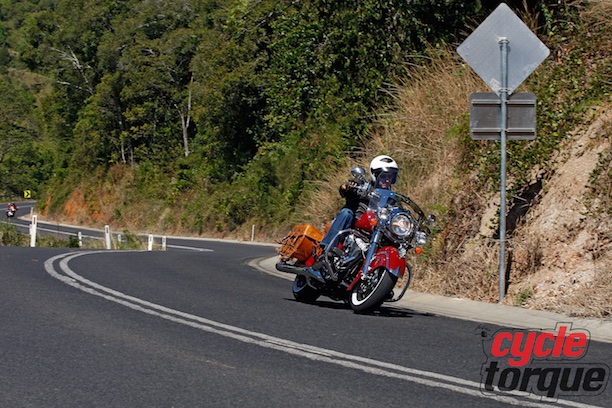 During my time with the bike I really did enjoy every minute I had with it and despite its weight I found it to be a pleasure to ride no matter what the conditions with the suspension able to soak up the rough surfaces and glide over the better ones. The engine’s power delivery was one of the best things about the bike as it had more than enough so you never had to rev it. On the highway the engine’s torque just allows you stay in top gear all the time.

Finally for me it’s the overall look of the motorcycle, which although it is a modern motorcycle its retro styling made me feel like I’d gone back in time or won lotto and been able to purchase one of the originals. This bike is a real tribute to those past Indian motorcycles. This was highlighted to me during our photo shoot when we had an elderly gentleman walk up and compliment me on the great restoration job I had done.

At $31,495 the Indian Chief Vintage does represent a substantial investment but this is a bike most people will cherish for many many years. It will have that effect on you.

The re-born Indian Motorcycle Company is taking win after win in the ever-popular flat track races in the USA. […]