Spaniard Marc Coma has picked up his first stage win of the 2015 Dakar Rally overnight in the tough conditions of Chile’s renowned Atacama Desert.

The 2014 Dakar Rally Champion completed the 458km special section of the stage in just over four-and-a-half hours, clawing two minutes back from overall race leader and fellow countryman Joan Barreda Bort, who leads the race by ten minutes. 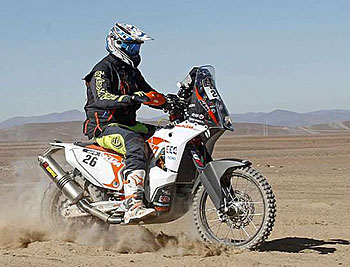 He said, “Today was another really tough stage, we started stage 5 in 19th position and made our way through to 10th which is positive.

“There was a lot of dust today which made it extremely tricky to see stones and the correct tracks, you had to really pay attention all day.

“I’m starting to find my bearings a little better with the road book which is great, it’s all about learning for me.

There’s still the second part of the rally ahead of us which includes to marathon stages.

Coma pushed hard throughout the stage to reduce the gap to Barreda and as the rally approaches the rest day on Saturday, saying it had been another hard day’s riding with the fesh-fesh (fine dust) and plenty of rocks making it difficult to maintain a good rhythm in the first half of the stage.

Coma’s aim was to exert pressure on Barreda but also to ensure the other riders did not close the gap on the front two.

“I am happy about the stage win but the fact is that Joan enjoys a significant advantage and we will try to trim it.

There is still a lot of race left.

The second part (of the rally) is longer with the marathon stages and it will be a fight every day.

We are going in the right direction and we will keep fighting,” he said.

Stage six of the Dakar Rally takes riders from Antofagasta to Iquique over a total distance of 688 km, of which 319 is timed special.

It may be one of the most remote races in the world, but in this year’s Tatts Finke Desert Race, KTM riders can enjoy setup advice, technical services and parts availability as if they were right at their Local Bike Shop (LBS).
[…]

Toby Price is currently sitting in fifth place after the second stage of the Dakar Rally, after travelling west from Villa Carlos Paz to San Juan, Argentina. […]