Hunter Valley desert racer Toby Price achieved his sixth top-five finish of the 2015 Dakar Rally overnight, as the second of the event’s two Marathon two stages began on the 891 kilometre road from Calama to Salta. 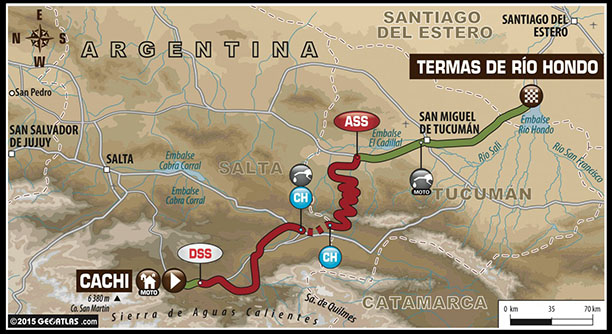 The three-time Finke Desert Race winner is now only by 24 seconds behind a real chance of a podium position in his maiden Dakar Rally, gaining more than four minutes on current third place Chilean, Pablo Qunitanilla.

Price was happy with the stage ten result, “Each stage has it’s own challenges and todays was the very hight altitudes which really zaps a lot of you energy.

“Luckily for us the stage was pretty simple and quite fun to be honest.

“There was a mixture of terrain during stage ten, you had to be on the ball and conserve as much energy as possible.

“I’m really excited to be moving forward on a solid stage and see what tomorrow brings.” He said.

Joan Barreda Bort won the 371-kilometre timed component of the stage, ahead of defending champion Marc Coma and Ruben Faria, with Australian Price just 17 seconds further down the road from such qualified company, in fourth place.

Barreda, frustrated by a streak of bad luck which sounded the death knell for his overall ambitions in stage 8, was determined to grab as many stage wins as possible to finish the Dakar in style.

The Spaniard, possibly the most talented rider in the field, claimed his third win since the start in Buenos Aires after setting an infernal pace throughout the entire special and finishing around one-and-a-half minutes ahead of Marc Coma in Cachi.

Coma himself was the other big winner of today’s stage, as he increased the gap separating him from his closest rivals.

The marathon classification means that for the second time in the event, riders will again have no access to their teams overnight, placing a premium on careful management of the machine, and particularly of tyres, tomorrow.

With many kilometres of inhospitable terrain to go however, tomorrow’s stage is 512 kilometres between Salta and Termas Rio Hondo, where competitors who wish to make all their effort pay off will have to exercise maximum vigilance.

(first half of second marathon stage)

The mid-range KTM 350SX-F offers a lot to motocross racers, especially anyone looking to move up from a 350 to a 450, the 350SX-F might be just the perfect size. Read the review in Cycle […]

Toby Price is currently sitting in fifth place after the second stage of the Dakar Rally, after travelling west from Villa Carlos Paz to San Juan, Argentina. […]