Yamaha Motor Australia has announced it is the headline sponsor of the 40th edition of the Australian Four Day Enduro, held in Cessnock, April 2018.

The event returns to the area where the very first A4DE was held in 1978.

Malcolm Hall from the Cessnock MCC is following in some big footsteps, his father John ran that first successful Australian Four Day. 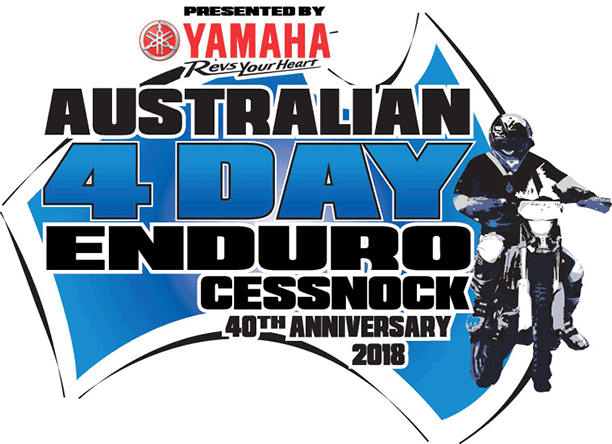 “Cessnock is the birthplace of the A4DE and also the venue for a very successful ISDE in 1992.

“Many riders fondly remember these events and to boost the profile of our 40th anniversary A4DE, we are catering for those people – and more – by introducing a vintage class,” Hall said.

Cessnock City Council has estimated that the event will bring over $2 million to the local area.”

The Cessnock Club will be assisted by other local motorcycle clubs Dungog, Oyster Bay and Central Coast to ensure the event runs smoothly.

YMA will bring its bLU cRU display truck to highlight how customers can step up from PW50 all the way through to the top end enduro race bikes.

A tricked up WR450F will be offered as a raffle prize to help the organisers put on a top event.

Parc Ferme will be at Cessnock Showground close to the middle of town, and special tests are within a 10 minute drive.

Spectators will see some great racing without travelling too far into the bush.

Peter Payne, Yamaha Brand Manager, said “Yamaha has had a long involvement with this iconic event, which is only fitting seeing as we produce Australia’s favourite enduro bike – the WR450F.

The A4DE is the annual pinnacle for our enduro racers and represents something to aspire to for our bLU cRU members.”

Payne, along with Yamaha Motor Australia’s Managing Director Steven Cotterell, competed in that first A4DE in 1978.

“Cessnock is the dirtbike heartland offering some of the most popular riding areas in Australia.

Great trails are guaranteed and with the additional Vintage Class attracting the popular older bikes and riders, the 40th anniversary A4DE is all set to be a real celebration of dirt bike riding,” Payne said.

Jorge Lorenzo has won the Australian MotoGP at Phillip Island with Dani Pedrosa claiming a valuable second place in a race that was shortened twice and run in a flurry of rule changes, black flags, penalties, and pit-lane mayhem in the first-ever grand prix with a compulsory mid-race change of motorcycle. […]

Marc Marquez continued his domination of the Indianapolis Grand Prix weekend by claiming a spectacular pole position on Saturday, beating the previous pole record by over eight tenths of a second. […]