2013 World Superbike Champion Tom Sykes looks sets for a great year dominating the time sheets on both days of the two-day WorldSBK pre-season test held at Spain’s Jerez this week, and setting a blistering lap of 1m39.24s on his Kawasaki, to be the first world superbike rider to break the 1.m40s barrier at the Spanish circuit.

His lap-record pace, was set on the second afternoon of the test, and is quicker than his record breaking pole position from 2015.

Recovering Roman, Ducati’s Davide Giugliano, was just over a tenth of a second behind Sykes, while 2015 championship runner-up and Ducati teammate Chaz Davies was third fastest, both just in front of experienced rookie Nicky Hayden on the Honda.

Australia’s Josh Brookes made his first appearance on the WorldSBK circuit this week, as he joins the championship for 2016 with his Milwaukee BMW team. His first race at will be at his home track, Phillip Island, at the season opener from February 26-28.

Brookes met his foes — and his race machine — for the first time at the Jerez test this week and spent the two days coming to grips with the circuit. The 2015 British Superbike champion made big improvements over the two days to break into the top 10 with a respectable 1m41.826s lap, with 79 laps under his belt, 1.9 seconds off the leaders. 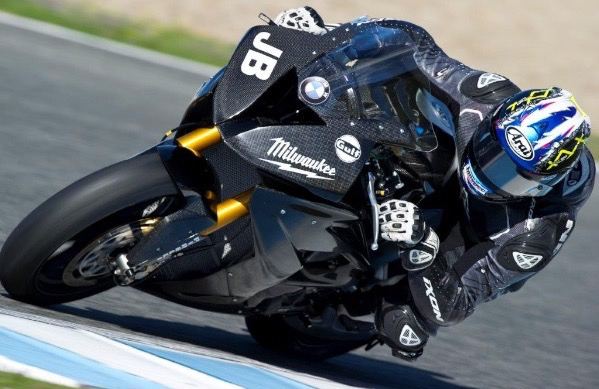 Post-test the Sydneysider tweeted: “Finished the day p10. Completed 79 laps. For me it’s a positive result. A lot still to come but very good progress for just two days on bike.”

Fog earlier in the day left conditions difficult until midday on day two, after which most riders were able to set more representative lap times. Sykes’ lap of 1:39.924 was the fastest of the day and of the test.

“All smiles round here because basically we have changed a lot of settings, exploring more parameters with the new bike,” said Sykes.

“It is confirmation of what we have developed in previous years that we have done a good job because this new bike is the ‘baby’ from those years. It is working well for both riders and Kawasaki has done a great job. There are still areas where I want to improve both the bike and me but to come away from both winter tests in Jerez fastest is good, because it is not my strongest circuit. This adds to the excitement and motivation for the coming season on the new Ninja ZX-10R.”

The Aruba.it Racing Team riders of Giugliano and Davies proved the only two capable of putting in a lap time within the same half second, 0.123 and 0.186 behind respectively. Giugliano escaped injury from a minor lowside at Turn 1 whilst pushing hard during the afternoon, the only consequence of which was an interruption to his race simulation.

The Honda duo of Nicky Hayden and Michael van der Mark also improved their lap times today and both by over a second. Hayden ended the day fourth with his teammate only marginally further back in fifth, the gap between the two smaller than previously.

Barni Racing rider Xavi Forés impressed by topping the timesheets for a good portion of the afternoon after ending yesterday’s session in eighth. Today, his 1:40.761 was over a second faster and good enough to keep him in the top six at the close of business.

The mood at Kawasaki remains buoyant after the two days of testing in Jerez, with Sykes fastest on both days and his teammate comfortable on a ZX-10R he is working on refining. Reigning Champion Rea remains convinced that the new Ninja will be faster and continues his search for the new limit.

“It is clear that the new bike has been developed more for another riding style and it asks you to ride in a certain way. So we are still exploring exactly how to extract the best out of the bike and we have changed many things,” said Rea, post-test.

“It was clear that when we arrived here the track grip level was much worse than the last time, so it required a little bit of a different set-up. Our testing philosophy this winter – testing big items and not getting carried away with the set-up – has really made sense here. It was the same track, same part of the world but a different character this time.

“We had a new fork specification to try and a different engine character. We are just using the tools in the toolbox now and understanding more about the new Ninja ZX-10R. We have been working calmly and methodically and if the starting lights went out at Jerez tomorrow we would not be seventh.”

Rea ended the day seventh overall and just in front of the Pata Yamaha riders of Sylvain Guintoli and Alex Lowes.

The fastest of the WorldSSP riders was once again reigning champion Sofuoglu, with new Puccetti teammate Krummenacher still the Turkish rider’s closest challenger.