THERE are not too many new bikes on the market today with the long lineage of Suzuki’s DR650SE. Sure there’s been some changes over the years since it was introduced in 1991 but they have been minor. 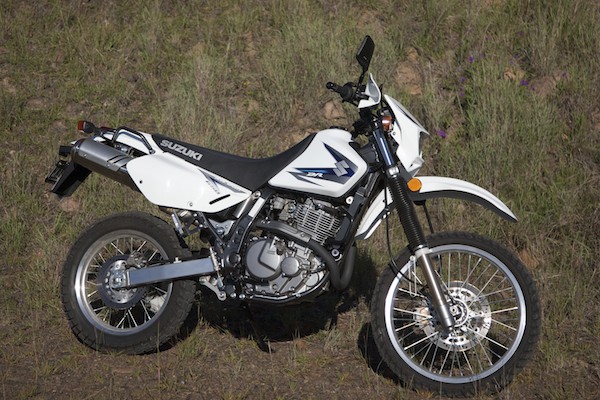 Before big bore adventure bikes became common the DR650SE (and model variants) was the staple choice of long distance adventure riders the world over.
They are tough and reliable, just the thing you need in the outback. What’s its role? I think the DR650SE was always meant to be an adventure bike rather than a trail bike, although plenty of owners took them trail riding.

In the ’90s it was common to see a DR650 fitted with a long range plastic tank and knobby tyres, and in this guise the bike was reasonably good in tough off-road situations, and very good for longer distance off-road work.

Fitted with some racks and soft panniers as well as the aforesaid tyres and tank the bike was nigh on a perfect weekend getaway machine, taking you to places owners of most other off-road bikes only dreamt of. Some riders stripped them down a bit and did some real hardcore off-road riding. 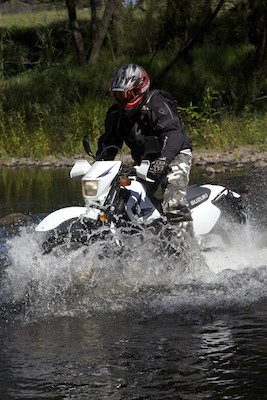 Times may have changed now but in those early days it was bikes like Honda’s XR600 that ruled the big bore roost.
Yes, they were a handful in the tight stuff but you didn’t have a lot of choice in those days if you wanted a large capacity trail bike.

You have to remember that when the DR650Se came out it was before the term ‘Adventure Bike’ was coined.
You had BMW’s 800 GS, Yamaha’s 750 and 600cc Super/Tenere models, and also the Kawasaki KLR600. Honda had the Africa Twin, and Cagiva the Ducati V-twin powered Elephant. There was even a DR750 Dr Big from Suzuki.

All good bikes in their own right, but there’s not many of them basically unchanged from those days, unlike the DR650SE. While other Adventure Bikes have become bigger and faster and with more options, the humble DR has become a bit overlooked.

While sales have no doubt shrunk since the glory days, the DR is still popular because it is still a great go anywhere machine. It’s as tough as an old boot, and the air/oil-cooled single cylinder engine is reliable almost to a fault.

I know people who’ve done ridiculous mileage on this engine, and although they will fail if abused, like any other engine, it has a very good reliability record. I owned a kick start DR650 Dakar back in the ’90s and it was a fantastic bike. It was a bit heavy but fine if you took your time in the bush.

On the open dirt roads it was simply glorious fun to ride, great on fuel, even if you were throttle happy. I had some great days in the saddle with that bike, covering lots of country miles at average speeds which would surprise lots of road bike owners.

What’s new
Not a lot really. It’s still a very underrated adventure bike, and the styling has been updated slightly along the way, but its heart is still the same. You can now get your Suzuki dealer to alter the seat height, from 885mm down to 845mm (with revised sidestand to suit).

Wheel sizes are the tried and true 21/17 inch combo, and suspension travel is a handy 260mm at either end.
Probably the only fly in the ointment for me is the steel tank. My old Dakar had a massive dent in the tank where I inconveniently fell off onto a rock. If I owned a new one I would fit a Safari plastic tank straight away.

Verdict
It’s as tough as an old boot, and the air/oil-cooled single cylinder engine is reliable almost to a fault.

The new DR650SE is hardly different to the old model, and it’s just as much fun to ride. One of my friends rode it and fell in love. He had been contemplating buying a Suzuki 650 Vstrom but is now looking at getting a DR. Sure, the Vstrom will do things the big DR can’t, but then again the reverse can be said too. He said, “how good would it be buying one each and doing some weekends away?”