POLARIS made Australian Rally Championship history recently by winning the event by .1 of a second in the Gawler Cup at the Scouts Rally in South Australia.

The Gawler Cup is a top 10 shoot out over a 1.05km stage in the town of Gawler SA and involves the fastest 10 qualifiers out of all classes in the Rally. Crocker and Foletta qualified in third place out of the five classes of vehicles and a total of 35 competitors. 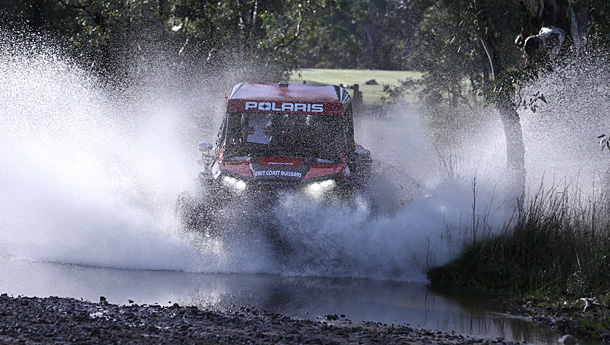 “This is just revolutionary; the SXS class has shown it cannot only match, but beat, Australia’s best in all vehicle classes,” said a thunderstruck Cody Crocker at the finish line where he beat the 2014 Western Australian Rally winning team of Reeves/Gelsomino in their Mazda 2 by a narrow .1 of a second.

“If this doesn’t change people’s perceptions of the SXS (side-by-side) class I don’t know what will. This is yet another display of how a race ready Polaris RZR XP 1000 for $35-40k cannot only compete but win up against the best the Rally world has to offer. Most of the other machines in the top 10 are easily worth $100k plus and they easily cost over $100k to keep running.

“Other classes and drivers better watch their backs, Polaris are coming,” said an ecstatic Greg Foletta. “In New Zealand last month the Polaris Team driver Ben Thomasen took the overall win by a ridiculous margin at the 2014 Endurance Championships held in Dovedale. Ben covered 504km over two days racing against trucks and buggies worth $100k plus and not only did he win but he was the only car to finish in a total time under eight hours.

“The Polaris RZR XP 1000 is now the machine to beat in both Australia and New Zealand.”

A cold and wet weekend at the Scouts Rally in SA had its ups and downs for most of the SXS teams with the first day of Racing on Saturday not showing any mercy on the reigning champs Crocker/Foletta or the Can-Am team of Guest/Green with both teams suffering some belt problems.

Not easily deterred Crocker/Foletta who currently lead the 2014 SXS challenge with a total point’s tally of 146 up 16 points on second place came out fighting on Sunday’s heat. Sunday’s racing over seven stages and 54.38km saw the Polaris Racing team pull out all the stops to place first in each stage.

Crocker/Foletta reigned supreme through the day averaging a 10 second margin on each stage over the nearest competitor. This effort was then topped off by Crocker/Foletta smashing out a time of 1:03.5 in the top 10 shootout to beat Reeves/Gelsomino time of 1:03.6 in their Mazda 2 by a bees proverbial .1 of a second.

In second place for the Sunday was Polaris team Hughes/Piper finishing 1:07 minutes after Crocker/Foletta overall. Hughes placed second in four out of the seven stages and seventh in the top 10 shootout with a time of 1:06.8.

Polaris has unveiled a TV campaign highlighting ROPS protection on 23 of their machines in response to a WorkSafe announcement saying crush protection devices (CPDs) will become mandatory in Victorian workplaces. The decision from WorkSafe […]

Polaris Industries are releasing the first-ever ATV designed specifically for the Australian market. […]