IF YOU own a sports tourer or cover a lot of distance this article is for you.
This is one product launch I had been looking forward to – choosing the right tyre is one of the most important decisions you will make for your bike, right up there with where you get it serviced.
We spent a day sampling the new Pirelli Angel GT for sports tourers. 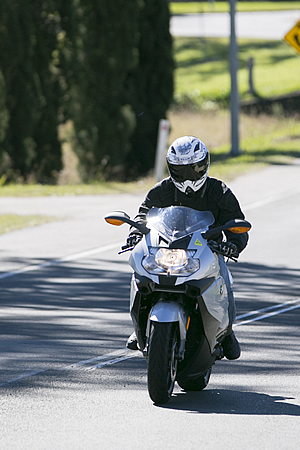 A wrong decision can be costly and I have found that most tyres are at a similar price point, so it really does come down to knowing what is available and choosing the best hoop that suits your purpose.
The topic of technology is at the front of almost every product launch these days and the one theme that keeps popping up is that manufacturers in general are really developing products that are well focussed.
Technology breakthroughs mean each particular model of tyre can be matched to your riding preferences, but how do you get the right one?

How do you test a new tyre in the real world?
For Pirelli’s Angel GT, the importer’s idea was to take a dozen of the best bikes you can find, throw in some tasty Gold Coast Hinterland roads plus an afternoon at Morgan Park race track.
Sound like fun? It certainly was! But it also gave an insight into how tyres are improving with technology and just who might suit the new Angel GT range.
With all these good times on offer and only one day to develop an opinion, it also meant Pirelli were putting its reputation on the line.
But more on the actual riding later…first up let’s have a look at some data and find out about this tyre.

The Angel GT is an evolution of the ST range and there are a host of minor changes that in total represent a completely new offering.
Front and rear are available in 17″ and 18″ sizing with the wider rears having an ‘A’ option, representing 2-ply construction.
The 2-ply tyres are designed for extra stability and performance on heavier motorcycles – so if you have a big bike carrying luggage or do a lot of two-up touring, they might be a good choice. 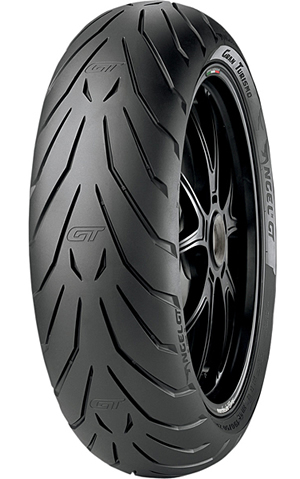 Like most modern tyres the construction is bi-compound on the rear, effectively meaning the centre is pretty much a slick, which will make for better mileage while the shoulder is 100 per cent silica for cornering grip.
Front tyres are the one compound – 100 per cent silica. Interestingly, Pirelli says it can achieve the same mileage from single compound tyres and the dual compound trend is driven by marketing.
The difference in profiles between the ST and GT is also interesting. I don’t know how the engineers come up with this, but they have worked out that a slightly wider but shorter contact patch will reduce slippage and stress.
There is always slippage, even if it is imperceptible, and this means heat is generated. So the idea in a shorter contact patch is to reduce heat and friction, with the benefit of reduced wear.

Like the ST, the GT is multi radius but the new design allows for an extra 5 degrees in lean angle.
Rain performance also had a makeover – the amount of tread has been reduced, but wet weather performance has increased due to finding the optimum efficiency and angle of the tread grooves.
Reduced groove depth on the shoulder has the effect of making the tyre more rigid under load, which offers better stability.
The other big change is the tyre construction, with Pirelli drawing on it’s racing lessons to deliver a better compound.
In simple terms the carcass is a little stiffer and stronger to support the slightly different profile.
The guys from Pirelli also said work had been done to maintain the shape of the tyre as lean angle increases, the benefit being you should notice a more consistent change of direction.

Apparently Pirelli has a team of tyre testers constantly riding looking for improvement, not to mention boffins hard at work to find that ultimate tread pattern.
Right now somewhere there are engineer nerds mixing nano materials and polymers to make the next generation of tyres even better. It certainly is a fascinating process.

The end result with the GT is a claimed 30 per cent higher mileage over the ST which is a massive jump, especially when you consider how small the visible physical changes were.
The ST will continue in the Pirelli range at a slightly cheaper price point, while the GT will become their premium sports touring tyre.

After finding out all this information it was now up to the assembled crew of journo’s to hit the road.
The bikes to throw a leg over were spot on – let me tell you it was a fantastic sight lined up in the car park at Link International’s Yatala headquarters.
Honda VFR1200 and CBR600, Aprilia Dorsoduro, BMW K1300 S and R, Suzuki Hayabusa, Ducati Multistrada and a pair of Husqvarna Nuda 900s (which sounded awesome by the way).
To top it all off, we would be climbing out of the Gold Coast and heading across to Warwick through the Hinterland, some of the most awesome scenery you will find anywhere. 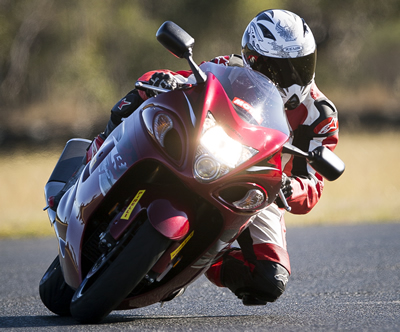 Now there isn’t really too much to tell you about the tyres from the road ride. I was on the BMW K1300 S and all I can say is the tyres felt fine (so did the K1300, that is one awesome machine).
There were some great twisty sections but really, it’s a bit hard to get a proper opinion of a tyre when the main selling point is increased mileage and wet weather ability!
The main thing is, there were no problems, even after switching bikes. The Hayabusa was fine as well – a better idea for us at Cycle Torque may be to fit a set of these tyres to one of our long term bikes to get a proper view.
Before we knew it we were in Warwick and about to start laps of the Morgan Park circuit.

The first bike I took to the track on was the Hayabusa. This was really going to be the most interesting part of the day to find out what kind of feedback the tyres gave.
Morgan Park is in stark contrast to the straights and hairpins of Queensland Raceway. There are constant hard changes of direction which link together nicely with plenty of width and a pretty decent surface.
We all entered the track at the same time and the most obvious thing was that the tyres got up to temperature pretty quickly.
The day itself was a little crisp, but the grip levels were still there. Impressive from a tyre being touted as a sports tourer.
Even more impressive was after a few sessions, even on a rubber shredder like the Hayabusa, the rear tyres weren’t really showing any visible signs of wear.
For the way these bikes were being ridden, I really expected to see a lot more wear showing. 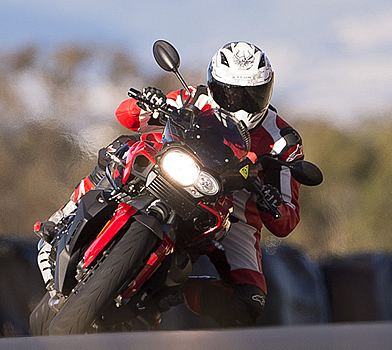 As the afternoon progressed, this is where it could get interesting for Pirelli considering bike journo’s aren’t known for holding back…
The guys from Link International were doing a good job faking not looking concerned but session after session, there were no dramas for anyone.
I got a touch of squirming under acceleration at times, but it was even and predictable, which is what you want.
The fun bike of the day had to be the BMW K 1300 R. It is a total beast, looks cool and goes hard – and it kept turning in nicely lap after lap. On a sports touring tyre.
Even after a few sessions end on end, the Angel GT’s stood up to the task – and I have to admit I was surprised.
The other journo’s were reporting similar results – I don’t think any of us expected these tyres to be this capable at a track day.

The verdict is – over a wide range of bikes the response is the same – these tyres heat up quickly and allowed me to explore my limits without any worries.
Obviously, you aren’t going to push them as hard as a softer tyre, but it is all relative to the situation.
I would be very comfortable fitting these tyres to my bike and turning up to a track day and actually having a good go, which is a big call when you look at the conditions the Angel GT is really designed for.
The bottom line is, technology is improving and Pirelli is responding to what riders want to do with their bikes these days.
To get a better idea of wet weather ability and mileage, we just need a long term test – but as much as I can say from one day, thumbs up so far for the Angel GT.

Pirelli is giving away tickets to the Phillip Island round of the Superbike World Championship next February to people who buy selected Diablo or Angel GT tyres. There are limited numbers of tickets available, and […]

Link Loot for your bike