At his home event Pedrosa took his first pole since the 2013 Catalan Grand Prix with a 1’40.985s lap in the Barcelona-Catalunya heat and in doing so the Repsol Honda rider ended Marquez’ successive pole run. For full Q2 results click here.

Dani Pedrosa: “I am very happy to have taken pole position today, in front of my family and the home fans! I am also delighted that, for the first time this year, I felt good on the bike in qualifying. I’ll try and get a good start from pole position tomorrow, I am sure that it will be very hot and we will have to manage the tyres well during the race, but we will try to do as well as possible!”

Following his fascinating battle with Marquez at Mugello Lorenzo (pictured below), qualified in second place and will be looking forward to fighting the Honda riders again at a track where the Mallorcan has a strong record and has won the last two MotoGP races. 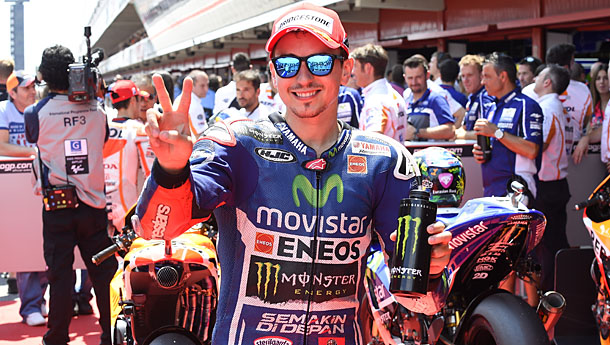 Marquez walked away from his first crash of the year after losing the front end at turn 1 towards the end of the session. The young MotoGP World Champion therefore starts third on the grid, his first non-pole result since Motegi last year.

Jorge Lorenzo: “I made a very good lap, I risked a lot, especially in the braking to make it. Finally we made a good setting for this track, it’s hard because with the track and temperatures it’s hard to make the bike stable. Tomorrow we will try to make it even more stable. We hope to remain consistent and strong like in Mugello to fight for the win again. We all hope it doesn’t rain because a wet race would be difficult to judge. It would be great to win, everyone wants to!”

Marc Marquez: “Today I made the first mistake of the season, so I need to apologise to the team because it was my fault. The strategy we had set out was coming together perfectly, but when riding with the last tyre I braked too late. I knew it was my last attempt, so I tried to go into the corner anyway. That was not the best choice; I should have written off the lap, but these things happen when you are riding at home; you always try to give a little bit extra. We know for tomorrow that there is no more room for improvement on that corner and that we have a good setup with which to fight for the win”

Stefan Bradl: “These two days have been very positive for us and we are quite happy about this second row. We demonstrated that our pace is pretty good in all sessions and we are not far from the front guys. Before the qualifying session we made some little adjustments on the suspensions that worked pretty good and the tyre situation is clear now.”

Valentino Rossi (Movistar Yamaha MotoGP) admits qualifying is not currently his strongest point but he equaled his second best Q2 result of 2014 so far in fifth, having qualified 10th last time out in Mugello.

Another home rider Aleix Espargaro (NGM Forward Racing) was delighted with his qualifying effort as he completed row two, just 0.323s behind Pedrosa.

The fourth row will comprise Pol Espargaro (Monster Yamaha Tech3), Andrea Iannone (Pramac Racing) and Alvaro Bautista (GO&FUN Honda Gresini). Iannone and Bautista made it through from Q1 as spots of rain threatened to disrupt Q2.

The conditions stayed dry but Bautista suffered a big Q2 highside at turn 7 and was stretchered away, though he appeared to be ok.

Alex Marquez taken pole in Moto3 with Enea Bastianini and Alex Rins joining him on the front row. Marquez produced a superb 1’50.232 lap to shatter the Barcelona-Catalunya Moto3 pole record and outpace his nearest rival by more than 0.6s.

Bastianini (Junior Team Go&FUN Moto3) will be delighted with his qualifying result, featuring on the front row for the first time, at just his seventh Grand Prix.

Marquez’ Estrella Galicia 0,0 teammate Rins ended up third but had a huge turn 10 highside at the end of the session and suffered a fractured toe on his left foot, with his fitness to be reviewed on Sunday morning.