I watched a movie called Hell or High Water a few days ago, and a little passage in the film has stuck with me.

For anyone who hasn’t seen it, Hell or High Water is a story about two brothers, who ironically, rob a chain of Texas Midlands banks. The brothers owe money to Texas Midlands and in the following days, come hell or high water, it’s going to foreclose on their family’s ranch. So they’re on a mission to pay the bank back (with its own money). 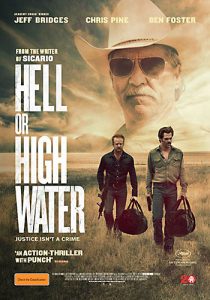 Set in and around the state of Texas, the townsfolk feel contempt for Texas Midlands. The GFC looks like it has hit them hard. And the bank? Well it’s been robbin’ them for years, as they say.

In this one passage two Texas Rangers, played by Jeff Bridges and Gil Bermingham, walk into a diner across the road from the bank they believe the brothers will hit next.

The waitress, an older woman, asks the pair, “So what don’t you want?”

You see, she’s been working at this diner for 44 years, and nobody ever ordered nothin’ but T-bone steaks and a baked potato.

Let’s just say she doesn’t mince her words and she “don’t sell no god-damned trout…”.

The men oblige her request.

I think this passage has some relevance to the motorcycle industry in that poor to recovering sales in Australia may be partly due to too much choice.

What does it have to do with motorcycles?

FCAI figures show Husqvarna, Indian and Victory are the only road bike manufacturers whose half-yearly sales have increased compared to the 12-month period before it.

Husqvarna’s Australian distribution was up in the air for a little while, with the company settling in nicely since it was taken over by KTM. Husky’s road bike line-up is simple – mostly enduro and supermoto machines. Anyone in the Australian market giving serious thought towards a Husky dual sport doesn’t need to spoil themselves for choice. They generally buy a Husqvarna or a KTM. So what don’t you want?

Indian is seeing some strength because of its heritage, but it’s come at a price, with Polaris stablemate Victory ceasing production earlier this year.

With Australia its biggest export market, was the abundance of choice a liquid nail in Victory’s coffin? We’re now seeing them being bought, literally, like never before. They’re being heavily discounted as part of the closure. Some people may be buying them in the hope it becomes collectible, but I think most are taking up an offer too good to be refused. Nothing wrong with that. They’re still great bikes. If it comes back to ‘what don’t you want’, it’s understandable people don’t want to pay full-whack for anything.

As for the other manufacturers – the turndown ranges from the small end with KTM (-1.6 per cent), who, like Husky, appear to keep their road bikes simple with a registrable dual-sports,  then there are the Dukes, Super Dukes and Super Adventures. Maybe that’s the key to its relative stability. Don’t want a Duke? Then get a Super Duke… Don’t want that either? Then it’s a Super Adventure or nothing. Easy.

At the higher end is Aprilia. It needs to increase sales by over half to remain on track, no pun intended.

They’re the exception to the rule. While we’ve seen updates to machines, we haven’t seen an influx of new models. It could be due to the change in distributor last year, from John Sample Group to PS Importers. JSG may have had a run-out sale which bumped the numbers before PS took over the whole shebang…

In 2017, it’s fair to say that there’s never been so much choice when it comes to buying a new road bike. The trend has emerged where one platform can produce a number of different variants. Do you want the road bike? The slightly off-road bike? Maybe a modern retro is more your thing? Cruiser? Bobber? Café racer? A learner-approved version? The 800? 1000? What do you want? When there’s too much choice research shows you can give up looking.

Barry Schwartz studies the link between economics and psychology. He reckons when we’re overcome by choice the brain looks for the easiest option. Sometimes that means not choosing. The other thing he points out when there’s too much choice is ‘buyer’s remorse’ or FOMO (fear of missing out): one may be dissatisfied with their choice regardless of if the best decision was made.

While Schwartz’s research suggests too much choice will eventually lead to more dissatisfied owners, it’s impossible not to notice what started out as a branding exercise to take on other markets around the globe, could be partly affecting Oz.

In October, Ducati is reintroducing its learner-approved Monster 659 to the Australian market, and while it’s one more bike, FCAI figures show it may be vital to the brand’s customer acquisition. Ducati sales are down 17.4 per cent in the first half of this year compared to the previous period – roughly 150 units over six months. Coincidentally, about 300-odd 659s went to loving homes each year on average the last three years it was available. A spectrum of Scramblers haven’t picked up the slack in Australia yet, nor have the current Monsters.

But… Like I said, it’s one more bike, so I fear rather than stimulate new sales, it may be mostly taken from other areas: either the Scrambler Sixty2, but more likely market competitors like the Yamaha MT-07LA and its variants, Kawasaki’s Z650L and its variants, and Triumph’s Street Triple S. If Schwartz’s research is right and there’s too much choice some people will find the whole thing too hard and choose none altogether, making the pie smaller.

The learner market is arguably the biggest arena of contestation in Australia. Manufacturers have to be there. Encouraging new riders with lots of choice is the current solution. How well is it currently working and if it is, will it continue to do so?

Also coming in October is the FCAI’s sales figures for the third quarter of the year (January-September). I really look forward to interpreting that data. Hopefully it proves me wrong and we see the market continue to recover.

Later on in the month we’ll find out much more from the overseas bike shows, particularly how many new bikes might be coming next year. Triumph has already said it will start making small-capacity motorcycles in the Third World for a ‘world market’, following BMW, Harley-Davidson, KTM, Royal Enfield and others before it. And so it continues.

It’s a polarising opinion to hold, because I love everything about new bike news, riding and testing new models. While part of me thinks ‘the more the merrier’ there’s evidence that suggests otherwise. Maybe, just maybe, bike sales in Australia will increase if manufacturers can start drilling down what you don’t want instead.

IT’S your last chance to book a free ride on Honda’s brand new CBR500R, CB500F or other LAMS approved Honda motorcycles, this weekend during the HART Come And Try It Day. HART (Honda Australia Rider […]