DUCATI’S 1199 Panigale and its higher spec ‘S’ sibling are very much riders’ machines. They are undoubtedly very fast, they are frantic to ride, they are not all that comfortable if you are commuting or touring at a snail’s pace. But they both give you a spine tingling riding experience not many other machines can offer.

And there are some minor changes for the 2014 model, aimed at making it more user friendly.

There have been question marks over whether the Panigale is better than the 1098/1198 models it succeeded, and fair enough too. Those two previous generation bikes have had lots of admirers, and still do for that matter, because they are superb motorcycles.

Carlos Checa was the first to race a Panigale in the WSBK Superbike championships, and was off the pace initially, unable to regain the form he had on the 1198.

The Panigale is now starting to hit its straps on the world stage though, finally becoming one of the leaders of the pack in the current World Superbike Championship.

Apparently much of the issue has been the power of the engine, but it’s as fast as anything I’ve ever ridden on the road. In fact I can’t imagine anyone using the engine to its full potential unless you were on the track, and even then… It’s hard to really compare them directly though. 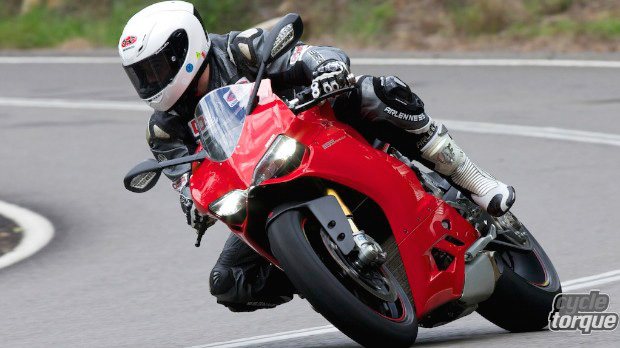 For a start, the Panigale makes the old shape look very dated, even though I think the 1098 shape was one of the prettiest bikes ever made. When Ducati designed the Panigale it really did so from a complete blank sheet.

Everything is different to before: frame, engine, electronics, you name it. I suspect there is no part, which is interchangeable from the previous shape Ducati superbike.

Testing these two bikes back to back, one with manually adjustable suspension, the other with semi-active suspension, makes you realise that although the upspec S model is very good, it’s not light years ahead of the standard Panigale, which is also an amazing machine, especially if ridden in the right circumstances and with, shall we say, ‘verve’.

The mechanicals
Both bikes share the same specification Desmodromic Superquadro L-Twin engine, with 195hp. The engine is an integral part of the chassis, and the set up differs greatly from the 1098/1198. In fact the engine is the chassis, with a monocoque frame section bolted to the heads.

This monocoque chassis is also used as the airbox for the engine. Clever.
At the front, the forks are bolted to the frame section.

Classic bikes fans will immediately recognise the Vincent V-twin as a similar design, and modern race fans the Desmosedici. Another design cue of the Panigale is the engine has been rotated backwards, so it could be moved forward 32mm, thus improving weight bias.

The engine also has the barrels cast as one with the engine block, then using Nikasil coated wet liners for the massive pistons.

One of the things, which makes this engine very different in feel to the previous Testastretta Evoluzione, is the massively oversquare bore/stroke ratio. I suspect it’s also one of the reasons why some people used to the older engine have struggled to come to grips with the new one, racers included.

With a 112mm bore and 60.8mm stroke this motor likes to rev hard. With such a huge piston Ducati has been able to increase valve size 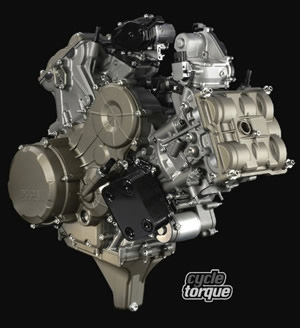 This obviously allows the engine to breath much freer than the earlier donk, but it makes its power in a totally different way now, almost demanding the rider to thrash the hell out of it. But remember, this engine isn’t an update of the old one, it’s a totally different engine.

Fuelling the fire are massive 67.5mm oval throttle bodies with two injectors per pot. The first injector is fitted below the throttle for low load use, while the second injector is above the throttle body for when you are turning the twist grip all the way south.

The ride-by-wire system allows the Panigale to have lots of rider aids. There are three Riding Modes: Race, Sport and Wet. Each riding mode can also be tailored to suit your needs. For example, you can change the default traction control and ABS level of each riding mode.

There are eight Ducati Traction Control (DTC) levels, with Level One the least intrusive. This is an integral part of modern high end bikes, and with the performance the Panigale puts out I’m sure most riders would appreciate it being there.

In reality most riders would barely even notice Level One, if at all, but Level Eight really does kick in very early, making it a bit of a pain if you like riding on the quick side. Great in the wet but that’s the only time you’d want it.

You control all of this technology via the TFT instrument panel. As you select each Riding Mode you get a slightly different dash, mainly between Race and Sport.

If you are racing the bike or doing a track day, engine revs and lap times are more important to know than your actual speed so that’s what’s prominent on the dash.

On the road it’s the other way around. It’s a pretty amazing piece of kit really. I found it a bit confusing at first but once you get the gist of what buttons to press and so on it’s a doddle to change the settings.

What most owners would do is individualise their own machine. For example, you might have Sport Mode set with Rain Mode’s softer suspension settings (on the ‘S’) and so on. There’s almost no limit to what you can change on the electronic suspension.

Now, on to the suspension which is the biggest difference between the standard and ‘S’ model machines.

Likewise with the Ohlins TTX36 rear shock, which also has an adjustable linkage. You can manually adjust the preload. The wheels are different on both bikes too, with the standard jigger getting 10 spoke wheels while the ‘S’ gets three spoke Marchesini forged alloys. 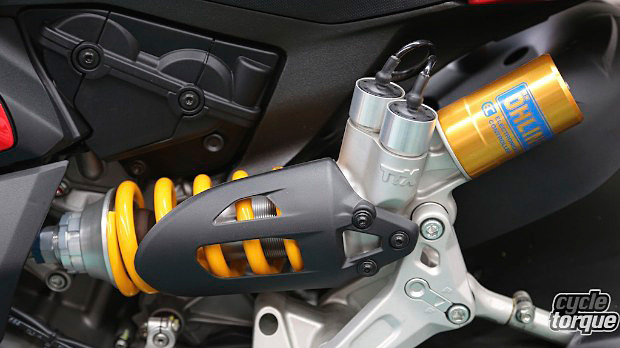 Both bikes get massive six inch rear wheels on the single sided swingarm too. Brakes are same too, with 4-piston radially mounted Brembos doing the business up front. ABS is an option on the Panigale, standard on the Panigale S. The Panigale S is actually 2.5 kilos heavier, which is down to the standard fitment ABS.

In the wild
Thinking back on one particular day during the test has fond memories for me. It was one of the first times my son and I were out together, trying to explore the limits of a machine, which, really, we were unable to do, such is the performance these machines have.

Out on the open road, the bikes together at speed, rock solid, was a magical experience. As I said earlier, the Panigale engine likes to rev due to the ultra short stroke (with 12.5:1 compression. It needs a decompressor system to help starting), and I think you need to take a different approach to getting the best out of the bike, if you’ve sold your 1198 and bought a Panigale.

You could be a bit lazy with the Testastretta Evoluzione engine, not too lazy mind you, but try and ride the Panigale the same and you will not enjoy it anywhere near as much.

Not everyone can ride a Ducati fast on the track. I know that sounds probably a bit conceited but if you’ve come from a four cylinder sportsbike which loves to rev, and you do the same with the Testastretta engine you will lose valuable speed by over revving it unnecessarily, and not utilising the massive torque on offer.

With the Panigale I found it the opposite. If you rev the bejeezus out of it, it responds well. My point is I guess, is that riders used to, say, a CBR1000RR will probably gel quicker with the Panigale than a rider used to older Ducatis. Anyway, moving on.

The styling of the bike gives you the impression it has an ultra short wheelbase but not so. As I said, at high speed it is superb. In corners it tips in with neutrality, can hold its line beautifully, and power out on the back wheel (with DTC at the right level). Even though it looks tiny, there’s still plenty of room to move around on, even for bigger riders.

It’s got all this power to propel you forwards but it’s also got some of the best brakes on a motorcycle. We all know Brembo calipers are top shelf, so there’s probably nothing more to add there. 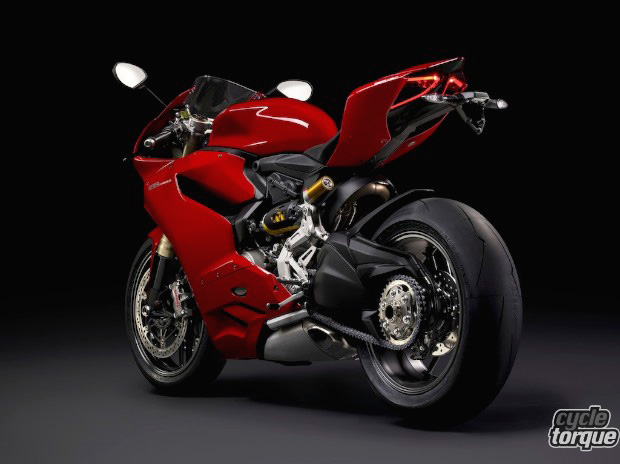 The two major things the ‘S’ has over the standard Panigale, is the Ohlins suspension and the lighter wheels. This comes at a price of course, but what does it mean in the real world? In my opinion a poorly set up ‘S’ with the electronic suspension will be no better, or even as good as the standard Marzocchi kit.

That’s because the Marzocchi stuff is so good anyway. But take the time to really sort out your individual requirements on the ‘S’ and you will reap the benefits.

The lighter three-spoke wheels make the bike sweeter to ride in the corners too, not heaps better, but enough to make it worthwhile if you have the extra cash.

Faster riders will love the slipper clutch, which most riders won’t really notice too much on the road but on the track it is a real benefit. Likewise with the quick shifter (DQS).

And the computer updates? Whatever has been done has worked.

At lower speeds the bike is nicer to ride, doesn’t feel as harsh on the throttle. When you are on the gas it’s almost irrelevant anyway but the second generation is a better all-round package for everyday riding.

Verdict
How can you not appreciate a bike like the Panigale? It truly is special to ride and to look at. Over the years Ducati Australia has managed to keep the prices fairly similar to what they were over a decade ago, so that has allowed many fans of the marque to get on board when perhaps they wouldn’t have been able to.