WHEN it was first released back in 2011 the R15 filled a neat little gap at this end of the market and it went on to be good little seller for Yamaha. And for good reason, it looked sporty and as we know street cred means a lot to many a learner rider. 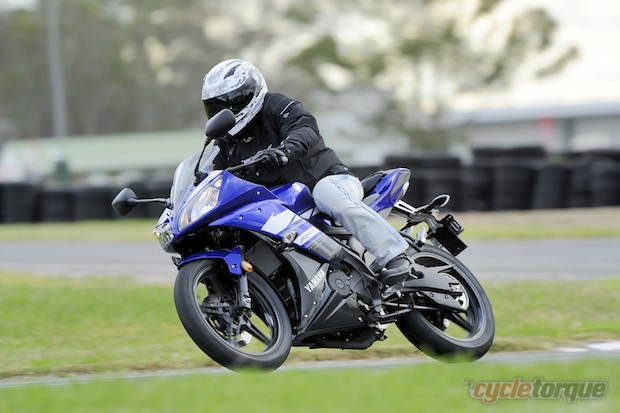 There are a couple of different things that strike your eye in the new model. The rear guard has a much sportier look, more like the R6 with its nice high tail that even has a neat little storage compartment. The original 2011 rear guard was such a stretched out and elongated affair. The seat is no longer one complete unit but is split between rider and pillion and that adds to the overall sportier look of the bike. The five-spoke wheels are now split spokes rather than five solid individual spokes. I prefer the look of the new version.

Again I think this is part of Yamaha’s strategy to bring this model “into the R6 family” so to speak. There’s also a new silencer and LED tail light. Yamaha is producing this little baby in a sexy new red and white variant which does look really nice as well as the other two colours of blue and black. There are a couple of other changes but we’ll get to those.

We picked our rides up at Yamaha headquarters in Sydney and rode to the Eastern Creek Go-Kart track, which was the venue of the 2011 model launch. I liked that idea because I thought it offered the chance to re-visit our original impressions of the bike on that track as well as the chance to take in some of the surrounding countryside on the way there and back again. 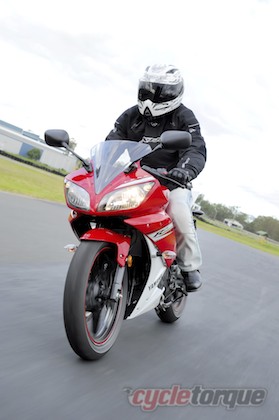 The swingarm is new and its slightly longer than the original 2011 version. It’s cast aluminium with a truss structure to enable better rigidity. Although it has a longer wheelbase the steering head and trail are still the same. I notice that the seat height is 10mm higher than the 2011 at 800mm. Bearing in mind that I am vertically challenged I didn’t even realise this until I compared the specs of the two models after the launch. Just as I didn’t notice this model appears to be five kilos heavier than its predecessor. What I did notice however was that this is a very confidence inspiring machine to ride. It felt ever so light flicking from one side to the other on the Go-Kart track.

This version actually has 4Kw more power delivered through a reconfigured ECU for better drive, economy and emissions and there’s a revised throttle action for more linear delivery. The short stroke (57 x 58.7mm) makes for a really revvy little engine that spins very freely. There is new gearing too which helps in the acceleration department.
The new gearing is 15/47 (as opposed to 14/42) and all this hits the ground through wider front and rear tyres with the rear being a radial. The bikes will come standard with Nylogrip Zapper tyres but our test bikes were fitted with Sava sports tyres. The rear disc has also been increased in size and is now 220mm instead of the old 203mm but I felt the brakes were always up to the task anyway.

I’m not enough of a technical guru to be able to tell you whether the new link-type rear suspension works any better, but it certainly worked well during the launch, both on the track and the road. Yamaha assures us the new system operates more efficiently and helps deliver some of those more responsive handling qualities that I enjoyed on the test day.
The 149.8cc four-stroke liquid-cooled engine is a littler pearler as you’d expect from this manufacturer. We happily put the four-valve, single cam engine through its paces on the day and, as mentioned previously, not just on the Go-Kart track.

We took to the countryside for a nice long detour well before we got there and discovered a bike that can quite happily reach 100kmh and beyond out on the open road. It’s all well and good to have an agile, thrifty machine in the commuterland that is the city, but it’s also nice to know that once you’re out of gridlock that your machine is quite capable of doing what you expect out in the real world, and keeping up with the traffic in safety.
There are lots of things you can’t see such as the DiASil cylinders being made of all-aluminium with 20 per cent silicon content to reduce oil consumption and improve fuel economy.

Other such things like the crankshaft being offset 7mm from the cylinder centre to reduce friction and produce more power just adds to the goodies you can’t see with the naked eye. Things that you can see include the full sized Deltabox frame design and full sized forks with the longer swingarm. Lots of things are unchanged from its predecessor like the six-speed box, which is as smooth as you would expect, the electric starter and also the 12 litre fuel tank capacity.

It’s an economical little engine so 12 litres should let you ride and commute to your heart’s content. Other things like the instrumentation are also basically unchanged, which is no surprise as the original mix of analogue and digital was quite functional and easy to read. Naturally, you’d expect to get 12 months, unlimited kilometre parts and labour warranty as you do.
The 2011 model went on sale for a touch under $4K so the new model priced at $4299 including GST, plus on-roads is pretty good value for a quality built machine. It is a surprise packet seeing it only packs a 150cc engine. Don’t write it off because it’s not overly endowed in capacity, because it’s an amazing and cool little LAMS bike.