Honda Repsol Team’s Dani Pedrosa (above) claimed his second Jerez victory on Sunday afternoon, sealing his first race win of the 2013 MotoGP season. Team-mate Marc Marquez made it another one-two finish after he dived past Yamaha Factory Racing’s Jorge Lorenzo for second place at the final corner.

Pedrosa took the lead from Lorenzo at the Dry Sack hairpin on the sixth of 27 laps, and was immediately able to secure a small but vital cushion, to win by 2.487 seconds. The last lap, he said, was particularly special, in front of 111,259 fervent Spanish fans.

Pedrosa made it look easy, compared with his team-mate’s second place. Twenty-year-old Marquez had been fighting to find a way past Lorenzo mid-race and again in the closing laps. Every attack was repulsed, and the move ironically came at the newly-named Jorge Lorenzo corner at the end of the very last lap, with Lorenzo left fuming after contact was made.

Dani Pedrosa
“It was a beautiful race. I was able to ride the bike well, even though it was difficult because the tyres were really on the limit. I couldn’t push too hard because of that, so I had to ride carefully. I was able to maintain a good advantage throughout the race and collect this win at home as a result. It was fantastic, especially seeing all the fans in the stands; this year we’ve had a lot of people come to watch this Grand Prix. I also want to say ‘Happy Mothers Day’ to my mum and thanks to all my team; it’s been a great day!”

Marc Marquez
“It was a very good race. I gave 100 percent from the first lap through to the last. At some points in the race I felt better than at others, but I never gave up. I tried to stick as close as possible to Lorenzo, although it was very difficult. I couldn’t quite close the gap, but I didn’t let him get away either. It was a very hard race, because if you get one or two seconds difference between you, you relax a bit. I didn’t relax though, and I am very happy. I think that, above all, the end of the race was really good for the fans. I want to apologise to Jorge, because it was a racing incident – a last lap move that happens when you are on the limit. The most important thing is that we both finished the race, and I hope that that’s the end of it.”

Jorge Lorenzo
I have always been positive so today also I am going to be positive, to finish the race with sixteen points is always a great result. I was second for the whole race and then lost the place on the last corner so it wasn’t the perfect race. The perfect race is a victory and if not possible second, the next is third. Today we got another podium and we are quite close to the leader. On the other hand we have to improve the bike. I think I made two mistakes in the race, in the start I started really badly and in the last corner, I thought Marquez was further behind than he was so I didn’t take a defensive line, this was my second mistake.” 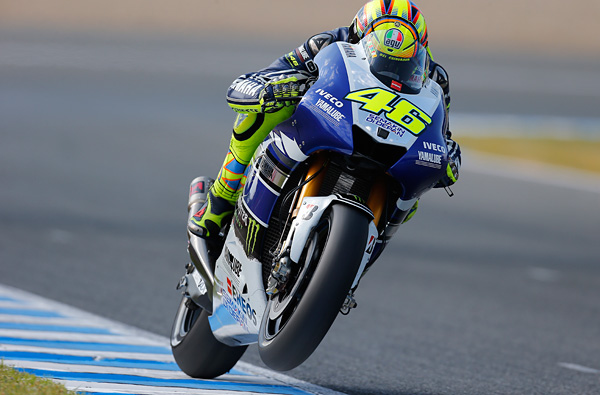 Valentino Rossi (above) had a lonely ride to fourth place on the second Yamaha Factory bike, with Monster Yamaha Tech 3’s Cal Crutchlow overcoming GO&FUN Honda Gresini’s Alvaro Bautista for a top five spot at the end of a difficult weekend.  Bautista had been ahead of Crutchlow mid-race, and was barely two seconds adrift at the finish. Ducati Team duo Nicky Hayden and Andrea Dovizioso made the top eight while test rider Michele Pirro enjoyed a strong first ride of the campaign to 11th on the squad’s GP13 Lab chassis.

Valentino Rossi
“It was a difficult race. Unfortunately we were not able to be better, we suffered a bit with the conditions and we tried to do the maximum. We improved the set up for the race and we did a good start. I was with the top group but unfortunately I was not fast enough to stay with the top three. Lap by lap the gap was bigger so I think we have some work to do. Here in Jerez I expected we could go faster than Honda but they arrived in front of us. I wanted to be on the podium but unfortunately it was not possible, we will try again next week.”

Hector Barbera and Avintia Blusens’ impressed by qualifying tenth on the lead CRT machine, but on race day the Spaniard fell to 12th as Power Electronics Aspar’s Aleix Espargaro took CRT honours for the third time in as many races, finishing ninth from Tech 3’s Bradley Smith. As Blusens’ Hiroshi Aoyama tumbled to 18th in the closing stages, Michael Laverty scored the first points for PBM’s own-built bike by coming home 13th and ahead of Came IodaRacing Project’s Danilo Petrucci and NGM Mobile Forward Racing’s Colin Edwards, who also scored for the first time in 2013.

Stefan Bradl (LCR Honda RC213V) crashed out in the early stages, but Grand Prix rookie Bryan Staring (GO&FUN Honda Gresini FTR Honda) was just seven tenths of a second away from scoring a first point, finishing 16th after holding his own in a strong CRT battle aboard his CBR1000RR-powered machine. Staring was at the back of a tight four-strong group, but gained two places in the last lap for his best finish yet.

Bryan Staring
“It goes without saying that I am happy with my best result so far in MotoGP. At the start of the race I was struggling a bit but then I got into my rhythm and found the confidence to push. I am still gaining experience in this class and I think we are on the right track to start making big improvements. It’s a shame to miss out on the points but I am determined to get there soon and I am sure that with the help of the team, who continue to offer great support, we will do it soon.”

After leading all three days in the first Sepang Test two weeks ago, Repsol Honda’s Dani Pedrosa maintained his position at the top of the time sheets while Valentino Rossi swapped to the 2012 Yamaha M1. […]

Cycle Torque had Brian Dyer’s gallery from the MotoGP weekend.