WITH three models of Caponord, your local Aprilia dealer has an adventure bike for you – there’s the Strada, which is the basic model excellent for the urban jungle, the Touring, excellent for long-distance rides across any road and the Rally, with its off-road laced rims and sturdy luggage for the more serious dusty travel.

The three models offer significant differences from each other despite sharing the same motor and styling.

The Caponord Rally is the most expensive and fully featured of the range. It also has the most adventurous abilities and styling, the tough-looking laced tubeless wheels being a real standout.

At 19 inches the front wheel is the favourite compromise size for adventure bikes – few have a 21-inch wheel like you’d find on an enduro machine, whereas it’s not a potentially nervous 17-incher, either.

That decision, combined with Aprilia’s choices of steering geometry, suspension quality and wheelbase are some of the reasons the Caponord rally is great to ride on loose surfaces.

Adventure bikes are big business these days, so technology is being thrown at them to give an edge over the competition and give average riders more confidence when the conditions get tricky. Aprilia has lots of interesting technology in the Caponord Rally and it all helps make the machine one worth having a good hard look at before you throw down money for one of its better-known competitors.

There’s also the hard panniers, rectangular units which look designed to take the punishment of adventure riding. They also have an innovative twist – you can open them normally (which often results in the contents spilled all over the ground, like most vertical-split panniers) or just flip a quarter section of the lid, effectively giving you access similar to top-loading panniers. With 33 litres of capacity, they’re a good size, too, and with the exhaust exiting relatively you don’t lose pannier capacity to muffler accommodation.

The Rally is more protective of rider and bike thanks to the larger adjustable screen than fitted to previous Caponords and engine guards, there’s some really interesting technology incorporated into the machine which interfaces with you smartphone to help with GPS mapping and entertainment and an array of interesting options.

The Rally is fitted with the latest versions of Aprilia’s Dynamic Damping (ADD), which is semi-active electronic suspension. When ADD is running the electronics are continuously monitoring the suspension and adjusting the fly – and the dash lets you know this with an LCD which is almost continuously changing – distracting at first, but only for the first tankful of juice.

I loved the ADD about 99 per cent of the time. It smoothes out the bumps without making the bike mushy or letting it wallow, so bad roads, speed bumps and corrugations are far more comfortable to get across than you’d expect.

It was only when charging hard on a good bitumen road that I felt the ADD didn’t suit my riding style. I wanted more damping… so I took over manual control and adjusted the suspension, via buttons. Easy, quick, fuss-free and you know what? I reckon my complaints about the suspension were about personal feel, not actual problems, and that owners will get used to the characteristics of the ADD and never change it – and they will be able to ride very fast in any conditions.

Make no mistake, this is an open class bike with excellent performance. Sure, it ‘only’ produces around 125 horsepower, which is down on some of the competitors, but away from a track I doubt you’ll ever notice. Power delivery thanks to the ride-by-wire throttle and excellent fuel injection system is silky-smooth, and you can tailor it to you needs via rain, touring and sport engine maps.

Unlike some adventure bikes, you have control over most of the electronics. The three-level Aprilia Traction Control and ABS can be switched off if you want to pull wheelies or lock up tyres, both of which can be fun, especially on gravel roads. The rims will even take narrower than standard tyres, which could be good if you were getting seriously dirty.

But in the end this is a touring motorcycle, and at that job it’s superb. The upright riding position is really, really comfortable, and there’s an option for a lowered saddle or an even more comfortable gel seat. I didn’t ride the bike with a pillion, but Aprilia claim the back seat is wide, flat and designed to prevent passengers sliding forward, and there are standard grab rails.

Fuel capacity is 24 litres, so the touring range is excellent. I really enjoyed riding the Caponord Rally, because it was relaxing to ride – the beat of the big V-twin motor, the convenience of the standard cruise control, the comfort of the riding position and protection of the fairing made riding all day easy and fun.

There is a whole array of accessories available for the Caponord Rally, including a matching 52 litre top box, approved Arrow exhaust, offroad footpads, carbon-fibre guards and most importantly, heated hand grips – standard the bike has the switch, but they aren’t there.

Introduced in 2013 as the 1200 Caponord, the bike is now known as the Touring to differentiate it from the Rally and Strada models.

Chris Pickett tested the bike for Cycle Torque in the September 2013 edition, which you can read online at www.cycletorque.com.au or get the whole edition on your iPad or iPhone via the Cycle Torque App, or read it at http://issuu.com/cycletorque.

The short story is the Caponord Touring is a great bike – it’s capable in sports riding, eats miles effortlessly when touring and even has neatly designed panniers which don’t stick out too much when you’re in traffic.

The big differences between the touring and the Rally is the Toruing is more road biased – cast wheels with a 17-inch front, plastic colour-matched panniers and a smaller screen for a start.

The changes make the bike that little bit better on bitumen, and it’s a little cheaper, too. I found the 17-inch front wheel a little more confidence inspiring when riding hard on the road, but broadly speaking it’s very similar to the Rally.

I also rode one on a good gravel road and it wasn’t just capable, it was downright fun. Australian riders have this aversion to 17-inch front wheels on adventure bikes, and if you’re riding in really soft or muddy terrain, fair enough – but that’s where 200+kg of adventure bike is really hard work anyway, and the manufacturers have spent a lot of time and money over the years getting the smaller wheels to work well away from bitumen, so unless you plan to do lots of unsealed road riding, you might be better off on a Touring. 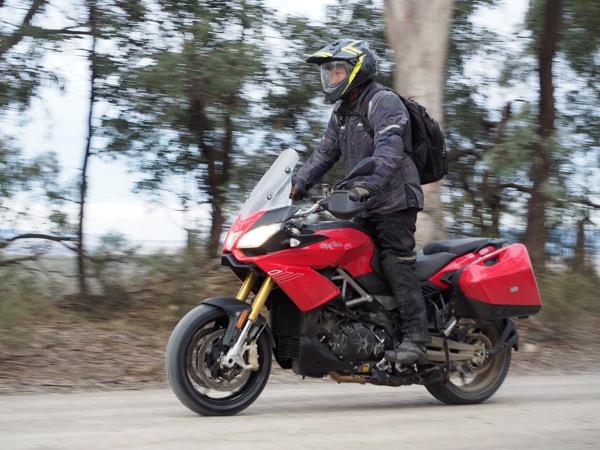 The Caponord Strada has been introduced as a base model – it has conventional suspension and the panniers are an option, but it’s a little cheaper and lighter than the Touring or Rally.

I loved the Strada, which surprised me. I thought the suspension was nicely set up and probably because it didn’t have any luggage just felt that bit nicer when slipping around the traffic and getting around town. the riding position is excellent, sitting up and seeing what’s around you, while the grunt engine made getting from point A to point B easy and fun.

If you don’t care for the latest in high tech, the Strada could be for you. 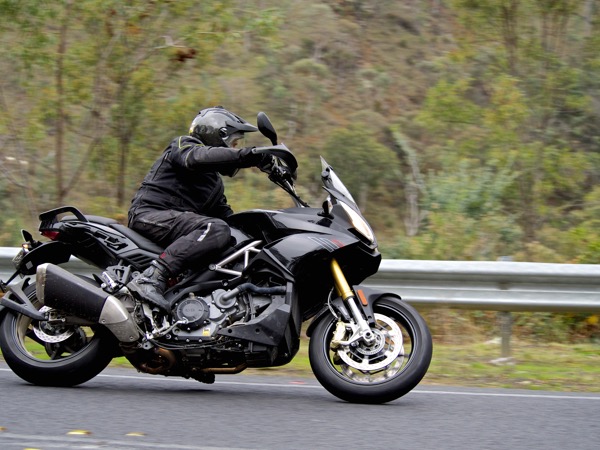 You don’t see too many Caponords on the streets and parked outside outback pubs, but I really think the Rally could change that. It’s a very capable bike, with an excellent level of specification for the price. It’s not as off-road capable as the highest-priced Adventure bikes, but it’s at least as good as the standard models from other manufacturers, and good value, too.

The Touring is capable of taking you comfortably on long rides and at high speed if you choose. Maybe it should be the Caponord Sports/Touring… and the strada is a bike I’d ride to work if I had a long commute.

1200cc bikes aren’t usually considered commuters (and financially it’s a crazy idea) but the way the Strada carves through traffic and jumps kerbs would turn the morning grind into the morning grin.