All eyes will once again be on Toby Price as he looks to make it a three-peat at the 2016 Tatts Finke Desert Race, June 10-13.

This year has been stellar for Price, who has taken line honours for both the Dakar Rally and Abu Dhabi Desert Challenge.

Another win would equal Randall Gregory’s record at five in total, but Price said up and coming riders will look forward to the challenge.

Price will obviously be hard to beat, but KTM teammate Tye Simmonds will be looking to get the job done.

Simmonds recently took out the E2 class at Round 6 of the Australian Off-Road Championships at Murray Bridge, claiming the outright fastest time of 41:43.692.

Simmonds was also runner up to Price at last year’s Finke.

Ralston claimed fourth outright at Murray Bridge and second in the E3 class.

Ralston’s teammate Josh Green will be out of action, after undergoing knee surgery earlier in May.

Green tried to manage the troublesome knee throughout the AORC season but his riding and results have suffered.

“I have battled the discomfort and the uncertainty of my knee for the past few rounds and the last weekend proved that I’m unable to race at my usual speed so it was best to get the surgery done as quickly as possible,” Green said.

“My goal is to race overseas full-time and both AJ and Ray have been so supportive of that and working with the Active8 Yamaha team and racing against the men is all geared to prepare me for international competition,” Jones said.

Active8 Yamaha team manager AJ Roberts said his aim is “to take her riding to the next level so she can continue to succeed on the world stage,” and certainly a solid result at the Finke will help get her there.

ATVs and Side by Sides

This year’s event has received 16 entries in the boosted UTV class with a further 17 running naturally aspirated machines.

Shock waves swept through the community when they awoke on Sunday to the news of Matty Mingay’s hideous crash in the Stadium Super Trucks series in Detroit USA. Now stable, Matty has a long recovery ahead of him.

The star studded list of Finke competitors this was set to feature Mingay, as well as Cody Crocker, and Phil Lovett scheduled to take part in the UTV competition. 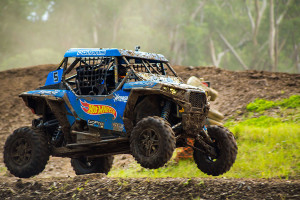 Mingay is perhaps best known for his motorcycle stunts at V8 Supercar events throughout the nation, appearances in movies such as Mission Impossible, and more lately driving one of Robbie Gordon’s Super Stadium Trucks both in Australia and the USA.

Before the accident, Mingay was looking forward to the event.

“I had an insane amount of fun last year and when Polaris told me I was getting the big-banger RZR XP Turbo for 2016 I was stoked,” Mingay said.

“The RZR XP 1000 astounded me last year with its power and handling and ability to handle those massive motocross jumps. To have all that plus 30 per cent more horsepower and turbo grunt is thrilling.

“I’ve always wanted to do Finke and can’t wait to have a crack at it.”

Tamworth’s Iain Hughes from Eagle PowerSports Tamworth has stepped in to take the ride.

“I remain torn over this,” Hughes said.

“I raced Finke last year but dusted my engine, and hadn’t entered this year so it is great to get another shot at it, but no one plans for it to come about this way.

“If I could click my fingers and have Matty back in the driver’s seat right now, I wouldn’t hesitate.”

As for Cody Crocker, his credentials are impeccable although most recently he had a slight hurdle coming out of blocks at round one of the Australian Off-Road Championships in Mildura.

Crocker was in a commanding position to take out a round one win of the Superlite A class, however a broken shock saw the lead slip away while they implanted trackside repairs to make it to the finish in third place.

“This season is full on with six SXS Championship events plus the three AORC events,” Crocker said.

“These events are much better suited to the average punter too as the cost of time and travel is substantially less than ARC.

“Combined with the production based format for the events, it also means anyone can buy a vehicle off the showroom floor and with a few CAMS mods, be super competitive.

Phil Lovett is a genuine Finke Desert Race legend having won the event on two-wheels on three occasions (1981, 1982 and 1985). More recently Lovett has been competing in the Australian Superbike Championship alongside his daughter Sophie.

This year he is competing in a Can Am Maverick Rotax 1000cc in the Superlite B category.

In the ATV categories, seventeen entries have been received in the up to 40 years age category with 14 riders entered for the over 40 age division.

A strong mixture of KTM, Honda, Yamaha, Can-Am, Suzuki, Polaris, and Bombardier machinery is represented in both classes.

2015 ATV winners Paul Hughes (up to 40) and Dale Harris (over 40) will each be looking to take respective line honours again. This year, Hughes will be aboard the Can-Am X, while Harris will look to get the job done on a Yamaha YFZ450R.

King Shocks Australia has also announced it will offer a test and tune session at the Finke.

Michael Zacka from King Shocks Australia said “we’re very proud of the fact that last year’s King of the Desert, Hayden Bentley, won the event on King Shocks, that makes it two years in a row for us.”

The two-day off -road, multi terrain two-day race for quads, bikes, cars and buggies through desert country from Alice Springs to the small Aputula (Finke) community.

The race is held each year on the Queen’s Birthday long weekend in June.

The racetrack follows the route of the old Gahn which ran through the centre of Australia from North to South before being moved further West.

While some companies are abandoning the 600 Supersport class, Yamaha has built a new YZF-R6. […]