The learner market in Australia is so big these days it seems as though the manufacturers are in a LAMS war, just like the sports bike war that’s raged for many years. In fact it’s probably more important than the sports bike market in pure sales numbers. Yamaha’s new YZF-R3 is the latest small capacity LAMS bike from Yamaha, built specifically to take on the Kawasaki Ninja 300, which itself has enjoyed plenty of sales success over the last few years.

Yamaha is using the ‘R’series of machines as a marketing tool with the new 321cc machine, saying it expects the buyer to be a first time rider in the 17-30 age bracket, especially suited to commuters or someone stepping up from say a dirt bike. And it’s priced right to suit these buyers too, The R3 has a price of $6999. After riding this bike I believe it’s quite the bargain at that price, especially how good it rides and handles. And seeing how this is the only member of the ‘R’ family that’s Vale 46 endorsed it’s got to have extra street cred hasn’t it? 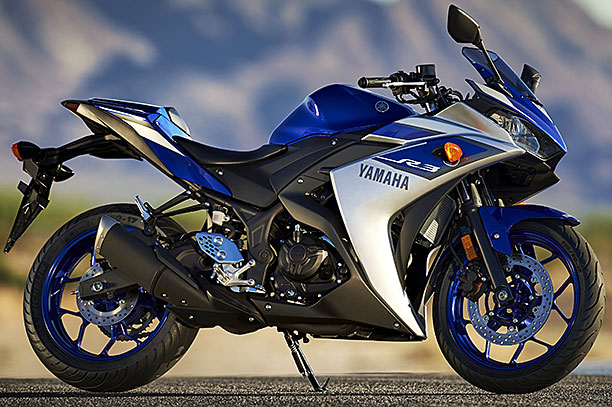 The little parallel twin cylinder engine certainly likes to rev and pumps out 35 horsepower, with that number produced at 10800rpm. As you would expect, torque isn’t huge, 18.9 lb-ft at 9200rpm. This makes it competitive in the LAMS capacity market sector Yamaha is targeting. Not the strongest but not far from it. The all-new donk has an offset cylinder design, 180 degree crank layout, narrow valve angle, four-valve head, 11.2 comp and a Diasil cylinder and forged piston. For most LAMS riders that is pure gobbledygook and would mean absolutely nothing but it’s part of what makes this little engine a pure sweety. None of these capacity road bikes are what you’d call punchy off the bottom but once underway and revving a bit the R3 is fun to ride and reasonably flexible. If you are riding quickly you do need to keep the engine on the boil to get decent acceleration out of corners, and luckily the bike has a smooth shifting six speed ’box. I guess you could say the engine is designed for sporting use and loves it when you use it aggressively but it’s pretty happy tootling around at commuting speeds too.
You can see the ‘R’ series DNA in the styling of this bike, including the 10 spoke wheels. It looks more like an R6 than it does a new R1 though. The rest of the rolling stock is what you’d expect from a small capacity LAMS machine, which is built to a budget to suit said broke LAMS riders. It uses 41mm KYB forks, a single shock, twin-piston caliper and so on. Nothing special about it but nothing wrong about it either.
Two things that will appeal to riders of smaller stature are the 780mm seat height and the 169kg wet weight. Overall it’s nicely built, to a price of course, and boasts the quality and I expect, the reliability you get from a Yamaha.

There’s plenty of room for tall riders on the R3, so unless you suffer from over extended limbs you will be comfy. I expected my 95 odd kilos to cause a bit of grief for the R3’s suspension, which has no adjustment on the front and pre-load only on the rear. But no worries there at all, even when hard under brakes, which themselves were well up to the task, even though it only has one two pot calliper on the front. Quick changes of direction on a track would normally highlight any issues the suspension might have, especially with a fat bastard perched on the back. The fat bastard testers on the launch made no complaints so I assumed all was good there before my first session. And when this fat bastard jumped on the frightened R3 I also found all was good with the forks and shocks. I suspect most of those riders in the 17-30 age bracket Yamaha is targeting won’t be my size so the bike will feel even better to them.
One bike at the launch had an accessory pipe on it, which sounded horn, and I’d most likely fit one to my R3 if I was a noise and speed crazed learner. As an example the Akrapovic stainless steel slip on muffler costs $420 and gives half a horsepower increase but a handy 1.9 kilo less weight.
At 7000rpm this bike is doing around 100km/h so even freeway work is fine. I’m not saying I’d be keen to ride to from Sydney to Melbourne but it will do it ok.

I really think this bike will be a big seller for Yamaha and it deserves to be. The range of LAMS bikes available these days is astonishing, and you only have to look at bikes like Triumph’s Street Triple 660, Ducati’s Monster 659 and Yamaha’s own MT-07 to see what the top end of the LAMS market is like but some of these are double the price of the R3.
There’s more great LAMS bikes of course but that’s a good example of the top of the sports LAMS lineup, and I see the R3 as a sporty learner machine. It looks the goods and is the goods. 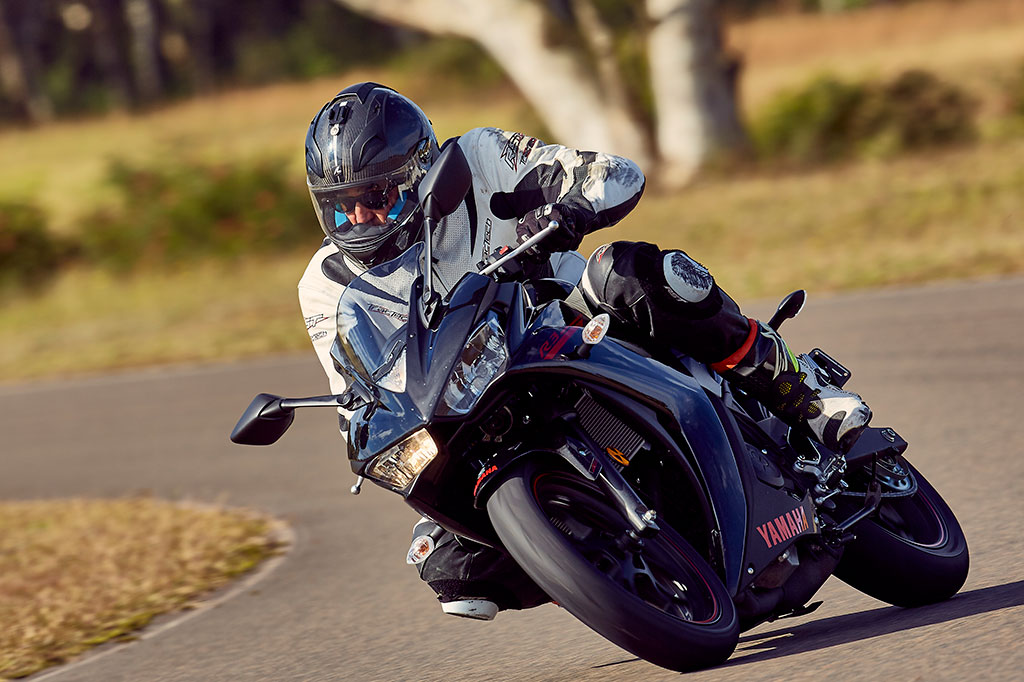