RARELY does a legend motorcycle racer have a son who follows in his foot-steps and last month we looked at the racing life of multi Australian, Victorian, South Australian and New South Wales scrambles champion George Bailey, this month we look at how his son Andrew fairs against the best riders in Australia.

While doing research for a little side project I became the latest fan of 1950s scrambles champion George Bailey.
There isn’t a current racer that could dream of emulating George’s racing record (99.999% wouldn’t have the ticker anyway) and as I was to later discover that multi Queensland Motocross Champion Andrew Bailey is in fact George’s son.
Here is Andrew’s story.

George has stopped racing in the late 1950s but by the early 1970s his sons Robin and Andrew had caught the dirt bike bug so George and Glad were back at the same tracks that George had won so many titles on watching Robin and Andrew belting out laps and for Andrew in particular cutting his teeth for future success. Robin definitely had the talent as a dirt bike racer and placed well at several major events as a junior racing the likes of future champions Gary Flood and Mike Landman but Andrew was a dead-set chip off the ol’ block.

Andrew Bailey had the same style and steely determination of his famous father battling with the likes of Grant Cramer and Ron Dinsdale during his early years of racing with his first real success being a 3rd place in the 1973 Australian Junior Motocross Championships in Canberra before garnering his first state title by winning the Victorian Junior Short Circuit Championship in 1973 after a ‘ding-dong’ battle with Dinsdale.

At 16 years of age Andrew won his first State title as a senior by winning the Queensland 250cc Short Circuit Championship then backed that up by partnering Kerry Gray to the 250cc class win at the annual Maryborough 3-Hour before showing that he had lost none of his motocross skills by winning the A-Grade All-Powers class at an open Gold Coast motocross meeting.

Remember, Bailey is still just 16 year old. During 1976 Bailey took out second place in the prestigious Queensland Suzuki Motocross Series to Steve Cramer the at the 1976 Australian Motocross Championships Bailey was again pipped by Cramer for the national 125cc title while it was Kiwi legend Peter Boyle who nudged Bailey out of the winning spot in the Queensland 125cc Motocross Championship. 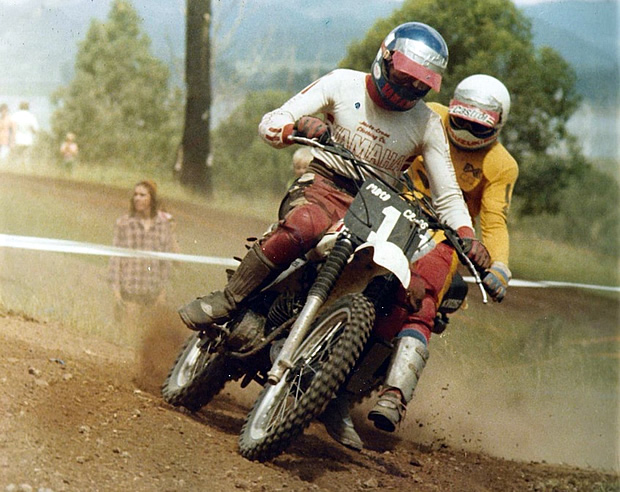 Motocross legend Stephen Gall had this to say of Andrew. “Andrew was always a tough competitor, back then I lived in NSW so Andrew was labelled as one of the best Queensland riders. His love of the sport continued after his racing days with involvement in a Motorcycle Accessory company and now actively riding in the Vintage MX scene.”

George played a big hand in Andrew’s racing in the early days by tuning the bikes and according to Andrew he never really pushed his youngest son beyond his limits but he did offer a lot of good advice that stuck with Andrew and paid dividends more often than not.

“Dad would often offer advice with the main theme being, ‘never give up son, never give up’, and that was the one thing that stuck with me and I can recall several times during my racing days when riding flat out all the way to the finish line put me a few more places up than I would have been if I had simply ridden around in the dying laps, in fact, it was that advice that saw me pass Stewart McLachlan on the very last lap of the Queensland Motocross Tile at Tivoli Raceway in the late 70s.”

Andrew’s best opportunity to win an Australian Motocross Championship came in 1980 when he was leading the 500cc class ahead of Australia’s best factory stars when the head studs pulled from his YZ465 thus blowing the head gasket so with the Yamaha sounding like an old chaff-cutter Bailey soldiered on to second place behind championship winner Trevor Williams.

Andrew stopped racing at the top level in 1981, went on to get married and have two children Reid and Dan, started a motorcycle accessories distribution business in Brisbane with his old sparring partner Steve Cramer in the early 1980s before forming Pro Accessories with business partner Greg Parker a few years later.
In fact, Pro Accessories continues to be a successful business today while Andrew is still out and about riding and racing with young Dan on his CRF150R going riding with his dad at every opportunity and I can tell you from personal experience, they both get around at a very good pace.

Glad had this to say of her late husband. “George was the most relaxed, laid back, humble and beautiful person I have ever met in my life, nothing phased him, but for sheer determination and yes ‘pig headiness’ there was no one who could match him. He wouldn’t let anything beat him if he could help it and he could fix anything.”

And of Andrew, “I believe Andrew’s success was due, apart from his natural ability and dedication, to his strength, relaxed manner, quick reflexes, and a total love of the sport. George and I got a lot of pleasure from watching the boys race. We enjoyed the sport and they all grew up with it, they didn’t have much choice really! We also believed that the family that plays together stays together”.

Nothing is surer that motocross is a better sport today thanks to George and Andrew Bailey, die hard dirt bike enthusiasts with a passion for the heat of battle that spans from the late 40s through to his very day is as rare as hen’s teeth and needs to be celebrated. So, on behalf of the whole dirt biking fraternity, I tip my hat with the greatest of admiration for George and Andrew Bailey.

If you look on the international stage, second generation champions can be counted on one hand but right here in our own back yard we have a father and son who have achieved an enviable scramble and motocross championship haul. […]