Yamaha has released the details of its 2018 YZ450F motocrosser, and it looks like an absolute rip snorter.

Gone is the kickstarter, and the integration of Yamaha’s propriety power tuner has been coded into a free app for iOS and Android devices.

Yamaha says “the new motorcycle is born out of the white heat of competition,” which is another way of saying the 2018 bike is based on what the pros did to get the most out of the earlier model.

Yamaha has credited guys like AMA Champ Cooper Webb and MX World Champion Romain Febvre as being involved with development of the new model.

The biggest changes are revolutionary – the 2018 model will be the first YZ450F to drop the kickstart assembly and run with a lithium-ion battery/starter motor, while the Yamaha Power Tuner (around $400) appears to have bitten the dust, with a new app created in its place.

It’s a safe bet that both technologies are here to stay.

The free app can be downloaded from iOS and Android app stores and works via Wi-Fi and a communication control unit to make fuel and ignition mapping changes.

A log function allows you to make notes about the riding location, condition, bike settings, so it can help with bike set-up.

The app can also monitor a range of data such as race settings, maintenance and system diagnostics, engine run time and more. 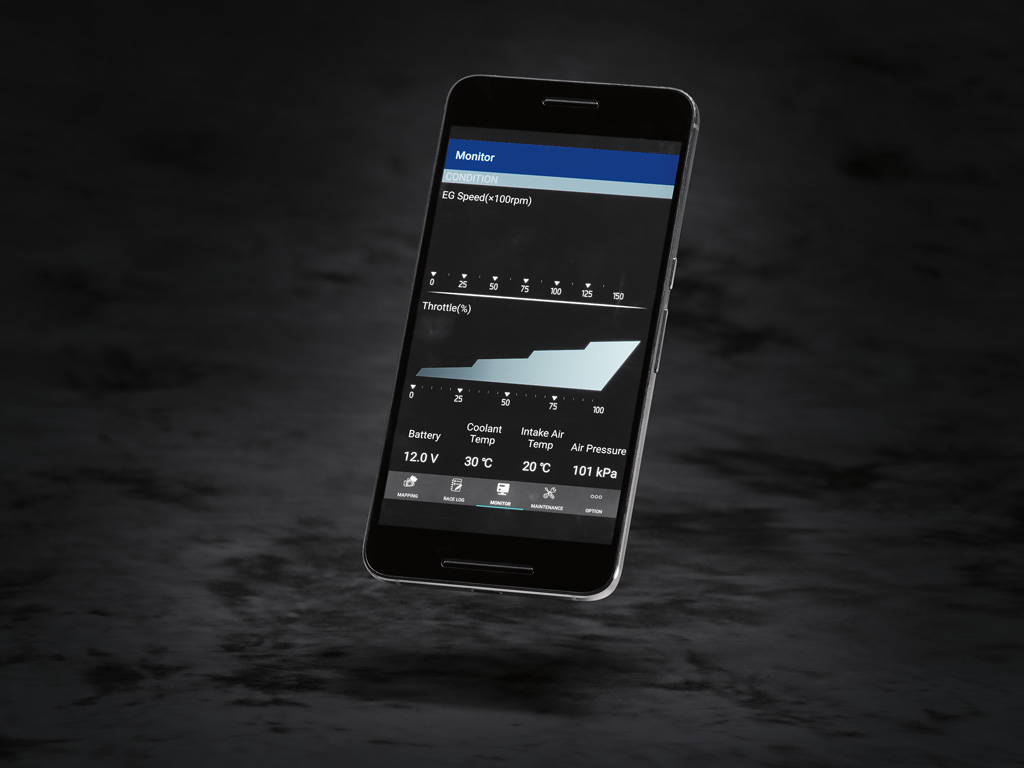 Yamaha had to shave lots of weight from the bike to make the switch – even with the starter motor, battery, a bigger radiator and more fluids the new bike tips in at 111kg, one kilo less than the previous model.

The rearward-slanted cylinder engine design along with the weight-centralised wraparound exhaust remains, but Yamaha has opted for a lighter cylinder head and made the cylinder slant more upright to work with the bike’s new frame to further optimise weight distribution.

The front-end has increased trail, with thicker KYB forks and suspension settings, along with changes to valving to improve oil flow and damping.

The frame is new and has been designed for the best possible balance of bump absorption, stiffness and cornering, while the swingarm is now lighter and shorter.

A new KYB rear shock has been used to match the new chassis and swingarm with a lighter and stiffer spring, and the reservoir has been increased by 30cc to improve cooling.

The geometry changes result in a 5mm longer wheelbase, with more ground clearance and rear travel.

The rear-end of the exhaust has been moved forward to position the muffler closer to the centre of mass.

The transmission has been overhauled – there are revised gears, clutch plate updates and a stiffer outer clutch pressure plate to improve durability.

Larger radiators have been used and angled more directly to improve cooling.

Tom Sykes (Kawasaki Racing Team) has taken the fifth Tissot Superpole of the season at the Donington Park Circuit with a lap time of 1’27.378. Scoring his 15th career pole position the Huddersfield born rider equals Colin Edwards at sixth all-time for Superpole wins. […]