THE side-by-side performance/race market has been dominated by North American based manufacturers, until now. Yamaha has built one angry, ill-tempered and crazy side-by-side which will surely have to sway some side-by-side buyers to the Japanese way of thinking.

Powered by a three cylinder inline engine, the YXZ1000R screams like a banshee on heat and accelerates like a cut snake. 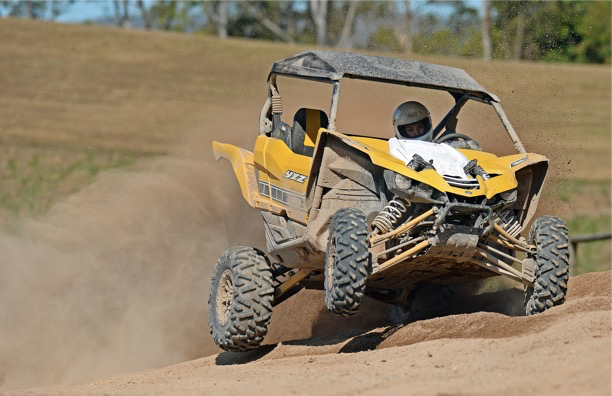 Machines like the Polaris RZR and the Can-Am Maverick are powered by V-twin engines with CVT auto gearboxes. Until now no manufacturer has built a serious performance side-by-side with a manual gearbox, so not only did Yamaha go with an inline triple it went the full hog with a manual ’box with a sequential shift. This makes it very much like driving a car.

The RZR and Maverick have dominated off-road side-by-side racing simply because there’s not much else to buy if you want to race. That might make it sound like they are not up to the job but that’s not the case. I spent one of the most enjoyable afternoons in this job driving a Polaris RZR across the Mojave desert a few years ago and they are an amazing bit of kit. After talking to some old hands at this off-road racing the Yamaha might have to be further developed a tad before it can take on the modified racing Polaris and Can-Am jiggers but when it is then it’s game on.

It’s hard not to be impressed when you see a YXZ in the flesh. It looks ultra purposeful and when you get inside there’s room to burn. It’s comfortable and feels like it’s meant for one thing only… to go flat out.

I first assumed the 998cc engine was taken from the MT-09 roadbike but according to Yamaha insiders it’s a powerplant used in snowmobiles, originally 1050cc but now reduced to 1000 for the YXZ. Power is around 110hp according to the same insiders, and as you would expect it is fuel injected.

Further delving into the mechanicals you can see the engine is very solidly mounted, therefore reducing the prospect of broken engine mounts, apparently a common occurrence on side-by-sides with flexible engine mounts in race conditions.

It looks as though much thought has gone into making this machine as race ready as can be straight from the factory, with a radiator mounted out of harm’s way and fully adjustable long travel Fox Podium RC2 piggy back shocks. 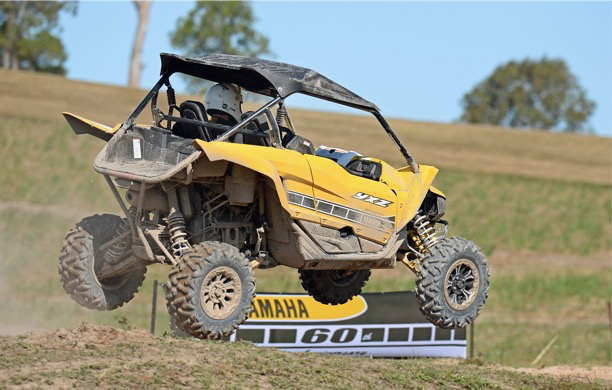 My first sample of the YXZ1000R was with Mr Motocross god Steven Gall at the wheel. Besides racing motorcycles at the highest level in Australia, Gall also raced sprint cars and speedway midgets for many years so he knows how to read terrain and pedal an off-road racer, whether it be two- or four-wheeled. A couple of laps at his pace showed what the YXZ is capable of and hearing that three cylinder engine on full noise was a wonderful thing indeed.

When I got behind the wheel I found it easy to drive. It needs some revs to get off the line cleanly and without stalling but once underway the sequential gearbox was dead set easy to use and dare I say, more ‘car like’ than other side-by-sides I’ve driven. I noticed the YXZ ‘bucked’ around more with me at the wheel than it did with ‘Gally’ but I put this down to his quicker pace gliding the machine over the bumps rather than hitting every one like I was.

One thing I always liked about the Polaris RZR was its suspension, and I have to say during my short drive the Yamaha YXZ felt as good, which is high praise.

Prices aren’t released just yet but talk is it will be between 25 and 30 grand. Get one now and get it ready for next year’s Finke!