When you look back to the history of Dakar racing, Yamaha’s Super Ténéré was at the forefront of the sport for a few years, then all of a sudden it went off the radar. The Europeans lapped the bike up but it was never that popular in Australia. Adventure bikes just hadn’t imprinted themselves on our psyche at that stage…

In 2010 Yamaha re-released the XT1200ZE Super Ténéré to the public, and while the new ST had certain design cues from the original, like the parallel-twin cylinder engine, it’s nothing like the Dakar racers of today, not like the original was 25 years ago. Named after the Ténéré desert region in the Sahara, these days the ST is more gentleman’s adventure tourer than Simpson Desert assault weapon. 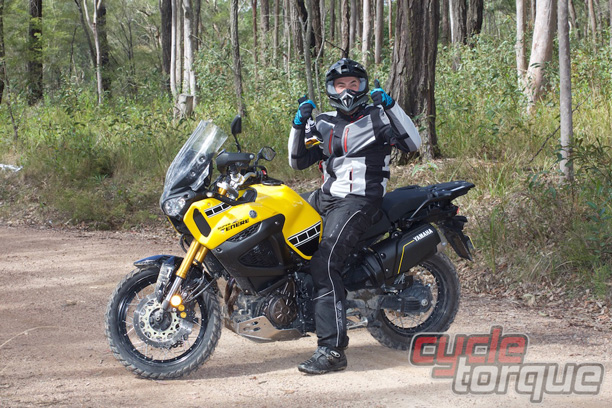 Sitting on its sidestand you are well aware the bike is designed for fun adventure riding and touring, not for single trail work. It’s a big bike, with a big tank, a big engine and everything that goes with it.

Even though the engine is 1199cc it’s still been designed to be as compact as possible. In Yamaha fashion the gearbox is positioned in a way to allow a shorter set of crankcases, and the six speeds are widely spaced, perfect for the intended use of the bike. In keeping with this on and off-road philosophy is the shaft drive and 19- and 17-inch laced wheels with road-biased adventure tyres.

Right of the bat, I liked how the Super Ténéré has a bullet style of cowl instead of the bird’s beak style of fairing that is commonly seen on this style of adventure bike and in my opinion: Yamaha’s 60th anniversary colours that it comes in looks plain horn.

It has a riding position made for long distance, with a great seat, massive tank, and good protection thanks to the screen. Manually adjustable, the screen works well but cannot be adjusted on the move. You can switch from sitting down to standing up easily, and even though the bike isn’t small it never feels ‘too big for the job’. The Super Ténéré is off-road capable as far as adventure bikes go, though this machine isn’t meant for hard-core off-roading, aimed more towards those dirt roads which take you to the secret little hideouts you think only you know about.

In standard trim the ST has a number of off-road style features such as a skid plate, Barkbuster-style handguards and of course that lovely long-travel electronic suspension to wave away the bumps. You can select a myriad of different settings via the multi-function handlebar switch. There’s four pre-load, and three damping settings, so if you can’t find something to suit the conditions you will be hard to please.

The standard seat gives you an inch of adjustment to play with, but for the extra shorties or the long riders among us there is a lot of options available from the accessories catalogue. An optional low-seat is available which is narrower and lowers the seat height around 40mm over the standard seat and a windscreen is available that is almost 50mm taller that standard. There is also a range of various sized travel bags suited for those long hauls into the wilderness.

Rounding out some of the notable features which come standard on the ST is cruise control and dual cat-eye projector headlights. Honestly I was a bit sceptical about the cruise control but since using it I don’t know why most bikes don’t come with it standard. It’s widely accepted that adventure frames should be steel as they provide more give in rough terrain. It’s always easier to find a bloke with a stick welder in the Outback than one with a TIG welder… Yamaha has continued the steel set-up with the latest ST, but it does have an alloy subframe, which is more likely to be damaged in the event of a spill. If the ST’s steel frame is damaged enough to need welding, chances are you’re in a painkiller-induced alternate reality and don’t give a stuff about the bike anyway. Yamaha says the frame design is part of the whole mantra of trying to get the weight as low as possible to help with manoeuvrability, and fair enough: it feels lighter than it looks.