The entertainment spectacle was confirmed today by the AGPC in a joint announcement with the International Entertainment Group (IEG) and Motorcycling Australia that will see some of the world’s best female Supercross riders in action at Phillip Island.

X-Games Silver medallist, 18 year-old Meghan Rutledge (pictured above and right), praised the event organisers saying that it was exciting to see women getting their own Supercross races in Australia. 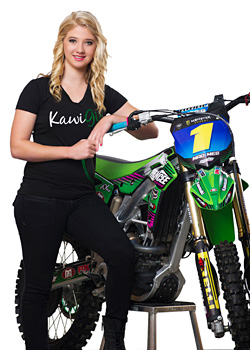 “This is fantastic! I was absolutely shocked and delighted when I heard about the AWSC as I never expected it to happen in Australia. It is such a huge step forward for female racing.”

Two rounds will be held during the event, with accumulated points crowning a Champion, during the World Championship MotoGP event on 20 October. Each round will consist of two five lap races and a seven-lap race.

“The Supercross Championship has proven to be a crowd favourite and with the introduction of the women battling it out in their inaugural challenge, there is sure to be non-stop action all weekend,” said Westacott.

IEG Managing Director Yarrive Konsky said the event is the perfect place to showcase depth of female talent in Australia and thanked the organisers of the 2013 Australian Motorcycle Grand Prix for their support.

“Australia has some of the fastest female Supercross riders in the world and I’m glad that we can work with the AGPC to show them the respect they deserve,” Konsky said.

Following the success of the 2012 event, the Australian Grand Prix Corporation has introduced a new Grandstand ticket option at the Lukey Heights Supercross track for fans wishing to reserve their seat.

The big guns are fit and firing: that’s the message coming out of Europe as world superbike pre-season testing comes to an end in the northern hemisphere […]