OVER the years Triumph’s Tiger has evolved from a pseudo-adventure bike – more show than go in off-road ability – to the bike we have today, a half-faired sports-tourer with no dirt pretensions at all. Not that that is a bad thing: Tiger buyers were always looking for a comfortable all-day ride, with good torque produced by the motor and all-round ability considered more important than outright performance.

In recent years the Tiger has been one of those ‘all roads’ machines – able to take on poor secondary roads through its long travel, plush suspension without being an adventure bike – with a 17-inch front cast wheel, wide tyres and tipping the scales at over 230kg, you wanted a well-formed gravel road to feel comfortable off the bitumen.

But times change and Tiger owners – and potential new owners – were telling Triumph to make the bike more road-oriented, sharper in the twisties and a bit more comfortable. The most famous of the British marques has delivered. 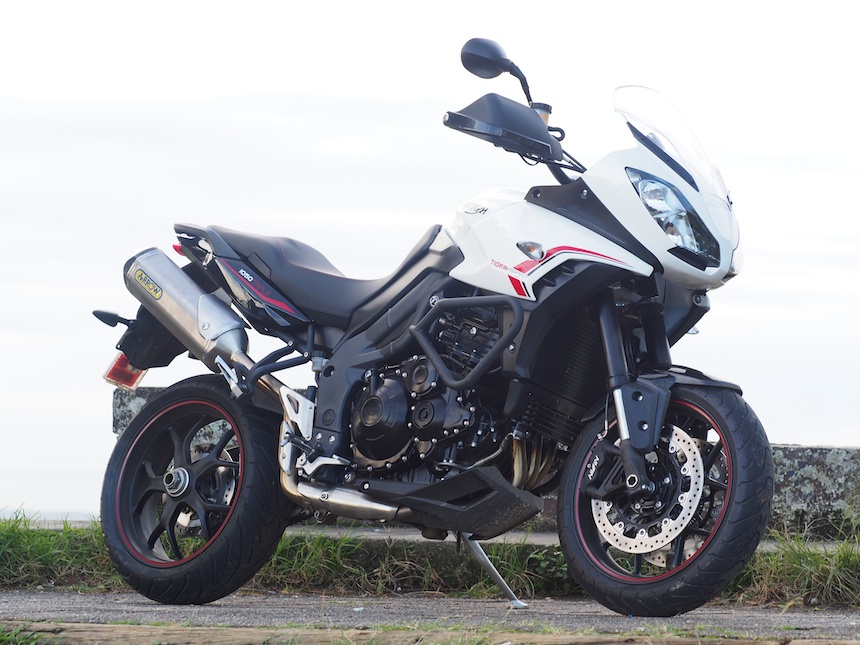 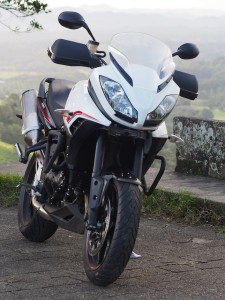 Stiffer suspension, 10 more horsepower, an extra dollop of torque, tweaks to the ergonomics and more aggressive lines have given the Tiger Sport a new, sharper, focus. It handles better, especially in on good road surfaces, the suspension settling the bike much quicker before tippling into turns, allowing deeper braking and letting you get harder on the throttle coming out. Suspension travel has been reduced from 180mm/170mm (front/rear) to 140/150mm. That’s still longer than most sports tourers, so don’t expect it to flick into turns like a Daytona 675, but it’s certainly sharper than the old model. There are all sorts of updated components, from the new airbox and its deep induction noise to the new aluminium and stainless steel muffler (although the bike I rode was equipped withg the optional Arrow muffler, which is both lighter and boosts power, without significantly changing the noise level). Updates to the EFI and airbox have help reduce fuel consumption, despite the increase in power. The neat instumentation includes fuel consumption readings, and my test bike average 14.9km/L on the day of the launch, which gives a potential range of nearly 300km. The headlight has been updated for better spread and penetration. That’s really what Triumph said during the press conference. The chassis has been updated, especially at the rear, the bike now sporting a single-sided swingarm, a new subframe, a lower seat and new wheels. Most of this is for styling’s sake – a single-sided swingarm actually makes the bike heavier, but they look great. It does it comfortably, too, with an upright riding position which is comfortable all day – no aches and pains in the joints after five hours of riding through a mix of twisty secondary roads, crowded highways and even some over policed freeways. While the joints may have been fine, I was a little disappointed in the new seat, which gave me a bit of numb bum syndrome after 3-4 hours. Although Triumph has taken a little of the ‘step’ between the rider and pillion passenger out with the new model, it still locks the rider into one position, which isn’t ideal. 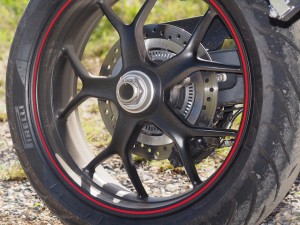 The first of the modern Triumph Tiger’s were introduced in 1993, with an 885cc four-stroke triple powering the machine. These days its 1050cc, with a ride-by-wrie throttle and excellent fuel injection. As I mentioned earlier the power is up 10 ponies, but probably more importantly the torque is up 6Nm, and significantly up from 3000rpm. This Tiger stomps out of slow corners and is particularly effective in carving up traffic. Triumph has been evolving its 1050 triple for years and years, and it really shows in this machine. Silky-smooth delivery of the 120-odd horsepower through through the six-speed box – now with a lower top gear – makes this machine a fast road bike.

Tigers are typically bought by 47 year old men – shit, that’s me! Seriously though, I do see the attraction: comfortable (my minor gripe about the seat notwithstanding), fast, economic (the price is unchanged the new bike is the same as the outgoing model, $15,990) and versatile, the Tiger certainly ticks a lot of the boxes I want ticked in my wish list for sports-tourers. Owners of earlier Tigers had a few beefs, including the clunky gearbox (a feature of all Triumph 1050s) so the company has done some work there, and a firm left foot never misses anything. It still a bit noisy, but we were told during the launch they bad in and get quieter with a few kilometres on the odometer. Another beef was pillion accommodation. The outgoing model put the passenger up high behind the rider, where they caught a bit more of the wind blast than many liked, so a redesign of the back of the motorcycle has dropped the passenger seat 40mm. Motorcycles built for two are often also called upon to carry the kitchen sink, too, so Triumph has made panniers and a top box avaialble (although they hadn’t arrived in the country at the time of the launch). The top box is available with a 12 volt power socket and passenger backrest). 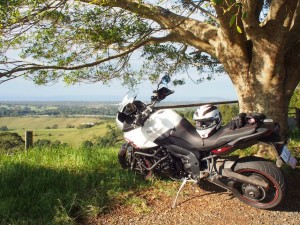 The Tiger Sport is a really versatile mount. Through the Gold Coast morning traffic it threaded its way without fuss, the upright riding position giving a great view over most tin-tops and the wide, flat-ish ‘bars allowing easy manoeuvring in traffic. In winding roads the Sport moniker made sense, especially when compared to earlier models, and when you hit the freeway the fairing blocks enough of the blast to make a transport section an inconvenience rather than a chore.

The old Tiger sat between the 1200 Explorer (a serious Adventure machine) and the Sprint GT (sport tourer) in the Triumph range. I’m surprised Triumph chose to move it closer to the Sprint, rather than Explorer – it’s now competing for interest with a host of capable machine, whereas it was firmly in the ‘Any Road’ category. Unlike machines like the Kawasaki Versys and Ducati Multistrada, the Tiger doesn’t come with dual-purpose rubber. It’s now firmly a road bike, a versatile sports-tourer at a competitive price. 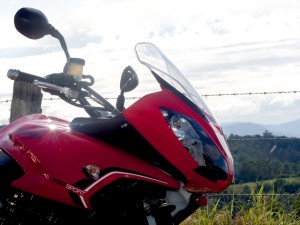 Triumph has breathed new life into the Street Twin for 2016 by improving the performance and handling with more grunt, better suspension and updated styling. […]

Triumph’s Speed Triple has been updated in 2016, and its R-spec version with Öhlins suspension and over 100 engine changes make for one prime naked… […]