So, straight up we were into Melbourne rain, which means slippery tram lines and a myriad of other obstacles. After a quick photo shoot it was into the warmth of a trendy, dare I say it, Hipster, cafe for brekkie.
Now this is where I’m going to put something else out there. Triumph is using the new age Hipster movement as a bit of a marketing benchmark for the Street Twin, and I get that entirely, the bike really suits that ‘style’ of riding or living. But what I don’t get is why so many people like to bag the Hipster thing, seeing them as flash in the pan motorcyclists. I’m no Hipster, I’m nearly 50, I’m bald, have a 38-inch waist and no beard for a start, but if they want to dress and style their hair in a certain way then so what? All those people bagging them are doing exactly the same thing, whether it’s a jacket with a heap of patches on it, a grimace when riding their bike, or a full leathers bound crotch-rocket pilot. We are all trying to fit into some style we never invented in the first place so give them a break. Anyway, the bike as far from just being a city poseur, as I was about too find out. 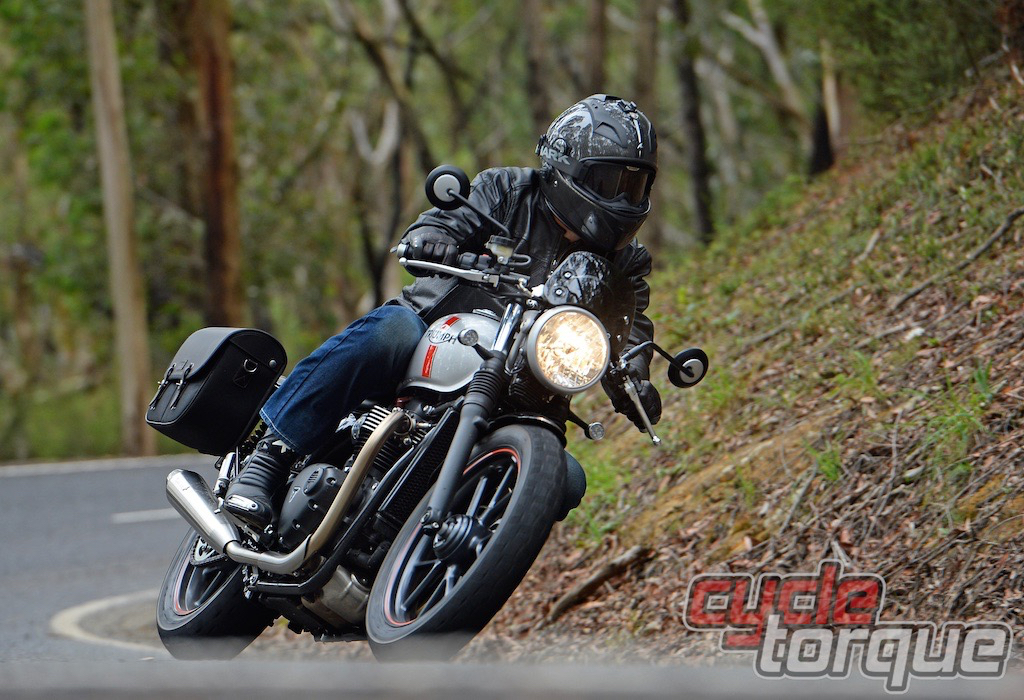 Into the Melbournian wilds we went, roads I am familiar with from numerous bike launches. There’s some fantastic riding on the outskirts of Melbourne, and the Street Twin felt like it was made for them. It didn’t take long to revel in the extra torque of the new donk. Back when we were getting the press spiel the night before, we were told a story about American magazine testers saying it had heaps more power than the previous model, when asked by the Triumph press crew. As I said earlier, it actually has one pony less, but the extra 18 per cent torque makes it feel like it has 20 more. To paraphrase that old rogue Enzo, ‘Horsepower sells cars, torque wins races’. That’s what it’s like in the real world.
I’ve seen many race bikes tuned for more top end power only to lose it where it often matters, in the mid range and off the bottom. In the real world the Street Twin feels substantially faster. The gearbox is sweet too, five speeds, with fifth a real overdrive. This had me in fourth most of the time on the twisty roads, giving good punch out of corners.

It also handles much better than the previous Bonnie. You can ride this bike hard, ground clearance is good, the single front brake is good enough, the rear shocks are much better and the forks do a good job too. After a few hundred clicks of blasting around the back roads, through the city and freeways I felt great. The seat is better than the previous Bonnie but it’s still not going to get any awards for backside comfort, not like its adventure sibling, the Tiger 800.
Other touches I liked were the funky modern speedo (no tacho) and the LED taillight which has a little smiley face lighting up when the rear brake is applied. Sort of naughty and neat at the same time.
Disappointingly the fuel tank is smaller than on previous models but because of improved fuel consumption Triumph claim the range hasn’t suffered.

If I bought one, I’d have to have the high level V&H scrambler pipe, it sounds to good to leave off. I’d get the chunky hand grips, the bash plate and maybe even the flyscreen. I’d also keep the standard seat.
I loved the way it makes its power and that it’s so easy to ride and enjoy, without doing Mach III everywhere. Top speed is around 160km/h, and that will suit the intended buyer for this bike anyway, where top speeds don’t really matter all that much.

As Molly Would Say

Do yourself a favour and check a Street Twin out. Prices at $13,350, without any accessories, and I think that’s a bit of a bargain, especially considering it is a major improvement on the previous Triumph Bonneville.

OVER the years Triumph’s Tiger has evolved from a pseudo-adventure bike – more show than go in off-road ability – to the bike we have today, a half-faired sports-tourer with no dirt pretensions at all. […]

Recently Cycle Torque reviewed the Triumph Bobber, and it’s been such a success Triumph has already announced an even higher performance model. […]

TEAM Moto is celebrating 20 years of the modern Hinckley built Triumph motorcycle, offering a trip of a lifetime to the 2014 Isle of Man TT races. […]