YOU could use one word to describe Triumph’s 2013 Street Triple R, and that word would be effortless.
Well, maybe that doesn’t give you the complete idea of how fun it is to ride, so maybe we’ll throw in exhilarating as well.

But how can a bike which is exhilarating also be effortless to ride?
The secret to that is exhilaration and fun go hand in hand, and getting to that ‘fun’ point on the Street Triple R is oh so easy. 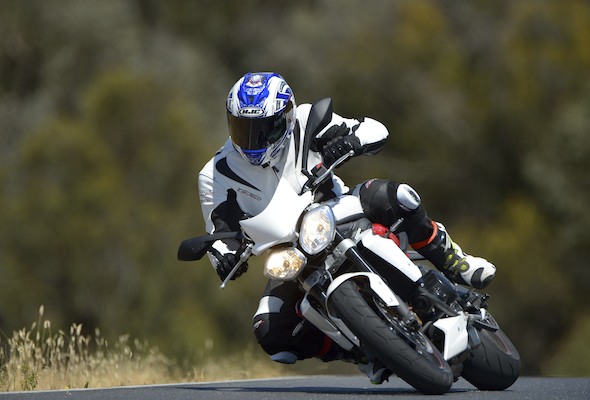 When the base model Street Triple was first released in late 2007, with its slightly de-tuned Daytona 675 donk, it had basic suspension.
A naked Daytona everyone thought, but that wasn’t really the case, as it didn’t have the adjustable suspension of the middleweight Triumph sports machine.
But it was still lots of fun to ride, and a very good everyday machine. It was followed about a year later by the ‘R’ version which had adjustable suspension, better brakes and quicker steering.

It was definitely a sharper bike to ride, but both bikes shared the same engine spec. Both bikes have been popular with punters, we think mainly because they are so easy to get along with. Not everyone needs or wants a 1050 Speed Triple, and in tight winding roads there’s little to tell them apart anyway. Of course when the roads open up the extra grunt of the Speed Triple comes in to play, but it’s horses for courses. 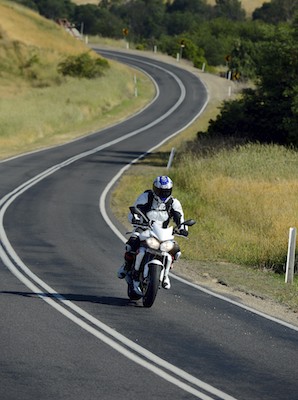 Styling has obviously copped a revamp but it still looks similar to the older version.
The main changes are the seat unit, side panels around the radiator, and the under-slung exhaust which replaces the under-seat muffler.
Remember when under-seat exhausts were the new rage? Now they seem old hat. What is old becomes new again. We prefer the low muffler. Paint highlights here and there also change the look to a degree.
In our opinion the new ‘R’ looks more modern and sharper than the old one, so the stylists/designers got it right.

Getting to that ‘fun’ point on the Street Triple R is oh so easy.

Both the 2013 Street Triples get a new chassis which looks not unlike the old one around the tank, new wheels, the spokes of which look amazingly slim, a new alloy bolt-on rear subframe, revised swingarm, and slightly sharper steering again.
The overall weight saving from these changes is six kilos, 3.5 of that comes from the exhaust. Ready to rock ‘n’ roll the Street Triple R tips the scales at 183 kilograms. Engine wise there’s hardly any difference.
The most noticeable is the taller first gear which makes it nicer for the road. It makes it harder to pull wheelies or get a lightning good start, but then again we wouldn’t expect to see too many of them getting raced.

While fuel economy was never all that bad, the engineers have made it better by playing with the throttle bodies and fuel injection system. The result is an amazing 30 per cent drop in fuel usage in city environments.
The improvement is reduced somewhat as speeds go up but overall it’s an impressive result. Outright power is still the same, 105 ponies at just under 12000 rpm.

Jumping on the bike at the airport we immediately noticed the seat was higher than before. It’s actually 15mm higher (now 820mm), and most riders will appreciate the extra room. Unless you are very short we don’t think it will be a problem.
On the open country roads the rear shock was slightly firm but not worth stopping to soften it. Both the fully adjustable Kayaba front and rear ends felt as though were on the softer end of track settings, a good compromise though, especially as were to hit the track the next day. 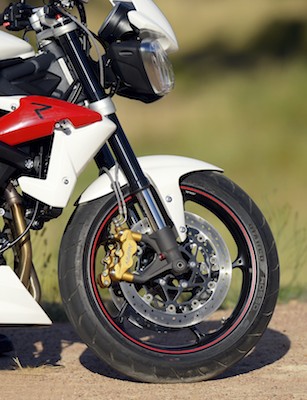 The afternoon ride was a fast cruise 150 kilometre run and it showed just how easy this bike is to ride. Day two saw us at the Broadford circuit in country Victoria. This circuit is perfectly suited to the Street Triple R. It’s tight but has a long back straight which allows you to fully test the top speed which runs out close to 230 km/h. That said, the next corner is basically a 90 degree turn so you can’t watch the speedo for too long…

Endowed with enough power to be a shed load of fun but not enough to really catch you out, it really is a hoot to ride. It’s so confidence inspiring to ride too, whether you are hard under brakes, mid corner or hard on the power on exit the little naked bike just doesn’t seem to do anything wrong.
On one occasion we find ourselves in a three-way dice with two other launch participants (racing other journos on a launch, geez that’s a first) and we fell foul of crash corner, the 90 degree one we mentioned earlier.

Running out of room and talent we found ourselves inadvertently backing the Street Triple R into the turn and then running out of tar.
We managed to stay upright despite heading up a grass hill and jumping a ditch or two. Shaken but not stirred we re-entered the track in one piece. We hate to think what the result would have been if we were riding a fully faired sports bike.
It would have been like a plane crash.

The brakes weren’t to blame for this little incident, rather trying to brake later than possible. But the brakes have an odd sort of combination, with Nissin four spot calipers and 310mm discs on the front (there is a switchable ABS option), and a single piston Brembo caliper on the rear. According to Triumph this is the best combination tested and that’s the reason why it’s used. Fair enough.

On the track the suspension was simply superb for our pace. There was no reason to change the settings as the bike felt stable and planted all the time, even over the double ditch jump. 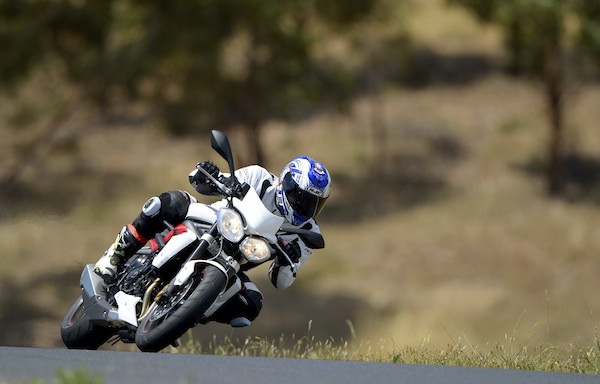 If you want a bike which is all about fun then you should seriously look at the Street Triple R, or the less equipped Street Triple.
This isn’t just a bike which is all about riding flat out though.
It will happily commute or take you on a weekend away, although you’ll have to pack light.
Pillions can be catered for but only for short distances, unless they get a kick out of that sort of stuff…

At $13,490 it’s cheaper than a Daytona and a bargain actually, it’s more fun at legal speeds, and it’s a whole lot more comfortable too. If you choose the ABS option you’ll be expected to pay an extra $500.Getting to that ‘fun’ point on the Street Triple R is oh so easy.

Triumph has announced the addition of two new Tiger 800 models – the XRT (Touring) and XCA (adventure), to appear in dealerships this June. […]

Triumph’s Bonneville Bobber may not be the best new bike to come out of Hinckley in 2017, not that you’ll care… […]